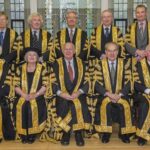 The perils and possibilities of law as a tool for social transformation have been debated by legal scholars and advocates for social justice for many years. Entire forests have been consumed to print the debates amongst proponents of Critical Legal Studies (CLS) and their interlocutors. Into the fray comes David Renton’s new book, Against the Law: Why Justice Requires Fewer Laws and a Smaller State. A British political activist and barrister, Renton is the author of many political books, including biographies of Trotsky and C.L.R. James. He is also no stranger to grassroots movement organizing. These biographical facts situate Renton’s skeptical position and explain his passion for change from below. As disclosed in the brash title, the argument of Renton’s book is that political activists should not rely on legal advocacy, be it public interest litigation or the advocacy of new legislation, as the central focus of their work. It also serves as a radical history of contemporary British politics in the last few decades.

The book consists of three parts of equal length, plus an introduction and conclusion. Focused overwhelmingly on the British state and legal system, the book begins with a discussion of the relationship between neoliberalism and the massive expansion of laws and regulations that has occurred in recent years. A second part details his analysis of populism. The final section is devoted to his program of dejuridification or moving away from the use of law. Throughout, Renton adopts a breezy style that is more popular than academic, making it more understandable to the non-specialist reader.

Renton begins by arguing that the expansion of laws and regulations undermines the potential of liberating social movements in several ways. First, laws may be used to repress social movements such as labor organizing. Renton documents how the rise of neoliberalism was accompanied by the implementation of laws that made it more difficult for workers to strike, such as requiring a mandatory strike vote. He capably recounts the role of intellectuals like Hayek and Friedman in helping change public discourse to center the values of the market. Second, instead of focusing on political organizing, an engagement with law channels working-class grievances into a long, drawn-out grievance process before an administrative tribunal, which is highly bureaucratic. I would add that it requires flattening the rich lived experience of workers into technical legal language that is alien to workers and often also fails to fully capture the complexity of their complaints. Third, there has been a growing emphasis on individual rather than collective rights. Renton usefully traces this history, noting how it fits the values of neoliberalism. The growth of law related to civil liberties may be contrasted with the failure to expand socio-economic rights. While Renton mostly confines himself to British examples, one can readily identify this trend in many Western democracies. For instance, the willingness to expand the right to assisted suicide in a growing number of countries but not the social benefits and attendant services required for people with disabilities to lead full lives is a prime example.

The second chapter highlights two examples that indicate the problems with relying on the use of law to promote social transformation: rent control law and employment law. Renton is at his best when he documents how neoliberal reforms, such as savage cuts to legal aid programs in Britain, undermined the ability of tenants to enforce their rights. Despite the articulation of a right for the middle class to purchase their own homes, the reality on the ground was one of adversity for tenants who could no longer recover money damages through the legal aid process in most circumstances. These technical changes have a dramatic impact on working-class lives and are often invisible because the right remains intact but in practice cannot be enforced. Similarly, Renton documents how the rise of disputes at Employment Tribunals, often with exorbitant fees for making claims of discrimination, accompanied a sharp decline in strikes as workplace grievances were directed into legal channels. Karl Klare famously analyzed how judicial interpretations of the Wagner Act deradicalized workers struggles in Depression Era America and Renton’s commentary illustrates this process in play in Britain. While these issues are prevalent throughout Western democracies, Renton occasionally highlights particular measures that seem rooted in specifically British problems. The failure of the British government to not address what Americans refer to as intersectional discrimination, for instance, has not been matched in, for example, Canadian human rights law which at least accepts the doctrine, whatever the flaws of the underfunded Canadian system may be.

The third chapter highlights problems relating to big data and the adoption of online courts. Renton correctly identifies the dangers of privacy violations when large corporations have access to personal data. He provides examples of how a construction industry body, the Consulting Association, often provided employers inaccurate information on construction workers and their propensity to engage in strike activity in exchange for fees. Surveillance capitalism needs to be reigned in and Renton’s hard hitting approach is insightful and informative. Nevertheless, I think that at times the presentation is too one-sided. Technology also has the potential to make courts more accessible to people with disabilities and those who must travel long distances.

Renton then provides an illustration of right-wing dejuridification through an account of the Brexit process in Britain. He shows how conservative parties and organizations articulated populist anger against distant bureaucracies in Belgium that were overregulating a beleaguered populace to lobby for change. He offers a detailed analysis of a legal challenge to the British government’s decision to trigger the departure of Britain from the European Union without a Parliamentary vote. Yet the British government’s focus on curbing immigration detention appeals and environmental regulations suggests a selective approach designed to strengthen the executive branch, undermining democracy. Weaving into this analysis are short accounts of Max Weber and Carl Schmitt. While this selective treatment only scratches the surface of the many scholars (for instance, famously Harvard Law professor Duncan Kennedy) who have engaged in issues relating to the limitations of law as a tool for social transformation, Renton’s style is always crisp and accessible. Renton rejects a conservative vision of populism and instead advocates a left-wing program of dejuridification.

Against Law or Strategic Litigation?

The final section of the book provides an account of Marx’s critique of the ideology of law and outlines the limitations of environmental law to address climate change. Renton identifies law’s role as mediating inherently antagonistic class interests in the state. While interesting, the discussion of Marx, like Renton’s occasional references to international law, seems out of place in the book and too brief to make a substantive contribution. With respect to environmental law, Renton is undoubtedly on strong ground as bad actors often delay enforcement while pollution and the extinction of threatened animal and plant species continue unabated. In crafting his own vision, Renton suggests that advocates focus on building mass movements rather than on strategic litigation. There is certainly much truth to this perspective. At the same time, cause lawyering in the United States and Canada has resulted in tangible victories on the ground in many areas. Recent class action litigation in Ottawa, Canada, against far-right trucker protestors, for instance, has succeeded when police abandoned the community to anti-vaccine mandate extremists. Socialists should keep an open mind and consider when cause lawyering may effectively assist and not hinder grassroots activism. In arguing for a simplification of the law, Renton’s analysis rings true. A universal set of rights accorded to all workers, full-time and part-time, unionized or not, would go a long way toward building solidarity. Packing an abundance of information in a short volume, Renton has written an original and insightful book.