Review of Palestine, A Socialist Introduction 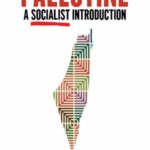 Palestine is one of the most controversial issues among liberals and even among some socialists. In the U.S., politicians and university administrators war against the Boycott Divestment and Sanctions (BDS) movement against Israel, also labeling it as anti-semitic.

This is the most damning and yet most ludicrous charge against the Palestinian liberation movement. Calling for basic democracy and equality in Israel/Palestine is condemned as a hatred of Jews. The charge is itself anti-semitic. It blames all Jews for the oppressive, destructive and anti-humane policies of the Zionist state. Equating anti-Zionism with anti-semitism is like calling opposition to South African apartheid “anti-white”. Any state that privileges one race, religion or ethnicity must be opposed , even if the favored group was previously oppressed. Palestinian activists have been clear that their rejection of Zionism is not based on opposition to Judaism. It is instead based on opposition to colonialism and racism. This hasn’t stopped the slander.

The slander campaign orchestrated by the Israeli government, the U.S. government and their allies, hasn’t worked. Young people, including young Jews are more and more critical of Israel. Part of the reason for the slander campaign is the desire to counter the declining support for Zionist oppression of the Palestinians

This book is a very important introduction to the issue but it is much more. It explains clearly why anyone concerned with equality and democracy should support the Palestinian cause. Just as importantly, it explains to supporters of Palestine why they should be socialists. Further , it examines in detail important controversies among supporters of Palestine which can shape strategies and tactics. All along it calls for activism around the issue especially highlighting BDS

The “Roots of the Nakba: Zionist Settler Colonialism” lays out the basis of opposition to Zionism. This explains the nature of Palestine before the Zionist colonization, the alliance of Zionism with imperialism and the reactionary nature of Zionism from its inception in Europe. It is clear from this description that Palestine was not “ a land without people” as the Zionists claimed. Palestine was a well developed thriving society that was displaced by the expulsion of the Palestinians called the Nakba.

This is followed by “How Israel Became the Watchdog State: U.S. Imperialism and the Middle East”. Israel was backed by the USSR , Britain at France at first. The U.S. became its main backer from the late 60’s on. This alliance was based on the complimentary interests of the U.S. and Israel, not the “Israel Lobby” that some on the left blame. This alliance resulted in Israeli support for regimes the U.S. was reluctant to embrace, Guatemala, South Africa etc.

“The Price of “Peace” on Their Terms” explains why the “peace process” has been a disaster. It was always aimed at the consolidation of Israeli power over the Palestinians, not at creating a viable Palestinian state. Palestinians who opposed it were correct to see it as a Zionist/Imperialist process, not a road to liberation.

Why did the Palestine Liberation Organization go along with the “ peace process” that did not further the needs of Palestinians? This is explained in the “Price of “Peace”..” The background to this capitulation is laid out in “National Liberation Struggle: A Socialist Analysis”. The author examines the political weaknesses of leading Palestinian organizations. Just as important, he explains the class basis of those politics. He clearly outlines the class conflict of the Palestinian elite and the workers and farmers of Palestine. He lays out a socialist solution to the oppression of Palestine based on the regional working class.

This discussion of political strategy continues with “Not an Ally: The Israeli Working Class”. This is a very good update on “The Class Nature of Israel” in the Struggle for Palestine. It explains why the Israeli working class is not a potential revolutionary force. This is very important. Some on the Left defer to the Israeli working class and so oppose BDS and are even weak on the right of return for Palestinians—This is true of those in the CWI/Militant tradition and now the U.S. SWP, which has become conservative on other political issues. This chapter focuses on the overwhelming privilege of the Israeli working class in relation to the Palestinians and how its benefits are based on Zionism/dispossession of Palestinians. The analogy they use is local economies that are based on a state prison. The chapter spends a fair amount of time examining the effects on the political attitudes of Israeli workers that come from the Zionist structure.

A similar strategic discussion is contained in “Multiple Jeopardy: Gender and Liberation in Palestine”. The role of women and LGBTQ people is often ignored or downplayed in liberation struggles. This chapter rightly corrects that omission in regard to Palestine, stressing the leading role women have played. Just as importantly, it explains the necessity of any movement for liberation taking up gender issues.

Related to this is the important historical and current discussion on the links between Black Liberation and Palestine in “Cops Here, Bombs There: Black Palestinian Solidarity”. The issue itself is important in explaining why oppressed people should support Palestine. It also puts Palestinian liberation in a broader context. It focuses especially on Black-Palestinian solidarity from the 1960’s onward and finishes with a discussion of Palestinian support for the Black Lives Matter movement from 2014 onward.

This broader context is explained further in “Palestine in Tahrir”. It discusses the Palestinian movement in the context of the Arab Spring. This reinforces the idea that the liberation of Palestine is an international issue.

This international dimension is taken up in the important international BDS campaign in the interview with Omar Barghouti, international leader of BDS. This interview is very important since it outlines the most important contribution that those outside of Palestine can make to the Palestinian cause. This is further motivated in “Afterword: Its Time to Move”

Finally the importance of seeing Palestine as part of the struggle for human liberation generally is explained in the introduction and the final sections. Imperialism is an integral part of capitalism. Zionism is dependent on Imperialism. Liberation of Palestine must be connected with the struggle against imperialism and capitalism. These issues are taken up in “About This Book” and “Conclusion: Revolution Until Victory.”

This is an important contribution both to newcomers to the issue of Palestine, and to long time activists and socialists concerned with strategy and tactics in the movement