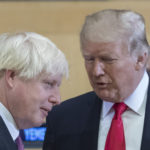 If you’ve had the displeasure of tuning in to Fox News at any point over the last ten years, you’ll know that they’ve played no small part in turning the U.S. into a right-wing hellscape. A place where male political analysts scream over each other about women’s reproductive organs and companies can price-gauge lifesaving medication at the expense of the very worst-off in society.

Fox News hosts Brett Baier and Tucker Carlson often refer to Britain’s cradle to grave healthcare system, which is free at the point for those who need it, with the dreaded term: “socialised medicine.”

Referencing waiting lists and one-off horror stories, the likes of which you are likely to read in The Daily Record, as a way of discrediting the National Health Service and its benefits for the UK

Does Fox News know better than the British public?

The British public might not agree with Fox, but there is one political group that almost always do. A fairly-new wave of conservatives, commonly referred to as “alt-right,” seem to endorse the idea that bad = socialist, regularly using terms like “Cultural Marxism” to belittle anything they consider to be remotely politically progressive.

Whether it be the LGBT Community, female video game protagonists with proportioned bodies or just the rise of Islam in countries they’ve never been to. You’ll very likely have someone complaining about their freedom of speech being infringed by an invisible, all-seeing Communist institution preventing modern society from functioning in a bizarre range of ways.

For a sub-culture that claims to be completely anti-establishment, the American alt-right sing from the American mainstream media’s hymn sheet on a regular basis with regards to immigration, political correctness, healthcare and their choice of insult.

You may have caught an example of this on British television recently when U.S far-right pundit Ben Shapiro appeared on This Week to be interviewed by BBC Political presenter Andrew Neil.

Shapiro gave reference to the “radically left-wing media bias” in the U.S., whilst yelling over Neil as is commonplace on U.S political news.

He eventually became flustered with the veteran presenter and accused Neil, who is the current chairman of Press Media Group who own right-wing magazine The Spectator, of being a member of the left.

Shapiro later apologised by saying he: “misinterpreted his antagonism for political leftism.”

Luckily the U.S American right helped elect a candidate its working-class following could rely on in 2016, the current U.S. President Donald Trump. Trump has done wonders to tackle the evils of socialism by putting harsher sanctions on Venezuela and introducing 2017’s intelligently named Tax Cuts and Jobs Act.

The TC&JA was a hard-line conservative economic initiative which saw tax cuts for corporations and left 13 million Americans without health care.

The billionaire-turned-President then did something else entirely anti-socialist; he scrapped the Paris Climate Agreement – the United Nations’ initiative for dealing with greenhouse gas emissions, mitigation, adaption and finance.

While no one could accuse Mr. Trump of being a socialist, I think many people in America may have the wrong idea about what has happened.

Corporate America is sucking the planet dry and Trump is a prominent and long-standing billionaire right at the heart of that culture. With the alt-right provocateurs railing against invisible socialism they’ll never admit they’ve been duped into giving their support to Trump at the cost of the U.S. public.

The danger of U.S. reactionary populism reared its ugly head in the UK during the Brexit referendum. Following the shocking Leave vote, British journalists uncovered that Vote Leave and LeaveEU illegally purchased 2.7m of Brexit ads on Facebook.

Some dark-ads told outright lies about Turkey joining the EU, whereas others were even more ridiculous, amongst those were sad looking polar bears, an ad where Boris Johnson said he “is pro-immigration but” and exaggerated statistics about the migrant crisis.

VoteLeave and LeaveEU were not the only ones in the “dark-ads” game either. lobbying firm Lynton Crosby also purchased £1m worth of creepy Facebook ads of the same type, whilst posing as a grassroots organisation of Brexit activists.

It is widely believed that this made a substantial impact on the way people voted in the referendum. Facebook refused to disclose any information to the U.K parliament regarding how much they were given and who by.

This lead UK journalist Carole Cadwalladr to do a Ted Talk entitled “Facebook’s Role in Brexit and the Threat to Democracy,” where she said: “Mark Zuckerberg, you are on the wrong side of history.”

The lies in the ads were amplified, just like in the U.S., by alt-right figures like Paul Joseph Watson and Milo Yiannopoulos.

To me, this shows that we’re not we Brits aren’t that different from our American cousins. If nothing else it shows that establishment figures are able to ride the populist wave to make political gains at the expense of the public.

Look at Boris Johnson, the only politician to be featured in the dark-ads. Johnson’s comments last year about Muslim women in the Daily Telegraph were repeatedly compared to Trump’s tirades against Muslims and Mexicans in the run-up to the 2017 Presidential Election.

A bad attitude masked by perceived stupidity isn’t the only thing these two have in common. In July 2018 Johnson began meeting with ex-Breitbart.com editor and Former White House Chief Strategist Stephen K. Bannon.

The British mainstream media celebrated the brilliant advice this mentor would give him, Johnson continued spewing his vitriol, at one point comparing Brexit talks to a “suicide vest.”

This is typical of Steve Bannon and his influence, a former investment banker and self-professed expert in right-wing populism who, although having very little credibility remaining in intellectual circles, is incredibly far-reaching in certain more extreme Internet circles.

His tenure at Breitbart means that he has ties all over Europe and has used them to promote right-wing populists all over the continent since leaving the Trump Administration.

Bannon’s most recent endeavour has been the implementation of what has been described as an “alt-right Academy.” The Academy for the Judeo-Christian West’s founders describes it as a “gladiator school for the next generation of populist and nationalist leaders.”

Essentially a “Fight Club” of sorts, it appears the plan is to train skinheads and Nazis in the ways of intolerance and manipulation at an ex-monetary somewhere in Italy, no doubt for the purpose of putting money in the pockets of people like Leave.EU founder Aaron Banks and Nigel Farage in the future.

Bannon is the ideologue behind Trump’s populism, which managed to elect a billionaire as U.S. President on an “anti-establishment” platform.

Our in the UK options appear to be to reject U.S. style personality-based, reality TV politics or accept privatised health care and Nazi training camps.

Trump is a lunatic and should be called one at every opportunity. His foul, reactionary politics are a disease spreading across Europe. If Boris Johnson is to become Prime Minister, he will go down in history as the man who let Bannon get his claws into Brexit Britain and shook the life out of it.