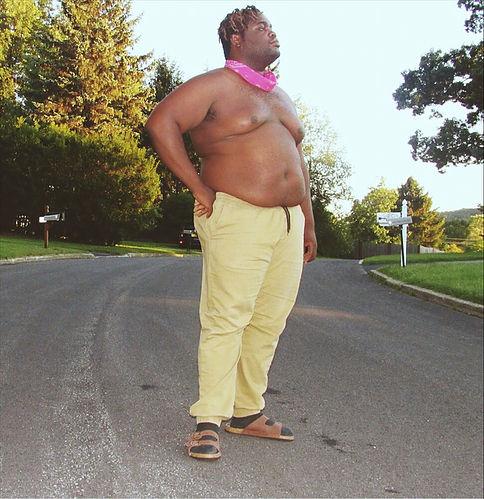 Sophomore year in high school, I started exercising in the school gym after school almost seven days a week. I willed myself to motivation to start doing it. I didn’t know how to start, but I knew the schemata to exercise: you spend thirty minutes to two hours running outside, or on a treadmill, and lifting a few dumbbells in repetitions of ten to fifteen. And after two weeks of doing that, I started to see results. I created my own strict routine and discipline. I lowered my food intake. I only drank water. Ritually, I stopped eating at 6:00 PM every day. And that worked for a while.

Whenever my mom, or my aunts would make food, sometimes they’d ask me if I wanted to eat. I’d militantly say no. I always took account of the time. Say it were thirty minutes past the designated time I decided to stop eating for the day; I’d punished myself with twice as much exercise the following day. So in the gym, men: from freshmen, juniors, some seniors to a few sophomores commended me for my perseverance in keeping up with exercising and losing weight with questions like, “how’d you do it?”

For a while I was brought to have lost this weight. I even felt like my depression was lifted off my shoulders for a while. Previously, I had the idea that exercise would be what would alleviate my stress. Years later, I soon understood that exercise keep me moving, but in no way did relentless exercising mean the suspension of my mental illnesses.

At first, I used to believe everything was changed because of volition—sheer individual conscious decision, that ‘willpower’ was center to what ameliorated, destroyed, or abolished all things permanently. I previously thought will was what would allow me to will my mental illness away, that will is what would advance my exertion toward losing weight, but will isn’t everything.

This logic was horribly flawed, antiquated, rigid, arrogant, and was actually in part of my upbringing, imposing onto myself the expectations of how I thought society and my family, viewed this logic, how I thought they viewed me. It was toxic, untrue. It didn’t make any sense. Sadly, for whatever I didn’t believe did not become a reality, was a result in unmerciful victimized self-blame onto myself.

“Why isn’t this working? I lost weight? Shouldn’t my depression be gone?” would be the nature of my internal dialogue. This was what my train of thinking was like for a long time, unknowingly did I felt overstressed and worried about not following their expectations. Not feeling that my mental illnesses had gone away made me worry of what, for example, my mother and my aunts would believe of me. Excessively did I make my interpretations of how they would feel about me not feeling ‘happy’ from having lost weight an invented belief that floated over my worries.

It was long after Monroe Woodbury High School, after SUNY Orange, that I learned that maybe what influenced me to exercise was not what I wanted. Jokingly, Broly the Legendary Super Saiyan was my influence for wanting to be brawny. A former friend or two I had who would slap my arms and yell to me that I was ‘too big.’ I used to laugh and take these sayings with lightheartedness. My aspiration to be so-called ‘big’ wasn’t really a thing to me anymore. I think what it was, was that I thought that if I was this size, I would be attractive.

I did gain some of the weight back at some point, and lost it nearly as quickly as I gained it back. I read somewhere that losing weight quickly after gaining it is prone to me experiencing severe heart conditions. That wasn’t the main cause of me gaining the weight back the third or fourth time. It was more indifference.

Little thoughts here and there appreciating my body in the state that it was, and sometimes disliking it, disliking my own body so much that whenever I put underwear or pants on, I’d make sure the sides of my stomach were above the pant line over my the sides of my stomach fat. Other times, I’d leave it right at the pant line. It was never consistent. Even now, while I’ve been away at SUNY New Paltz, I’ve gained a bit of weight, but it wasn’t so much sadness that overcame me.

It was more indifference again, like, what was wrong with my body? Nothing was wrong with it? I still had muscle from when I used to exercise strenuously as I first started back during my sophomore year in high school. Don’t get me wrong, I think I’m attractive, sometimes in the colloquially bastardized sense of the word, narcissistic, like “shit, I look good.”

I’d admire how I look when I look my deltoids and my arms, but I guess I’ve learned to start appreciating the all of my Black body, too. And while I should be exercising more often, something affects me differently when I visit the gym than how it did years ago. I’ve learned that when I was appreciated for my arms, my muscularity, by non-Black people, I was being racistly objectified.

And with time, I guess, I became afraid of having exercised to reach that level of physique again? To avoid looking like a racial archetype? I love my Black body, but I would become disoriented as soon as some covertly or overtly racist white person would objectify me. They would even desexualize me via their white racist imagination with this whitewashed assumption that I am somehow…”not like other Black men.”

These people are whom I call covert racists, and what I also call white supremacist credentials: morality, virtue, intelligence, accomplishments, and mostly our labor. Whenever a white man or white woman says they love Black men, or praises a Black man, alive and or dead for our accomplishments, academic, artistic, philosophical, linguistic, physical, spiritual, or otherwise, we are worshipped for our service, under their Whiteness, as if we are indebted to it. White people value Black male life insofar as we subject ourselves to their racist credentials.

They love our Black male bodies and our creations, but look over the fact that we’re human, BLACK HUMANS. Thus in these regards, white people objectify me, whether it be my Black body, my Black dick, or my natural Black hair, making these verbally sexual advances to justify in their minds that I am nothing more than their racist object, and they whitewash and tokenize me to make themselves feel safe, yet, irrefutably, they perceive me as less a ‘danger’ insofar as I am not being unapologetically Black and resistant.

Digressing back to my experiences in going to the gym, I viewed it differently. It wasn’t just me, a Black man, going to the gym, exercising then leaving. It was weird as well walking in there sometimes. I wasn’t looking at my physique as if it needed to be “corrected.”

Before, I ascribed self-worth to my muscularity, but I also learned that at the same time, it was dangerous because of the Black and white male symbiotic homosocial activity that took place there. Whether a man lifted two fifty pound dumbbells with ease and he sounded these weird grunts as if he was plummeting toward his death, or a man looming over another man, voyeuristically observing him as he attempted to bench press 145+ pounds in three to four sets of ten, it was all the same. I wasn’t there looking to be better or stronger-looking than the next man exercising. I’d be there to take care of my Black body.

And it’s so easy to get caught up in long-winded competitive talk about what muscles in my body I’m working out on, or what my technique was, or that I even cared about these things now than I did as an eighteen-year-old teenager. I’m not saying exercise is unimportant, or that a Black man making himself fit is wrong. I’m saying there will always be sociopolitical implications that follow the choices a Black man would make in how his representation might be used against him in imperialist white supremacist capitalist patriarchal culture. It’s important to be aware of what my Black body is getting itself into, whether it be in the gym, at the gas station, in a classroom, everywhere.

My views changed drastically. I don’t believe that my weight determines my worth, and I’m not saying this to earn SJW points. I’m saying this because it’s wrong, ignorant, and fat-phobic to think in that way. I might be overweight, but over time, I’ve honestly come to like my body in the shape that it is. How muscular or refined my face might look shows only how much effort I’m putting into my exercise and that I’m obviously dedicated to fitness, yes, of course, but it doesn’t define my Black beauty.

Aestheticism (noun.) — the belief that our main efforts in life should be focused on creating and enjoying beauty, in all its forms.