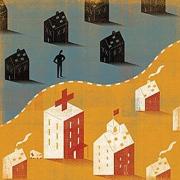 Same Policies in the North

As a proud fourth-generation Connecticut Yankee and longtime resident, I feel compelled to testify that in the '60s the same divisive policies were applied in our prosperous northern, liberal state with the same predictable racist outcomes.

In New Haven, where I was a student in 1961, progressive Mayor Dick Lee, under JFK’s “model cities” program, razed the Black, middle-class Dixwell Ave. neighborhood adjacent to the Yale campus, and plunged a monstrous, unnecessary six-lane interchange highway (the Oak St Connector) like a dagger into the heart of the city, dividing it in two separate and unequal parts.

Not without resistance. Protests included a “Sit-Out” in which residents moved their furniture out onto Dixwell Ave. and sat down in the path of the bulldozers. My fellow-student Eleanor Holmes Norton (later D.C. Representative) and I participated as members of CORE. But our protests were bulldozed, and New Haven never recovered, destroyed by racial segregation that keeps generating new social problems today.

The same pattern holds for Hartford, the state capitol and one of the richest cities (per capita) in the US – now on the verge of bankruptcy with crumbling schools and parks for the inner-city poor (See NYT Aug. 15). [2] I taught at the University of Hartford for thirty years, and watched Hartford decline from the beautiful, livable city I had known as a child into a sort of graveyard of high-rise office buildings, empty at night, where rare pedestrians, late commuters and office-workers, huddle fearfully against the constant gusts of wind under the highway overpasses, to get to their cars, parked in vast empty lots that have never been reconstructed.

The reasons? In the late 1950s the city fathers invited the planners of Interstates I-84 and I-91 to intersect in the very heart of downtown (instead of circumventing the city center), thus creating a permanent traffic jam known locally as “the Mixmaster.” The planners and their local patrons knowingly destroyed the traditional downtown commercial, working-class and mixed neighborhoods, cutting the city off from the Connecticut River and dividing off the predominantly Black North End from the rest of the city with a highway eight-lanes wide – a permanent barrier to inter-racial pedestrian traffic.

Hartford, surrounded by luxurious mainly-white suburbs, is famously dominated by the vastly profitable insurance and arms industries as well as  by universities, hospitals and administrations that don’t pay taxes. So are New Haven and Bridgeport, also among the “poorest” and most racially divided U.S. cities. This is because in the “progressive” 60s the powerful institutions of the super-rich also succeeded in shifting the tax burden for education and social services from the State to the municipalities, who were expected to pay the bill through property taxes on poor and middle-class homeowners. Previously, Connecticut cities, like New York, had had top-flight public schools 80% paid for by corporate takes.

Thus “progressive” Democratic legislatures and city fathers, by dividing the races with permanent concrete barriers and withdrawing support from the poor, white, black and brown, neighborhoods, effectively assassinated what was once a community, and they know it. Every decade the city fathers (they call themselves “angels”) decide to spend millions on grandiose “Renewal” projects like conference centers, stadiums, and pedestrian malls – of no use to the residents – with the idea of attracting motorists to come to Hartford for events. Mega-corporations like Aetna and United Technology also buy full-page prestige ads in the Hartford Courant (America’s oldest newspaper) praising themselves for their “efforts” in the field of education, spending money that could have bought thousands of books for the kids or kept the public libraries open longer.

Conclusion: institutional racism is a national problem. So, fellow Yankees, while we criticize the vestiges of institutional racism in Charlottesville, let us focus on injustice in our own cities, which in my lifetime have been knowingly segregated and ultimately dehumanized by the same powerful, business-friendly social forces north and south, today epitomized by a New York real estate mogul named Donald Trump.