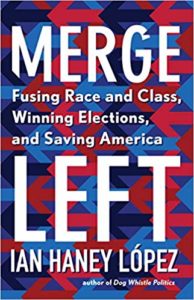 The main purpose of this book is to guide the messaging of Democrats as they run for office. In spite of this it has useful insights about popular consciousness and how to move people against racism.

There are a few key takeaways: around 60% of the white population has mixed consciousness on the race question. They don’t want to see themselves as racist and yet have an often-high degree of racial anxiety. They can be won to an anti-racist position with the proper approach. Approaches that don’t work so well are a straight-out racial justice pitch and color-blind pitches. If racism, what the author calls “dog whistle” politics is not confronted in some way, whites influenced by racism will still see universal programs as mostly benefiting the racial “other” and reject them. But straight-out appeals to morality without including self-interest don’t work as well either. The narrative that works well is to clearly show that attacks on oppressed people are part of the general attack on the working class and poor. This incorporates self-interest into the calculus. Paradoxically, this “race/class” appeal also works better on people of color than a straight-out racial justice appeal. Why? Because people of color often don’t trust that white people will be anti-racist if their self-interest is not involved.

The author notes that the race/class narrative is much more than just combining opposition to racism and opposition to poverty and exploitation. It stresses that austerity, low wages, and underfunded social programs come from politicians who use racism to divide people. It explains that opposing the divisiveness of racism is central to winning better conditions for all workers. It ties the material interests of whites directly to opposition to racism. Without this tie there would be far less opposition to racism among whites.

Some see this as a pessimistic view. They want to think that morality alone should be enough to win whites to an anti-racist position. The author counters this by making clear that all morality flows out of perceptions of self-interest. In other words, moral opposition cannot be neatly separated from ideas about material interest. Because the vast majority of people would materially benefit from opposition to racism, the author’s view on this point is actually optimistic. A majority can be won to anti-racism on the basis of solid material interest. Workers can realize what their real material interests are especially in common struggle.

López says that about 20% of whites readily respond to dog whistle politics and are unlikely to be won over by a race/class appeal. Another 25% are also open to direct racial justice appeals as well as color blind appeals but can be influenced by a race/class narrative.  These results come from extensive focus group testing, so have more of a scientific basis than wishful conjecture. These results are important in several ways.  They ward off excessive pessimism. If nearly 80% plus of the white population is open to persuasion on racial issues, there is grounds for hope.  They also show that combining the fight against racism and the fight against exploitation is a winning strategy.  This can strengthen the fight against poverty and exploitation as well as the fight against racism.

The author’s optimism extends further. Even Donald Trump voters are not uniformly open racists. López stresses that Trump’s appeals on race are still a dog whistle. By this he means that even Trump says he is not a racist and doesn’t use the same terminology as pre-Civil Rights Southern racists. It is important that he maintain plausible deniability. In this way, he can appeal to underlying racial anxiety and still assure his followers that they are not racists, but only patriots. The fact that even Trump, who makes covert appeals to racism, feels the need to use dog whistle politics is a sign that totally open racism is still unacceptable to the vast majority. For Trump, dog whistle politics is a way to consolidate his base by provoking liberal attacks and defending his followers from the charge of racism.

Though the race/class narrative that the author puts forward is a partial confirmation of the strategy that Marxists have pursued since Marx, it has its limitations. Marxists have always stressed that “an injury to one is an injury to all” and that it is in the class interests of all workers to oppose every manifestation of special oppression.  This would include supporting special demands for the oppressed. The author’s race/class approach calls on workers to oppose racism as part of a defense of workers’ rights against ruling class attempts to divide workers. It does not call on whites to support special demands for people of color such as reparations or affirmative action.

Though he doesn’t specify opposition to demands like this, Lopez implies that these would be seen as divisive and undercut support for anti-racism. For example, on page 106 he says of interviewees “Lurking in their remarks was the sense that talking about racism, even racism in the distant past is itself racist and divisive.” On page 107 he says “numerous whites respond when confronted with injustices perceived as only affecting communities of color—’I don’t want to know.’” The fact that Lopez never discusses special demands for the oppressed is a sign that he doesn’t see them as an important part of anti-racist strategy.

There are a couple of problems with this. In fact, straight out “racial justice” narratives, not just race/class frames, have reduced support for racism. The Black Lives Matter movement improved awareness and understanding of police racism and violence among whites. This follows the earlier example of the Civil Rights Movement which won more whites to the fight against racism—even though it generally did not frame itself as in the material interests of whites. The same is true for the Black Power movement. People give more respect to those who are fighting for their rights than to those who passively accept oppression.

This means that activists should not shy away from support of direct racial justice initiatives even if they don’t explicitly include the motivation that whites will also benefit from them. Our job, as activists and especially as Marxists, is to show why the victory of these initiatives would be in the material interest of poor and working-class whites. They should support these initiatives for moral reasons but also for reasons of political and economic strategy.

The other problem is that white workers will never fully be on board with the fight against their own ruling class while harboring racial prejudice. As Marx said, “a people that oppresses another cannot itself be free.”  White workers will not be fully won to the fight against racism and thus will not fully shed their racism until they support special demands for people of color.

There is another reason that support for special demands is important. People of color are less likely to unite with whites in the fight against exploitation if they don’t think that the movement will take up opposition to oppression as well. Lopez’s analysis of focus groups counters this argument a bit. He says that people of color like the race/class narrative better than the racial justice narrative. However, for hundreds of years there have been strong movements against oppression based on race, gender, sexual orientation, etc.  Even if the majority of people of color would accept a color-blind or nearly color-blind movement, many of the staunchest radical fighters among people of color will not be as enthusiastic without the movement focusing on fighting specific types of oppression. To create unity with them, issues of oppression must be prioritized.

The weaknesses of the author’s position are based on its goal. It is a how-to manual for Democratic Party politicians. It is aimed at “Winning Elections and Saving America.”  As such, it develops messages which can win at least a majority in elections assuming current consciousness. It is not primarily aimed at changing the overall attitudes of people but of using jujitsu on the attitudes they already have.

This electoral orientation is based on faulty assumptions. The author assumes that though Democrats have made mistakes, the fight against racism is mainly a fight against Republicans. This is unfortunately quite naïve. Institutional racism in the U.S. has been constructed at the political level by both parties. It still depends on both parties.  For the Republicans it is “dog-whistle” racism. For the Democrats it is “color-blind” racism. Neither party has taken seriously championed measures to undercut the fundamental structures of racism, unless forced by mass movements. Instead, they have continued to reinforce it. Defeating the Republicans only defeats one aspect of racism.

The responsibility of the Democratic Party for reinforcing racism is unfortunately downplayed by too many activists. The Democrats were of course the main party of slavery and Jim Crow. However, their perpetuation of racism is much more recent and continuing. Bill Clinton was instrumental in ramping up mass incarceration in the 1990s. This disproportionately swept up people of color. Obama deported more people than any previous president, earning him the title of “Deporter in Chief.” The primary target of Black Lives Matter demonstrations, especially in the larger cities, were Democratic urban administrations and Democratic Party run police forces. The extreme concentrations of wealth which have hit people of color the hardest has in part resulted from neoliberal policies pursued by both parties.

Related to this orientation on elections and focus groups is a misunderstanding of how ideas change. Ideas do not primarily change by proper framing and better campaign slogans, no matter how clever. Ideas change in struggle—by seeing the struggles of others and even more importantly by engaging in struggles directly. Further, voters don’t just respond to campaign rhetoric. They look at the actual practice of politicians and their parties. Race/class campaigning by Democrats is unlikely to be effective absent real substantial actions by these parties that reflect that campaigning. This is what happened to Hillary Clinton in 2016. Voters rejected the economic disaster of neoliberalism that the Democrats had overseen rather than taking Clinton’s rhetoric seriously.

The data presented on public reactions to various messages is very interesting and useful as is the author’s optimistic attitude about the possibility of fighting racism. However, in terms of strategy for political activists as opposed to politicians his most important point is on page 205:

Racial justice advocates have a strong interest in continuing to push to push into the national conversation seemingly radical ideas like disarming the police, abolishing ICE, massive investment in communities of color. A huge redistribution of land to Native Americans and Native Hawaiians and so on. These ideas help redefine the national imagination regarding what’s possible and legitimate, shifting that window leftward.

For those who aim at building a strong movement against racism, Merge Left will give useful ammunition. Using that ammunition does not require adopting the author’s attitude of focusing on electing Democrats as a solution to racism.