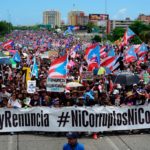 Governor Wanda Vázquez was the first governor in the United States to order businesses to close and to tell people to stay home, which helped to contain the virus. At present there are only 9,336 coronavirus cases and only 167 deaths out of a population of 3.2 million. But the economic shutdown has devastated the island. With a civilian workforce of 1.05 million, 300,000 have filed for unemployment compensation and the official unemployment rate is 23 percent.

Only last year Puerto Ricans rose and drove from office governor Ricardo Rosselló after it was learned that an Telegram app chat he had used misogynistic and homophobic language, joked about people who died in Hurricane María, and appeared to threaten the life of the mayor of San Juan, Carmen Yulín Cruz. Demonstrations grew in numbers from tens of thousands to one million, forcing Rosselló to resign in August of 2019.

While the trigger of the uprising was Rosselló’s text message, there were other issues as well. Puerto Rico had an incredible $72 billion debt. The island had an unemployment rate then of 14.2 percent and a poverty rate of 45 percent. The U.S. government established a Financial Oversight and Management Board of Puerto Rico (FMOB) to run the economy. The financial problems resulted both from economic mismanagement and natural disasters.

Hurricane María with winds of 100 miles per hour, struck the island in September of 2017, leaving 3,057 dead and doing $90 billion in property damage. Many homes lost their roofs, leaving thousands living under tarps for a year or more; and some went without electric power, food, or water. U.S. President Donald J. Trump told advisors that, “he did not want a single dollar going to Puerto Rico, because he thought the island was misusing the money and taking advantage of the government.” The Federal Emergency Management Agency failed to provide adequate assistance. Trump callously threw rolls of paper towels to Puerto Ricans storm survivors at a public event, infuriating many Puerto Ricans. Just a couple of days ago we learned that as the storm approached, Trump speculated to aides about selling the island.

Disasters continue to strike the island. In late December 2019 and early January 2020 a series of earthquakes hit the island, the largest a 6.4 magnitude quake that badly damaged the city of Ponce. And now 60% of Puerto Rico suffers from drought and some areas do not have a daily water supply.

The FMOB allotted $13 billion for COVID-19 issues, and Governor Vazquez has announced a $787 stimulus package, with $350 for businesses to help pay workers. Many Puerto Ricans, however, labor in the informal economy and will not be entitled to unemployment insurance.

We know from the people’s history that Puerto Ricans will continue to fight on the island and in the United States. Most Puerto Ricans can be expected to vote for Joe Biden in the national election.