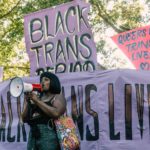 Throughout June hundreds of thousands of Americans in hundreds of cities and towns protested the killing of George Floyd who had been murdered by police in Minneapolis. But there were also LGBTQ Pride Marches in support of the protests against racism. There were large Black Pride marches in New York and Los Angeles and in other cities, some for Black trans people who are often victims of police violence. Many in the LBGTQ movement pointed out the common origins of both civil rights movements—of Black and LGBTQ people—in resistance to discrimination and police violence.

The rainbow banners flew this year in the midst of signs saying “defund the police.” The Pride marches began in June of 1970, but over the years as the LGBTQ movement became more successful, corporations began to sponsor the marches, which often cooperated with the police. This year, with the Reclaim Pride movement, LGBTQ spokespeople talked of breaking with corporate sponsorship going back to the roots of the movement that began with the fight at the Stonewall bar against police harassment.

While the protests over racial injustice have largely subsided, many activists turned their attention to taking down statues of generals and politicians of the Confederacy, the government of the states that seceded to support slavery during the American Civil War. Many statues have been either taken down by state and local government or torn down by protestors. In response, Trump signed an executive order to protect monuments emphasizing that those who do tear them down could face ten years in prison.

All of this took place in the midst of the continuing pandemic and economic crisis. The United States has suffered 125,000 COVID-19 deaths and tens of millions remain unemployed. After three months of a national lockdown from March to May, President Donald Trump and Republican governors in several Sunbelt states—arguing that the pandemic was all but over—had rushed to reopen the economy, leading to a resurgence of the virus and forcing Texas and Florida and many counties in California to close down again, while eight other states paused their re-openings.

In the meantime, Trump has asked the Supreme Court to strike down the Affordable Care Act (ACA), popularly known as Obamacare, which would leave 23 million Americans without health insurance. Because most Americans get their health insurance through their employers, the economic crisis has already stripped millions of their health coverage and 450,000 have sought insurance through the ACA since the crisis began. While health insurance under Obamacare remains in the hands of private enterprise and for profit, Trump and the Republicans argue that it is a first step to government control and socialism.

The Cares Act signed on March 27, which provided the jobless with an additional $600 per week in unemployment benefits will end on July 26, though tens of millions remain unemployed and the U.S. economy is predicted by the International Monetary Fund to shrink by 8 percent. This would leave most of the unemployed with an average of only $378 per week, not enough to support most workers. The Republicans have opposed an extension of the unemployment supplement on the ground that it will encourage workers to stay home rather than going back to work. Many workers fear going back to work, as long as the pandemic persists.

With the pandemic and the economic depression continuing, and the movement against racism having shifted American opinion on that issue to the left, Donald Trump’s support has dramatically eroded. In six key contested states—Michigan, Wisconsin, Pennsylvania, Florida, Arizona, and North Carolina—Biden now leads by between 7 and 11 percentage points. Trump’s support has eroded among older voters, among voters without a college education, and in some states among white voters. He looks likely to lose, but it is five months until the election.