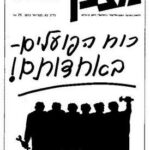 The issues raised by brian bean (‘No common struggle with settler colonialism’ NP, May 4) are not new. The debate around them has been going on for years. I have been involved in it and have spilled gigabytes of electronic ink in polemics around it.

Instead of tediously repeating myself in responding to comrade bean,  let me summarize my position, and provide some links to articles in which I have set it out in detail, and which readers are invited to consult.

Let me start by agreeing with comrade bean regarding the present characterization of the Hebrew (‘Israeli-Jewish’) working class: its politics on Zionist colonization are largely reactionary, as it is complicit in it and has no immediate interest in combating it.

Therefore talk of mass ‘joint struggle’ against the Zionist regime in the present circumstances is facile. Of course, this by no means excludes the possibility of winning over small numbers of Hebrew workers to a revolutionary socialist, hence anti-Zionist, position. Our experience in Matzpen is proof of this.

Having said this, let me also point out that there are lots of cases of joint struggle and solidarity of Israeli workers of both national groups on direct class issues, in strikes etc. There is, for example, a relatively new but very active, successful and growing trade union organisation, Workers’ Power  which is explicitly internationalist. This is something positive to build on.

I am sure comrade bean and I agree that a necessary condition for a benign resolution of the Israeli–Palestinian conflict, between colonisers and colonised, is the overthrow of the Zionist regime. Can this be achieved without the support – let alone against a determined opposition – of the Hebrew working class?

In my article ‘Belling the cat’ I argue that the answer to this question is No! Indeed, the idea that a benign resolution of the Israeli–Palestinian colonial conflict can be imposed by force on the Hebrew working class and generally on the Hebrew masses is an extremely dangerous illusion, and socialists should not condone, let alone advocate it.

But is the Hebrew working class going to support the Zionist regime forever? Are there any circumstances in which it may take a class position against this regime?

In that article I argue that there is a scenario in which the Hebrew working class would turn against the Zionist regime. I elaborate this further in ’The decolonisation of Palestine’ (see in particular the final part of this article). I also point out manifestations of Hebrew solidarity with the Egyptian and Syrian workers.

The question of Hebrew self-determination should be viewed in this context, as I explain in ‘Class struggle or national war?’

One essential point that emerges from all this is that it is a mistake to think of this conflict and its possible resolution in a rigid static way, and within the ‘box’ of Israel/Palestine. It is essential to think of it dialectically and within a regional context.

It also requires long-term strategizing and organizational preparation. We must on no account give up in advance on the prospect of joint struggle.