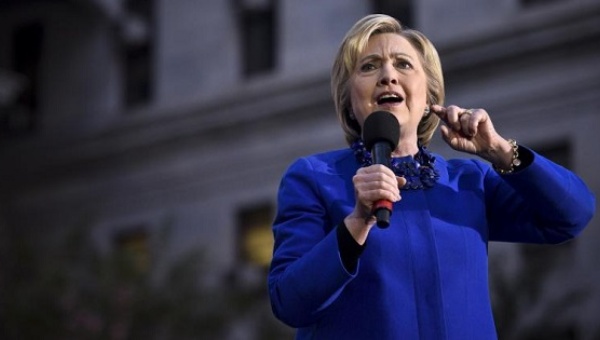 That gem, squirreled away in the Wikileaks dump of emails from Podesta, who now is Hillary Clinton’s campaign chairman, shows how capitalists play the long game with Democratic administrations.

Many liberals and those on the left are still bickering about whether to vote for Clinton, Jill Stein, or sit out the race. But it’s all moot, even with weeks to go in the 2016 election. By every measure, Donald Trump is in a cataclysmic meltdown.

Each day brings new signs of his sinking candidacy. Clinton averages an early 9-point lead among “high-quality polls,” and no candidate has ever overcome such a deficit this late in the race. Some veteran political analysts say Clinton has locked up 352 electoral votes, far more than she needs to win, and her cautious campaign is confident enough to extend the battle to red states like Arizona, Indiana, Missouri, and Utah in hopes of a landslide that could possibly flip Congress to the Democrats.

The time is ripe to envision a truly progressive policy agenda and plan how to organize for it under a potential Clinton administration. Here, leading national activists and thought-leaders have weighed in on Hillary Clinton’s proposals and the battles that lie ahead for progressives.

After Bernie Sander’s powerful insurgent candidacy, the buzz this summer was that Clinton was running on the “most progressive Democratic platform ever.” Sounding like Sanders, Clinton says she “will make debt-free college available to everyone and take on student loan debt.”

That is precisely the problem, says Ann Larson: “It sounds good.” Larson is co-director of the Debt Collective, which organizes for debt cancellation and free quality education. “When you get into the details, there’s not much to celebrate.” Sanders proposed “tuition-free” higher education, while Clinton’s term is “debt-free.” Larson says that’s misleading. “Clinton is proposing income-based repayment,” she says. “So graduates have a portion of their income deducted. It’s not tuition-free. It’s going straight to garnishment.” Larson claims this fits into Clinton’s neoliberal perspective on education. “They view education as something individuals invest in to improve their competitiveness against peers in the job market.”

While Clinton does not make repayment from wages mandatory, her plan encourages payroll deductions as the primary means for borrowers to repay student loans. To the degree that former students opt in to Clinton’s payroll deduction program, movements like Debt Collective would lose leverage. Larson says, “The current system allows us to collectivize our struggle through debt strikes, and that option is taken off the table” when payments comes out of debtors’ paychecks automatically.

But there are bright spots and opportunities. Clinton’s plan would make community colleges tuition-free, for example. Larson cautions that this plan could reinforce “a tracked system where working-class folks go to low-status campuses that are resource-poor.”

The Debt Collective is seeking transformative change. “The student debt movement is galvanizing around two demands, free quality four-year college for everyone, and real student debt relief, broad cancellation. We need to rectify four decades of failed policy, and we are not going to do it with band-aids or by doubling down on neoliberal policy as Clinton proposes.”

Erika Andiola served as national Latino outreach press secretary for Bernie Sanders’ campaign and now conducts political outreach at Our Revolution—a progressive group set up by Sanders to continue the campaign’s work. Andiola, who is undocumented herself, rocketed tonational prominence when immigration officials were in the process of deporting her mother and brother after nabbing them in Arizona, and Andiola’s tearful plea led to their safe return.

She credits immigrant-rights activists for pushing Clinton to pledge to close private detention centers and “end family detention for parents and children who arrive at our border in desperate situations.” Previously, Clinton had accepted hundreds of thousands of dollars in contributions from private prison interests and lobbyists and advocated for deporting child refugees fleeing violence in Central America.

Once in office, Clinton says her priority is a bill for “comprehensive immigration reform with a pathway to full and equal citizenship” within her first 100 days in office.

This is where policy and strategy part ways, explains Andiola. Comprehensive immigration reform is doomed if Republicans retain control of either house of Congress. So activists want Clinton to push for smaller bills like the DREAM Act, which nearly passed in 2010. It would have granted conditional resident status to undocumented immigrants who arrived as children, then permanent status if they fulfilled conditions such as two years of college or military service. Another piece of legislation supported by many immigrant-rights activists is the AgJOBS bill, originally proposed in 2007, which would offer limited amnesty to farmworkers and has bipartisan support. Andiola says Clinton could also exercise her executive and administrative powers to stop enforcing deportation programs that rely on local police and encourage racial profiling, such as the Priority Enforcement Program and the Criminal Alien Program.

She adds Clinton should appoint officials who know immigration law and think creatively about it. Activists fault the Obama White House for waiting until 2012 to issue an executive order that made 1.5 million undocumented immigrants eligible for protection if they arrived in the United States as children.

Margaret Flowers has been fighting for single-payer health care for more than a decade as a pediatrician, adviser to Physicians for a National Health Program, and now as a Green Party candidate for the U.S. Senate. Scouring Clinton’s plan for “universal, quality, affordable health care,” Flowers spots modest improvements, such lowering prescription drug prices and doubling funding for community health centers.

But at best, she says, Clinton’s proposals are “tweaks to a fundamentally flawed system.”

“There is no way to make the current system universal or affordable,” she says. “Clinton will continue the private insurance system, which adds more bureaucracy and cost. The insurance companies aren’t going to reduce their costs because that’s their profits.”

Many progressives are excited Clinton has put a “public option” back on the table, but Flowers is not so sanguine. She calls it “the profiteers option.” Flowers says numerous states have implemented public insurance systems, but each one has failed. She explains, “Insurance companies cherry-pick the healthy, the sick end up in the public program,” which is then subjected to financial stress from spiraling costs. One study found that in the eight states that have implemented a public option since 1988, the number of uninsured increased or stayed flat because the programs lacked “effective cost-control measures.”

“The only thing that will turn this system around is to expand traditional Medicare,” Flowers says. “Everyone is in it. All the health care providers are in it. Everyone pays through a progressive tax. Then we can get the cost savings that we need to provide high-quality universal care.”

Only popular power can push Hillary to take this position, she says. “People need to stand up and say this is no longer tolerable, like the climate crisis.”

When it comes to global warming, climate justice activists will say we dodged a planet-heating bullet in Donald Trump. But Ananda Lee Tan works with EDGE Funders Alliance to support movements and communities battling the fossil-fuel industry, and he points out that Hillary Clinton “is beholden to the biggest and most-powerful polluting and carbon-intensive industries.”

To be fair, Clinton supports some policies opposed by the dirty energy industry. She pledges to meet U.S. commitments made at the 2015 Paris climate conference by reducing “greenhouse gas emissions by up to 30 percent in 2025 relative to 2005 levels.” Since most Republicans are dead set against taking action on climate change, Clinton aims to bypass lawmakers through executive actions.

But that goal is less impressive than it sounds, says Tan, because emissions are already trending downward. In the power sector, which accounts for nearly a third of U.S. emissions, the industry is phasing out many coal-fired power plants and turning to natural gas instead. The EPA estimates that cars, trucks, and SUVs will average more than 50 miles per gallon by 2025, a substantial increase over today’s levels. And the U.S. Energy Information Administration forecasts that production from the most sustainable types of renewables will more than double over the next decade. That means the United States can meet most of the promised reductions without making deep changes to the current system.

What’s more, the 30 percent target doesn’t go far enough. Tan says we’d fall far short of what’s needed to keep temperatures below catastrophic levels even if every nation in the world adopted such a plan.

Nonetheless, Tan sees potential after the election. For him, the top agenda items include distributed generation—creating electricity at the point of consumption instead of at big power plants. A related goal is energy democracy—making sure residents who use energy have a say in how it’s generated and distributed. A third is a “just transition,” a complex idea that includes ensuring good jobs for workers and communities who currently depend on the dirty-energy industry.

Tan says the “real bright spots” are the movements, which have increasingly been taking leadership from the communities most affected by climate change. “We need to build the scale of power that allows us to take on the Koch brothers and the big energy companies destroying the planet.”

Arun Gupta wrote this article for YES! Magazine. Arun is an investigative reporter who contributes to YES! Magazine, The Nation, Telesur, The Progressive, Raw Story, and The Washington Post. He is a graduate of the French Culinary Institute in New York City and author of the upcoming Bacon as a Weapon of Mass Destruction: A Junk-Food-Loving Chef’s Inquiry into Taste (The New Press). Follow him on Twitter @arunindy.