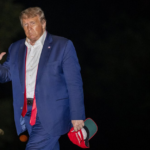 The surreal presidency of Donald Trump was filled with confusion, contradictions, anxiety, and missed opportunities. His rhetoric inflamed political tensions in every facet of American life, from football to COVID-19. Corporate media split along party lines as never before and accentuated all the ugliest aspects of American society. It seemed like anything was possible, up to and including civil war.

With Trump out of office and silenced on social media, a false sense of calm has settled in over much of the country. But the issues that gave rise to Trump still exist, and so far, they aren’t being adequately addressed by the Biden administration. Meanwhile, the Trump wing continues its domination of the Republican Party. The country is still deep in the woods.

There are a lot of lessons to be learned from this remarkable era. It pulled back the already badly eroded veneer of respectability that had long covered up the darkness at the core of American politics. We witnessed the depths that our politicians, businessmen, media, and fellow citizens could sink to. But we also saw a nation desperate for change. The left should be more confident than ever that they have the answers the country needs.

Republicans will go as far as they can get away with

As outrageous as Trump the spectacle was, his policies were fairly typical of most far-right Republicans. He slashed taxes for the wealthy and tore up government regulations on climate change, pollution, and labor. He passed enormous military budgets, expanded our overseas wars, continued domestic surveillance, and further militarized the police. Because Trump delivered on these issues and had such a close connection to the right-wing base, most Republicans shrugged off his more outlandish behavior.

When Trump incited a violent mob and turned it loose on the United States Capitol in an attempt to overturn the 2020 election, it seemed to be a turning point. Most of the public opposed the revolution Trump seemingly tried to foment. Donors threatened to abandon the party. But it didn’t take long for Trump and the Republican establishment to repair their relationship. The party quickly acquitted Trump of impeachment charges and he recently headlined their biggest annual event.

Democracy, the Constitution, basic norms, and human rights are simply irrelevant to the GOP. Enriching big business is their only serious objective. If overturning an election is the best way to do it, they may try. Trump never attempted to seize dictatorial control as some feared, but it’s not clear what mechanisms would have stopped him if he had. Far-right propagandists and politicians defended Trump’s every move, including through the January 6 riots. Trump led Republicans into uncharted terrain. Given the opportunity, they could very well go even further.

People despise the ruling class of this country

After Trump won in 2016, analysts struggled to understand his political success. Much of the analysis ultimately blamed the people Hillary Clinton termed the “deplorables” – antisocial elements of the GOP base, including racists, chauvinists, religious extremists, gun nuts, and conspiracy theorists. But these people do not account for all 74 million of the votes Trump got in 2020. Another, perhaps much more significant, driver of Trump’s political success was his anti-establishment rhetoric.

For generations, the American people have been sold out by business leaders, both political parties, and a mainstream media that caters to an elite viewpoint. Trump called this out, and made a tempting offer. He promised Americans he’d smash the ruling-class grip over the country’s politics and restore the long-since sold-out American dream. No other major party presidential nominee made that pitch to voters, and for a country grown desperate by decreasing wages, increasing hours, worse benefits, and crumbling infrastructure, Trump seemed like a risk worth taking.

The left must not simply credit all of Trump’s success to racism. Trump’s message, filled with lies though it was, attracted former Obama voters in states like Pennsylvania, Wisconsin, and Michigan. Joe Biden’s victory seemed only to have reassured Democrats that people want the status quo. But the status quo is rigged against American workers, and more of it could inspire another Trumpian backlash.

Democrats need more than anti-Trumpism to run on

Both in 2016 and 2020, the central message of the Democratic presidential candidate was, “Donald Trump is a terrible person, and I am not him.” In 2020, after five years of non-stop Trump on TV and with coronavirus ravaging the nation, that message was enough – but just barely. Joe Biden won the popular vote handily, but he came within narrow margins in key battleground states. Even with all his issues, Trump won the second-most votes of any candidate in history.

Trump is every bit as terrible as his worst critics say, and often worse. Democrats are right to stand against the racism, xenophobia, and transphobia that makes up so much of the modern Republican platform. The outlandish terribleness of Trump and the modern Republican Party has allowed the Democrats to essentially hold the left hostage. With the threat of Trump and fascism ever on the horizon, Democrats have presented themselves as the only moral choice. But that isn’t enough on its own.

The Biden Administration has taken several promising steps. Biden signed a $1.9 trillion COVID relief package that paid most Americans $1,400, extended unemployment benefits, and ramped up the nation’s testing and vaccination programs. More recently, Biden unveiled a $2 trillion infrastructure program that calls for improvements to the nation’s roads and water systems, nationwide access to high-speed broadband internet, investments in housing and manufacturing, and more help for elderly Americans and their caretakers. The plan emphasizes green energy and is largely paid for by increasing taxes on corporations.

On the other hand, Biden reduced the amount of his COVID stimulus checks and backed off, at least for now, on raising the minimum wage. He seems torn on whether to forgive $50,000 in student debt for millions of borrowers and opposes full legalization of marijuana. Biden’s loftiest ambitions are in big plans that award expensive government contracts. Many of these plans are good, but when it comes to direct relief through things like debt forgiveness, universal health coverage, or stimulus payments, Biden is still much more conservative.

Biden knows he must deliver something tangible to the American people. Over the last several generations, Democrats have largely abandoned the working class, and are now funded by many of the same corporate donors as the Republicans. There have been some positive developments in Biden’s few months in office, but there have also been worrisome ones, such as his defense budget increase. If Biden and the Democrats don’t deliver material improvements to people’s lives while they’re in power, another MAGA win is likely.

Populist leftism is the best way to defeat Trumpism

Trump voters often talk about wanting to throw a bomb in the system. People know they are getting screwed. An amoral conman like Trump can tap into that anger for his own benefit and burn the country down around him. But that underlying anger is justified, and in the right hands it can also be harnessed into a serious, productive political movement.

Bernie Sanders combined anti-establishment rage with honest, class-conscious politics. Sanders is often dismissed by corporate media and establishment Democrats as too radical to be elected. But his platform is widely popular. A majority of Americans – including, in some polls, a majority of Republicans – support the central pillars of Sanders’s platform: student debt forgiveness, Medicare for All, and raising the minimum wage. In both 2016 and 2020, Sanders was the only candidate on the left to generate the kind of stadium-filling enthusiasm that Trump did on the right.

The Democratic Party is stuck in a tug-of-war between Sanders-inspired leftists and older, wealthier, more conservative party elites. The establishment doesn’t agree with Sanders on the issues, and they don’t like his manners. Corporate media often compares Sanders, unfairly, to Trump. The two couldn’t be less alike in character or policy, but they do share one commonality: they aren’t afraid to offend their party’s establishment.

Some of Trump’s more vulgar tendencies, which so offended establishment Republicans, were exactly what endeared him to voters. Trump called politicians crooks and told people he had the answers. Liberals scoffed at Trump’s voters, called them rubes, and wrote them off. Progressives should know better. Voters in conservative Florida gave Trump their votes for reelection, but also voted to raise the state’s minimum wage. Respondents to a 2020 FOX News exit poll overwhelmingly favored a public health option. If progressives can speak honestly about our political situation and persuade people that progressive policies will help, they can get votes.

This means going beyond the big infrastructure and relief plans of the Biden administration. While these have many good ideas inherent in them, the largest beneficiaries will likely be the corporations who are awarded the contracts. If better roads are being used to get to jobs that pay poverty wages, workers will still be hurting. The American people need a guaranteed standard of living that includes healthcare, education, and a livable wage. We have the means to secure a healthier, happier, more just nation. We only need the political will.

At this point, the genie is out of the bottle. America’s corrupt political establishment has been exposed beyond any reasonable person’s shadow of a doubt. The days of status quo politics are numbered. Aggressive, honest, class-oriented politics are the way forward. Even after five bitter, painful years of Trump, our divisions are more superficial than we realize. We must learn from this national reckoning and build a political movement that inspires voters, speaks to them honestly, and fights to improve their lives. If we don’t, the next Trump could capitalize on people’s desperation and con the nation into full-blown fascism.