Planet of the Capitalists 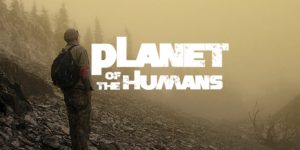 Planet of the Humans, the new documentary from Michael Moore and Jeff Gibbs, seeks to expose the false promises of renewable energy.  It also warns against the bad leadership on climate issues from liberal environmental groups like the Sierra Club and Bill McKibben at 350.org.

As many readers will know, the film faces a firestorm of condemnation from the broad left, a favorable review on Breitbart for exposing the “hypocrisy” of the environmental left, and a handful of favorable reviews from radicals. It also has over 7.5 million views and climbing on YouTube as of this writing.

Critics correctly say that Planet of the Humans makes outdated and inaccurate assertions about renewable energy, which underplay its capacity to replace fossil fuels. It uses gotcha-style journalism toward critics of the fossil-fuel industry such as McKibben, which is puzzling given Moore’s claim of wanting to engage in serious debate about the way forward in confronting the climate emergency.

The film projects a drama of collusion of liberal climate groups and Wall Street. There is truth around collaboration of environmental groups and big business, but it’s also not breaking news. At the same time, the documentary’s popularity likely reflects another conclusion of the film: temperatures continue to rise and decades of climate organizing hasn’t lowered emissions. It is worth stepping back, and seeing what can be salvaged.

Here is what Moore says about the film and controversy:

“Wall Street requires that every business grow from year-to-year. If a business does really good this year, it’s not good enough that they do the same thing next year. They have to do more. Which means we have to consume more, buy more. We have to make bigger profits…. ‘Enough’ is the dirtiest word in capitalism because there is not supposed to be any such thing as enough. Because we are told we need more, and companies are punished by Wall Street if they don’t do more and grow more. Growth is really the death of us…. The failure of the movement has been to address this serious flaw which is we are not going to save the planet or ourselves by allowing Wall Street, hedge funds, corporate American to be anywhere near us as we try to fix…we are in desperate shape.”

If only the documentary followed this line of analysis.

Planet of the Humans instead follows a sensationalist path toward the needed debate over climate and capitalism. Worse, it takes an utterly wrong and dangerous position on population. George Monbiot writes in The Guardian that the film only offers one concrete solution in an interview: “We really have got to start dealing with the issue of population … without seeing some sort of major die-off in population, there’s no turning back.”

But what about the wealthiest fraction of the planet that is responsible for the vast majority of the damage? There is no way to assess, determine, and rationally argue for what population level is desirable or achievable in a perpetually growing economy that structurally cannot recognize any material limits. Capitalism with ten million people would destroy the planet eventually.

For the climate justice struggle and ecosocialists, there are several important takeaways in all of this.

For reducing emissions, several forms of renewable electric power are indeed far better than fossil fuels. At the same time, they also have substantial ecological impacts. Renewable energy like wind and solar do produce net energy—that is, there is more energy produced than the fossils fuels used in producing the turbines and the panels.

The key metric, however, for the climate emergency is life-cycle CO2 emissions. In research presented by Stanford’s Mark Jacobson in the forthcoming 100% Clean, Renewable Energy and Storage for Everything, Jacobson looks at the life-cycle, opportunity cost, and other factors of green house gas emissions of electric power sources. Life cycle would include construction, operation, and decommissioning. The result is a calculation of 100-year total CO2 equivalent emissions. Solar and wind are best, followed by wave and tidal. Hydroelectric and nuclear are mid-range. Climate writers advocating nuclear power should take note of this. The worst are biomass, natural gas, and coal.

The 100-year time frame is crucial for reducing atmospheric carbon levels. What is introduced to the atmosphere has to be more than removed by natural processes. Net CO2 emissions of the entire energy system must be the way we think about things. This means minimizing emissions with the best energy technology available, combined with structural economic transformations that reduce overall consumption and prioritize carbon removal from the atmosphere.

There is other ecological damage from the renewable energy economy. One example is the mining of lithium for batteries and electric vehicles. There are countless other rare metals and materials for solar panels, electrical components, steel production, concrete—and on and on.

The film is more overwhelming than revealing in this area. It is not much of an exaggeration to say that there is no capitalist production process that doesn’t damage the planet. Given the driving core of competitive exploitation of workers to gain profits and accumulate capital, human needs, health, and survival of life itself is not a priority for capitalism, and never will be.

It cannot be the plan to incorporate new technologies into the existing capitalist world. Replacing internal-combustion engines with electric ones, powering the internet with solar panels, fueling skyscrapers with wind turbines, and biofuel air travel, will do little to slow emissions, and won’t matter in the end with endless economic expansion. When consumption of the system is growing exponentially and doubling every 20 years, whether cars, planes, or factory production, the more efficient use of fossil fuels or any other natural resources, doesn’t change the end result.

A serious political look at Bill McKibben’s role in the climate fight would be useful. Planet of the Humans is more of an attempt at character assassination than productive disagreement. The film mischaracterizes about his support for biomass energy (he changed his position to opposing it long ago) and seeks to catch him in embarrassing gotcha moments—like referring to the unremarkable foundation money that funds 350.

As explained and defended in his recent book, Falter: Has the Human Game Begun to Play Itself Out?, McKibben is a green capitalist. He doesn’t hide this. He believes that capitalism is destroying the planet and unable to alter course because of bad ideas, such as the influence of Ayn Rand and the neoliberal ideology held by the U.S. rulers, but he also believes democratic control of the economy (socialism) is not possible. As a result, he thinks the engine of change must be driven by progressive entrepreneurs (solar panel developers) and investors (which is one reason why he prioritizes convincing capital fund managers to divest from fossil fuels and the Stop the Money Pipeline campaign). Such green-capitalist type proposals strike one as utopian, given that they depend on unwilling and hostile agents, capitalists, changing both their own behavior and the functioning of the entire system. Stopping climate warming will not be good for business.

To McKibben’s credit he does promote mobilization, protest and struggle, most notably struggle against the Keystone XL pipeline and Standing Rock in the U.S.  But he sees struggle as secondary, an important pressure strategy, but not itself the lifeblood and potential agent of remaking society and curbing the climate emergency. Politically, this fits with his support for the Democratic Party and attempted partnership with capital.

The ecological and social consequences of renewable energy, how capitalism incorporates these technologies, the horizons of what we believe can be changed, and the social and class struggle required to win are the crucial considerations for an ecosocialist future and a livable planet. Planet of the Humans has no idea how to put these together.

The global climate strikes in 2019 along with the years of climate justice and indigenous fights around extreme extraction, pipelines, and urban climate issues are necessary starting points. As one reviewer has pointed out, many of the participants in 350.org activist groups are to the left of McKibben and green capitalism.

Labor organizations have also joined coalitions with 350.org and other climate NGOs adding a class dimension and continuing to raise the power and necessity of strikes. Without exaggerating the current power of these groups to influence policies and development priorities, we can say that all debate on the way forward for addressing the climate emergency must seek out and engage with the leading edges of this struggle.

Before the current global pandemic and economic crisis, climate justice struggle in the United States coalesced around a combination of Bernie Sanders, proposals for a Green New Deal, a Red Deal, and climate strikes. There is an important political contest for socialists to engage in around defining the political character of the Green New Deal and how to get there.

One contribution from DSA authors is A Planet to Win: Why We Need a Green New Deal, which points to the need for public ownership of utilities and transportation systems, radical changes in work and urban development, placing needs over profits, internationalism, and working class power, especially through strikes. There are questions to debate around reform or revolution, but there is a socialist climate struggle developing and thousands of activists are engaging with the question of goals and strategies.

We can’t just be about calling for people to reduce consumption in society as it currently exists. This is especially the case as capitalism lurches toward or beyond Great Depression levels of unemployment and misery. We do, however, need a radical reduction of energy and resource use as a result of the restructuring of society. There is a limit to how many more capitalist expansion cycles the planet can survive.

The struggle we are engaged with for a Green New Deal can either be a fake deal toward green capitalism, or it can be a steppingstone toward revolutionary transformation. Which way it goes depends on serious and clarifying debates. We have to sort through the challenges and facts of the climate emergency which Planet of the Humans fails to do.

More importantly, the transformation depends on larger social forces, such as the class struggle, strikes, and industrial unionization that extracted liberal reforms from capital and the state in the original New Deal. But the fight this time can’t be aimed at re-booting capitalist expansion and resource extraction. It has to include and expand the indigenous, anti-racist, gender liberation, and anti-capitalist elements present in the international climate protests over the last decade.