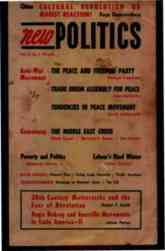 The blurb for Mr. Podhoretz's book describes it as "a confessional case history" and that is just what it is. Making It reads as though it was taped in an analyst's office and the reader's reaction is almost certain to be a cross between morbid interest and sheer embarrassment.

The editor of Commentary, it turns out, writes because when he was a little boy his teachers told him he wrote well. "The desire to write, if real, arises in the first place from the ability to write: a child, for example, may show himself to be unusually articulate on paper and will then be encouraged by teachers or parents to exercise this power." This "articulateness on paper is a gift" which "like a muscle . . . needs to be exercised." The problem that arises, of course, is what is our little writer going to write about. Not to worry. Mr. Podhoretz has the answer. "The urge to write, then, is there long before anything can possibly be there to write about . . . it will continue to be there at a later stage in the absence (really apparent absence) of anything to say (for articulate people always have something to say when inhibition does not get in the way.)"

And in Mr. Podhoretz's case, inhibition, unfortunately, does not get in the way. Wildly casting about for something to say and finding precious little, he has hit on the idea of recounting the story of his own success. Lest one think that he is merely guilty of "self-inflation and therefore of tastelessness," our uninhibited author assures us in his preface that: "There was a time when to talk candidly about sex was similarly regarded as tasteless—a betrayal of what D. H. Lawrence once called "the dirty little secret." He is about to do for success (his own, of course) what D. H. Lawrence did for sex. Such self-inflation is not only tasteless, it is ludicrous.

But then all of Podhoretz's posturing is ludicrous. He wants so desperately to be a part of "the family," that group of intellectuals including such talented figures as Saul Bellow, Meyer Schapiro, Alfred Kazin, the late Delmore Schwartz, to invite them to his parties "without feeling presumptuous" and to be invited to theirs. He is presumptuous. How else describe a man who writes of Edmund Wilson, "Wilson, of course, had always been a skilled, professional journalist…" but about himself, "I had become a New York literary intellectual"?

By what stretch of the imagination can a man minus ideas describe himself as an intellectual? And Podhoretz has no ideas. That is painfully clear. When Irvying Kristol, then editor of Commentary wrote an outrageous article for that journal blaming the liberals for the McCarthy phenomenon, Podhoretz got "caught up…on the side of the hard anti-Communists" because they seemed to have better arguments and "also seemed more thrillingly brilliant and moral." It took him a number of years to discover that these "moral" types were not terribly concerned with the erosion of civil liberties or the practice of blacklisting during the McCarthy era. As for "the major event" in his literary career, his essay "My Negro Problem— and Ours," to say that the essay was socially, politically and morally dense is to be charitable. What Podhoretz dredged out of his psyche on his feelings about Negroes may be of some interest in psychoanalytic circles but it is hard to see why readers of Commentary should have been made to suffer still another dose of not-too-subtle bigotry. Here again, Podhoretz was not writing because he really had anything to say but in this case, because he was angry at James Baldwin for selling The Fire Next Time to The New Yorker when it had been promised to Commentary and "to act again on the lust for fame I had been trying so hard to suppress. . . ."

BY CONTRAST Tynan Right & Left is a sheer delight. Kenneth Tynan, the British drama critic at large has collected pieces he has written during the last ten years on the theater, movies, books, people and places and because he is a cultivated, talented man his brief essays make excellent reading.

The essays on the theater cover performances of Shakespeare, Shaw, Brecht, Ionescu and the contemporary British and American playrights. They are essentially reviews done for The Observer and The New Yorker. Knowledgeable and perceptive, Tynan brings to his work an understanding of drama and the theater and an awareness of the contemporary scene

His discussion of the younger British playwrights like Osborne, Pinter and Wesker is valuable for its insights and appreciation. About Arnold Wesker's Roots, he writes: "Arnold Wesker has sometimes, and misleadingly, been likened to Clifford Odets; misleadingly, because his attitude towards working-class people is far less romantic (and hence less apt to plummet into disillusionment) than that of the young Odets, in whose hands the apathetic countryfolk of Roots would probably have been inspired by a fierce dedication to the cause of agrarian reform." Tynan is right, of course, although one wonders whether Wesker, had he been writing in the thirties, would not have been swept up in the Odets type of agit-prop dramaturgy since there is a distinct trace of it in his plays written so much later. And yet, Wesker's working-class characters, much like Sillitoe's in Saturday Night and Sunday Morning, are flesh and blood and infinitely more complicated human beings than the stock figures created by the "proletarian" writers of the thirties.

They may not succeed, (and in this reviewer's opinion they do not), but Wesker and Osborne are trying to be rational and persuasive. For their contemporary American counterparts, however, reason barely exists. Tynan is well aware of this startling difference between British and American playwrights. Writing about Arthur Miller's After the Fall and James Baldwin's Blues for Mr. Charlie, he says: "Each is the work of a liberal conscience in a headlong flight from reason; and each is blighted by an unstated, perhaps unconscious, assumption that American audiences are reachable only on the level of emotional assault. They can be hypnotised, browbeaten and breastbeaten; but they cannot be persuaded." (I think he is wrong about Baldwin if only because in dealing with racial drama emotional assault may be the only way to reach American audiences.) He is not only right about Miller, but he might also have included Edward Albee and Tennessee Williams, both of whom revel in browbeating the audience.

Aside from criticism, Tynan has included several interesting portraits. Among the best are the ones of Miles Davis, the jazz musician, a comic encounter between Ernest Hemingway and Tennessee Williams and a long interview with Sartre, a bit of which is worth quoting:

Tynan: If Altona [Sartre's play about the guilt of a rich shipbuilding family in Hamburg whose complicity in the horrors of Nazism is universalized] were presented in Moscow, do you think the public would support it?

Sartre: Yes. Because in Moscow the working-class—even perhaps the peasantry—is much further evolved than ours. . . . These people really discuss things in their factories; they make their own choices, and care about the choices they make. They are devoted to educating themselves. Ilya Ehrenburg told me that the soundest criticisms he received came not from the critics but from his readers. That isn't the case here.

Tynan: Some years ago, I saw La Putain Respectueuse in Moscow, very much lengthened and simplified. Were the changes made with your consent?

Sartre: I didn't see the production, but I agreed to an optimistic ending, as in the film version which was made in France. I know too many working-class people who had seen the play and had been disheartened because it ended sadly. And I realised that those who are pushed to the limit, who hang on to life because they must, have need of hope.

Expressed succinctly by Tynan, the moral of Sartre's Altona is "We shall be judged by what we do, not by how we felt while we were doing it." It is a moral which might be appropriately applied to Altona's author.

Along with several travel sketches, some excellent reportage on censorship rounds out this volume. Two such essays, "The Royal Smut Hound" and "Lady Chatterly's Trial" are notable.

Kenneth Tynan, who is Podhoretz's contemporary and who has also "made it," was undoubtedly told when he was a little boy that he wrote well. He is a skilled, professional journalist. Unlike Podhoretz, however, he seems to have no difficulty finding something to say and saying it with intelligence, sensitivity and humor.