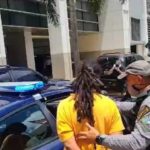 As of May 4, Puerto Rico is reporting 1,806 confirmed coronavirus infections and 97 Covid-19 deaths. Compounding the public health crisis, recent natural disasters (hurricanes and earthquakes) and long-term neoliberal austerity have pushed the island’s people to the brink. But social and labor movement activists have responded with determined struggles, placing the blame for the island’s crises squarely on the shoulders of Puerto Rico’s political elite and their colonial overseers in Washington, D.C., even while the powers that be push austerity and school vouchers.

The following statement was written by Comedores Sociales de Puerto Rico (People’s Kitchens of Puerto Rico) in response to the April 30 arrest of Giovanni Roberto who is one of the group’s leading organizers. Under intense pressure from local activists and the public, authorities released Giovanni. Translated by No Borders News as part of our international coronavirus coverage and in solidarity with the people of Puerto Rico.

On Thursday, April 30, motivated by the hundreds of stories of hunger and driven by the needs of so many people, Comedores Sociales de Puerto Rico (People’s Kitchens of Puerto Rico) organized a demonstration we called the Caravan for Life. In the middle of the action, our compañero Giovanni Roberto was illegally arrested.

Giovanni, like the rest of us who work with Comedores Sociales, had spent weeks delivering solidarity packages to hundreds of people in the Caguas area of ​​Puerto Rico, where they are experiencing hunger and lack basic necessities.

Forty-five days after the start of a strict curfew imposed in Puerto Rico due to the COVID-19 crisis, basic social aid – unemployment benefits, the Food Assistance Program (PAN), and stimulus checks promised from the government – still has not reached thousands of people who are now starving. All this shows that it is up to us to defend our lives in the midst of this pandemic.

We call on all the people who have been outraged by Giovanni’s arrest to join us today in demanding:

*Testing and Tracking in order to control the pandemic.

*Automatic approval of PAN requests for anyone who has already requested assistance.

*Reopening of all school cafeterias in the 78 municipalities of Puerto Rico for curbside pickup.

*Unemployment benefits for all those families with incomes less than $50,000.

*Establish a 24/7 hotline in the Department of Labor to attend more quickly to people who are applying for unemployment.

*Freezing of prices for food and essential products during the pandemic because our poorest people now have to pay higher prices than ever.

*Grant of $1,200 to all people without waiting for federal approval. Our government has this money on hand in Puerto Rico and could have made the deposits into people’s accounts weeks ago.

*Defend pensions because they are essential. Pensions guarantee economic security of our most vulnerable population and allow them to stay at home to support their relatives.

There is the money in Puerto Rico to fulfill our people’s needs. The government of Puerto Rico has $8 billion in the general fund that it has earmarked to pay the debt. This money must be allocated in its entirety to guarantee people’s health. The government’s priority must be the implementation of the necessary and immediate preventive measures for protection against coronavirus and social security by providing aid to the people.

Poverty and hunger are not new. They are the result of public policies adopted by all previous governments, including decisions promoted by the Fiscal Control Board, and the politicians who today use hunger and poverty to advance their own petty economic and electoral interests. These policies include austerity, privatization, cuts to services, and school closings. These are the public policy decisions that compel us to demonstrate today.

This government, like previous governments, does not listen to people. They only pay attention when people protest, when hundreds or thousands move, when protesters are persistent, and when the people push and push by any and all means until the force the government to respond.

Today more than ever we need a decent government, one that is humane, focused on social needs, and responsive to the economic well-being of the people.

Sign and share this petition to join our demands and build the fight for food security and a good life for all our people.

Originally posted at No Borders News.