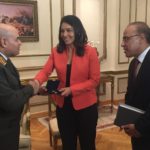 Tulsi Gabbard is getting a pass from people who should know better, first from Glenn Greenwald and then from the folks at Democracy Now! They describe her as “progressive except that some leftists on some issues say…”

Let’s look at the record, starting with foreign policy. Gabbard was first elected to Congress from Hawaii in 2012.  In 2015 she supported Russian bombing of Syrians. “Al-Qaeda attacked us on 9/11 and must be defeated,” she tweeted that October. “Obama won’t bomb them in Syria. Putin did.” She added that it’s “bad enough US has not been bombing al-Qaeda/al-Nursa in Syria” and that “it’s mind-boggling that we protest Russia’s bombing of these terrorists.”  This, of course, as Russia and Assad planes obliterated neighborhoods, schools, hospitals, markets, etc. etc.  Needless to say, Gabbard never criticized a single Russian bombing or any murderous act by Assad.

In the fall of 2016 all sorts of people from politicians to sports stars were properly refusing to meet with Trump.  Gabbard was the lone Democratic to go to him to hustle for a job in his Administration or as she claims to discuss her absurd “Stop Arming Terrorists Act”.  This ludicrous law would prevent the U.S. from arming al-Qaeda, a law without a purpose since Obama wasn’t doing that and in fact had bombed AQ from time to time.

She went to Syria in 2017 and met with Assad escorted by two American supporters of the Lebanese pro-Assad  and anti-Semitic party SSNP.  She came back parroting to her constituents the whole Assad line: that the whole war was a U.S. regime change effort, and there’s no difference in any of the rebels.  To her none of the forces opposing Assad were different from al-Qaeda or ISIS. According to her all were terrorists.

And no surprise she was “skeptical” in April 2017 that Assad forces used poison gases.  In the same article in The Hill she said, ”If President Assad is found to be responsible after an independent investigation for these horrific chemical weapons attack, I’ll be the first one to denounce him.” When the U.N. chemical weapons agency said just that, she denounced no one.

In The Nation in 2018 she gave a blanket description of all Syrians opposing Assad as “terrorists” and she made another claim that the U.S. government was the “big brother and protector of Al Qaeda”.

Her support for Assad and Russia atrocities in Syria seems to come out of a deep-seated dislike of Muslims.  Here’s a piece in January by Amer Ahmed, who writes about Islamophobia on Medium.  It’s entitled “My Personal Encounter with Rep. Tulsi Gabbard’s Islamophobia at Standing Rock.” First take a look at the picture. It shows Tulsi Gabbard joyously meeting with Narendra Modi, the prime minister of India. This is not faked enthusiasm. If anything inspires Gabbard, it is Indian “white nationalism,” Hindutva, and its leader Modi.  Arundhati Roy describes Modi as a “fascist.” His government has arrested thousands of activists. As Chief Minister of Gujarat in 2002 he whipped up hatred of Muslims after Hindus were killed on a train. Shortly after his campaign there was a massacre of Muslims in his state with between one and two thousand souls extinguished!  Hindutva sees its enemies as Muslims (and lower caste Hindus who don’t know their place).

In Ahmed’s article he describes Gabbard and her spouse “recoiling” from him upon hearing his name and avoiding other attempts when he tried to talk to her or even catch her eye. They were in a home in Cannonball, MN at a celebration party after Obama announced suspension of the Dakota Access pipeline. Ahmed says, “I’m not sure if they perceived me as a spy, a terrorist or something else but they definitely seemed to have a problem with my presence in the room.” I think Ahmed is believable.

On to Israel where Gabbard openly associates with the ultra-right. Here in 2015 she speaks at the wacko (but very influential) Christians United for Israel, the Hagee outfit which supposedly has two million members. Minister John Hagee welcomed world war with Iran as a step to Armageddon. John McCain had to break with him in 2008 on account of Hagee’s remarks saying Hitler had helped fulfill God’s will. In May of 2016 months after she endorsed Bernie Sanders, she attended the Champions of Jewish Values International Awards Gala in NYC where she was given a Champion of Freedom Award. Other champions included Sheldon Adelson who has said the U.S. should drop an atomic bomb on Iran, and His Royal Highness Crown Prince Reza Pahlavi who was also given an award. (If you’re wondering who this “highness” is, it’s the son of the late outsted Shah of Iran).  In 2108 Gabbard issued her (first?) criticism of Israel when she made a tweet opposing the use of live ammunition against the Gaza marchers.  This act is insignificant compared to her close association with the Ultras.

Look at some photos from her website. Gabbard speaks about her meeting in 2015 with Egypt’s dictator Al-Sisi.  She highlights how he has “cracked down on Islamic extremism.” Yes, “cracked down.”  Just two years earlier Al-Sisi’s men, after having been revved up with wild tales, massacred in one day 800 non-violent Muslim Brotherhood protesters in Rabaa Square. On her site, Gabbard posts a picture of herself merrily shaking hands with Defense Minister Sedki Sobhi. In 2013 Sobhi  was Armed Forces Chief of Staff and sent faxes to commanders warning there were suicide bombers in the midst of the Muslim Brotherhood demonstrators. An article in “The New Arab” says, “One fax even claimed there 20,000 jihadists who had escaped from Gaza preparing to carry out attacks against government targets.” You can imagine the effect.

Gabbard supports some verifiable monsters. This is a “progressive”?

What about domestic policy?  Yes, she says she supports Medicare for All and yes, she showed up at the pipeline protest at Standing Rock.  However, According to Civil Beat, “Gabbard was called out by a Native Hawaiian activist, who criticized her for not being present in her own district, where indigenous groups were fighting over everything from Maui water rights to the construction of the Thirty Meter Telescope on Mauna Kea.” More about the TMT here.

Campagna insisted that the Bank of America fulfill its $150 million commitment to Native Hawaiians, which is now twenty years overdue and totals at least $227.8 million in 2018 dollars. At least one Hawaiian said Gabbard has done nothing on the issue.

Gabbard was challenged in August 2018 in a primary election by native Hawaiian Sherry Alu Campagna.  Gabbard refused to debate her. In fact she hasn’t debated an opponent since 2012.  When the Hawaii Education Association endorsed Campagna instead of Gabbard because of her tyrant connections, Gabbard claimed Campagna wanted the U.S. to invade Egypt, Syria and India. A real smear-artist.