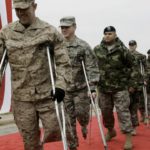 On Veterans Day this year, in a nation now reflexively thankful for military service of all kinds, nearly 500,000 former service members are not included in our official expressions of gratitude.

These forgotten men and women had the misfortune to leave active duty with what’s called “bad paper.” That means they were discharged under conditions “other than honorable,” a determination made without the benefit of consistent standards applying to personnel decisions by all military branches or even individual commanders.

In civilian life, when a coal miner or construction worker gets fired from a hazardous job–for cursing out a supervisor, fighting  with a co-worker, or engaging in other misbehavior–their loss of employment doesn’t render them ineligible to receive state or federal workers compensation for a documented job-related injury or illness (like black lung or asbestosis).

Yet, in each branch of the U.S. military, when you’re drummed out for misconduct in uniform, the punishment is loss of similar benefits—including Veterans Administration (VA) healthcare, disability pay, and access to GI bill programs that make higher education and housing more affordable for those who have served. Among those adversely affected by this disqualification are many men and women who need specialized treatment for traumatic brain injuries or PTSD which they acquired during repeated combat deployments or through military sexual assault. Soldiers who might have performed well before experiencing such physical and mental wounds often misbehave as a result of them—getting into fights, going AWOL, or abusing prescription drugs and alcohol. The result can be an “other than honorable” discharge that denies them later VA care.

Consider, for example, the experience of 36-year old ex-Marine Tyson Manker, now the lead plaintiff in class action litigation handled by the Veterans Legal Service Clinic at Yale. As the New York Times reported last year, this lawsuit alleges that the Navy appeals board which considers “bad paper” cases “currently denies upgrades even to veterans with clear diagnoses of PTSD whose enlistments ended with a single instance of relatively minor misconduct.”

Manker is one of those veterans today, but fifteen years ago, his record was exemplary. He was the top-rated Marine in his platoon, the first promoted to corporal, and then, during the 2003 invasion of Iraq, was put in charge of his own squad. At the end of his combat deployment, Manker was given a one-page questionnaire to screen for post-traumatic stress. As reported by the Times, his completed form disclosed personal exposure “to nearly every type of trauma listed, including seeing dead civilians and Marines, killing enemy fighters and civilians, and experiencing nightmares and hyper vigilance.”

There was no follow up response from the Marines. Yet his commander acted much faster when Manker was caught smoking marijuana back in the U.S., near the end of his enlistment period. His “other than honorable” discharge, pitched him back into civilian life, with none of the social supports that VA coverage and GI bill benefits provide. That’s a fate shared by 125,000 other post-9/11 veterans. Fortunately, Manker had “supportive friends and family who cared about his well-being,” during a period of personal misfortune that included “a random, near fatal stabbing attack.” He was able to get costly private treatment for anger, depression, suicidal thoughts, and substance abused caused by PTSD. With the help of student loans, Manker put himself through college and law school, becoming a licensed attorney and business law professor in Illinois. In 2016, he was national coordinator of Veterans for Bernie and also ran for district attorney in a heavily Republican county in rural Illinois. His platform called for greater use of court diversion programs for veterans guilty of minor crimes. He’s now working on a book about the history of veterans’ benefits, while awaiting a federal judge’s ruling on the government’s motion to dismiss his class action case.

Manker’s campaign for justice for vets with “bad paper” has been embraced by veterans’ organizations like Swords to Plowshares in San Francisco, a major source of private help for former military personnel who are jobless or homeless. A recent Swords report, found that veteran benefit disqualifications, based on bad paper discharges, now affect “6.5% of all who served since 2001, compared to 2.8% of Vietnam Era veterans and 1.7% of World War II era veterans.” “At no point in history,” the report notes, “has a greater share of veterans been denied basic services intended to care and compensate for service-related injuries. One remedy to what Swords calls an “historically unprecedented abandonment of America’s veterans” was proposed to the Obama Administration three years ago by the Yale Law School experts now assisting Manker. They produced a legal memo arguing that “the President has the legal authority to pardon veterans with an other-than-honorable (OTH) discharge whose misconduct stemmed from undiagnosed post-traumatic stress disorder and other mental health issues, including pre-existing conditions.”

Instead, during Obama’s second term, his Secretary of Defense only directed some of the DOD administrative boards that consider discharge upgrade requests to “give more liberal consideration to applications that include evidence of PTSD.”

In response to high veteran suicide rates, Donald Trump’s first Secretary of Veterans Affairs authorized the delivery of emergency mental health services for up to ninety days to veterans with other than honorable discharges.

This measure was expanded by Congress in 2018, but sponsors of that legislation and some veterans’ groups were critical of how 477,000 eligible veterans were notified of their new but limited VA access. Nationwide, less than one percent of veterans with “bad paper” initially benefited from any short-term mental health treatment. Plus, as VA unions complained, the Administration did not seek any additional funding or staff necessary to handle the larger number of new patients who might use the program, if they could find out about it. The narrow clinical parameters of the program left VA therapists with with no way to address service-related physical conditions, like chronic pain, that can trigger depression, suicidal tendencies, or substance abuse among veterans long denied VA care.

The current crop of Democratic presidential primary candidates are being pressed to improve on that Obama/Trump record. During his 2016 campaign for the nomination, Bernie Sanders, former chair of the Senate Veterans Affairs Committee, held a veterans’ event in Gettysburg, PA. where, according to Manker, he expressed support for using presidential pardon powers to cure the injustice of bad paper. This time around, with four veterans in the original field of candidates, several other would-be opponents of Trump have addressed the issue. In a recent interview with Task and Purpose, a military affairs publication, Mayor Pete Buttigieg declared:

“No current or former military member of the military should ever be denied mental health care period.  Veterans who have service-related PTSD and currently have bad paper discharges ought to have their discharges upgraded so they can receive the VA care and benefits that we owe them. Going forward, active duty service members with a service-related behavior health issue should not receive a bad paper discharge.”

At a VoteVets forum, held in New Hampshire in September, California Senator Kamala Harris was less specific. But she did agree that “people with PTSD tend to act out” so their misbehavior in uniform should not disqualify them from getting needed VA treatment later on. In the meantime, the current wielder of presidential pardon power has been rattling that saber on behalf of men in uniform, whose conduct has definitely been less than honorable. Last Spring, Donald Trump pardoned Michael Behenna, an ex-army officer convicted of killing an Iraqi prisoner.

As Mark Bowden reports in The Atlantic this month, the White House also “asked the Justice Department to prepare pardon materials for a number of American servicemen and contractors who were charged with murder and desecration of corpses, including Special Operations Chief Edward Gallagher, a Navy Seal who stood accused by his own team members of fatally stabbing a teenage ISIS prisoner and shooting unarmed civilians.”  Since then, Gallagher was acquitted of murder but convicted of posing for a photo with an ISIS fighter killed during his fifth combat deployment. The top Navy brass, clearly intimidated by Trump’s personal meddling in this controversial case, ended up punishing Gallagher with a brief pay cut and a one grade reduction in rank that will reduce the amount of his pension, when he retires.

Via twitter, Trump congratulated Gallagher on his acquittal, saying: “Glad, I could help.” Unfortunately, those are not words that hundreds of thousands of vets with bad paper will be hearing anytime soon from this president, whose lawyers continue to fight Tyson Manker’s case and others like it.

Suzanne Gordon is the author of Wounds of War: How the VA Delivers Health, Healing, and Hope to the Nation’s Veterans. Steve Early is a longtime labor activist and journalist. They are collaborating on a book about veterans’ affairs and can be reached at Lsupport@aol.com.