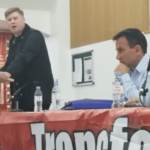 Political movements define themselves by the stories they tell about the world. The story that is presently being told by the global white supremacist far right is one of a conspiracy between global elites and non-white ethnic minorities to undermine white, Christian, family values. Using “political correctness” to silence and intimidate hard-working, salt-of-the-earth white Christian families, sinister elites set about swamping them with immigrants. Generally, the culprits are liberal elites, which in their world means Jewish; and the far right’s imagination is fired by the figure of one Jew in particular: George Soros.

At the “Full Brexit” rally held in London on 26 March, RMT activist Eddie Dempsey spoke from the platform to denounce the betrayal of Leave voters by a left-liberal elite. He said that the key issue was the abandonment of the working class. He said: “too many in the Labour Party have made a calculation that there’s a certain section at the top end of the working class, in alliance with people, they calculate, from ethnic minorities and liberals, that’s enough to get them into power.”

An alliance of the comfortably-off, liberals and ethnic minorities, to deliver power to those “calculating” people who wish to betray the honest working class.

Speaking at your event, standing at your top table, Dempsey said that “whatever you think of people that turn up for those Tommy Robinson demos or any other march like that – the one thing that unites those people, whatever other bigotry is going on, is their hatred of the liberal left and they are right to hate them”.

Comrades, isn’t this scandalous? A speech that sees the working class not as international and multi-ethnic but being pitted against “people from ethnic minorities”, led by liberals. Sympathy for the far right’s hatred of “the liberal left” – a hatred that stems from the liberal left’s role in ‘the great replacement’, the charge that they have chosen foreigners over whites and Britons – and a hatred shared by Thomas Mair, who murdered Labour MP Jo Cox with the cry of “death to traitors”.

Challenged about this online after the meeting by Another Europe is Possible campaigner Michael Chessum, Dempsey responded by throwing in the last piece of the alt-right narrative. He shot back at Chessum that he was a “posh student with pockets full of Soros money”.

It is public knowledge that AEIP has received some funding from Best for Britain, and other sources which get money directly or indirectly from George Soros. But in the context of a worldwide anti-Semitic campaign by the far right from Hungary to the US that sees Soros as the paymaster of “the great replacement”, ranting about political opponents taking “Soros money” is irresponsible at best.

It is possible but unlikely that Dempsey is unaware of the anti-Semitic agitation around Soros. He has apologised for “causing offence” with the Soros line, but he has offered no further explanation for the comment. But regardless of Dempsey’s private motivations, we think that you should act.

You are prominent voices of the left. We think that on the question of Brexit you are profoundly mistaken. But the issue of Brexit is a legitimate and necessary debate for the left. We are writing to you because we think that through tolerating speeches like Dempsey’s, you run the risk of making your “Full Brexit” tour a Trojan horse for far-right influence to seep into the labour movement and gain respectability. We know you to be better than that.

Dempsey is not the only associate of yours smuggling right-wing ideas into the labour movement and the socialist left. Signatories to the “Full Brexit” campaign group include Maurice Glasman, the founder of Blue Labour project. Blue Labour’s slogan is “Family, faith and flag” and he has written against “uncontrolled and uninvited demographic change”.

He is joined by Paul Embery, an advocate for state discrimination against LGBT people, who accuses the modern left of conspiring to “undermine the family” and that “children are generally better-served by being brought up by both biological parents, and that it should be the job of government to use every available lever available to encourage this outcome”.

The coming century will see tremendous upheavals. The horrors of climate change will generate mass migration on an unprecedented scale and social emergencies that will shake our society. In the decades to come, we need a labour movement that responds to crises with the politics of solidarity, compassion, and rationality. We have to fight the far right’s siren call of nativism, denial and retreat into traditionalist fantasies, and that means keeping the left clean of far-right narratives.

The far right and its ideas rely on ambiguity, dog-whistles, and innuendo. Socialism and democracy need plain-talking, truth-telling and clarity. You should offer some clarity now, by making your position on Dempsey’s remarks clear. We urge you to break with him and his co-thinkers. Do not offer the far right a door into the labour movement.

Labour for a Socialist Europe
info@labourforasocialisteurope.org

Originally posted at Labour for a Socialist Europe.