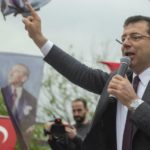 In Istanbul the joy was expressed along the two extremes of the Bosphorus, from the district of Besiktas to Kadiköy, through Sisli, Esenler, Beylikdüzü. Klaxons blowing, songs, flags being waved in cars running the avenues — the city has voted for a change and with hope they celebrated on the night of June 23. All over there were sellers in the street with scarves, flags and badges with winner Ekrem İmamoğlu’s slogan « Everything will be alright! ».

On the other hand, the pro-government journal Yeni Akit has attributed the victory of Imamoglu to foreign press support and the European deputy Kati Piri, who « backs terrorism and rejoices with the results at Istanbul ».  İmamoğlu is being “blasted”: « he didn’t see the 16 million Muslims (at Istanbul), he preferred the 170 000 non-Muslims ! »

Istanbul citizens, 10 million of them, enrolled in the electoral lists, went to vote and defend their choice (again). The ballot was presented for the second time, two months after the first mayoral vote on March 31 was annulled by Turkey’s ruling Justice and Development Party (AKP, Islamic-conservative) due to “irregularities” in the process when the opposition Republican People’s Party (CHP), led by İmamoğlu, defeated its candidate for the first time. Regardless if whether the results are a local celebration or an enormous scandal with a medium or long-term scope, the truth is that Istanbul citizens have raised their voice for a change, just few months after President Recep Tayyip Erdoğan’s reelection.

A Glance to History

Since 1994, the richest city in Turkey has been a political bastion of the AKP, aligned with the ruling party, acknowledging itself as a formidable political ally to the government. The recent electoral result is a symbolic defeat to Erdoğan and his party in his hometown, where he was mayor in the period 1994-1998. “Whoever wins Istanbul wins Turkey” declared the country’s strongman president, assuming this was once again a gamble he would win. The outcome (twice) revealed a disastrous miscalculation.

Rarely has a local election had such national importance, and in this case a wide international tracking. Erdoğan has built his political career over twenty-five years on a “sense of victory, an aura of invincibility and has thrived on seeming unchallengeable.” During his political career he has transformed Turkey and filled its spheres of political power with loyalists who back him in return for favors, a clientelist system of politics. But beyond the figure that he represents nationally, Istanbul’s importance resides in that the city is Turkey’s economic and political powerhouse.

The city’s GDP represents 31,2% of the national GDP, above the capital Ankara, with 9%, and the city of Izmir with 6.2%. Regarding GDP per capita, in 2017, it was $17,723, while Ankara reported $14,253. In demography, it accounts for nearly 20% of the aggregate population in Turkey. As well, due to its location, Istanbul is a geopolitical strategic city at the country’s peninsula, surrounded by the Marmara Sea, Bosphorus Straits and Golden Horn. For this reason, in recent years important infrastructure projects have been developed. The Istanbul New Airport, which is known as the Third Airport, will be able to handle 200 million passengers per year, positioning it as the world’s biggest airport regarding passenger traffic. Another mega-project which will equip the city to be an important trade and geopolitical bastion will be the Kanal Istanbul, which plans to build 10 bridges to connect the Black Sea to the Sea of Marmara and the Mediterranean. The government is hoping to complete it by 2023, as a symbolic work marking the 100th anniversary of the Turkish Republic. Furthermore, the “first 10 companies listed among the top 500 Turkish companies announced by the Istanbul Chamber of Commerce” are based in Istanbul.

But “economics” does not uniquely define the value of the city. For 25 years it was dominated by Erdoğan’s influence, being an important source of support during his political career. Thus, Istanbul’s public administration was completely aligned to official AKP discourse and policies. In government, the president has presented a mixed track record regarding religious minorities, swinging between gestures of benevolence as well as persecution and segregation of the same groups, and sometimes painting them as a threat, such as Kurdish people. In this fashion he developed an strategy of “instrumentalizing” minorities to achieve specific political goals, boosting his international image but also consolidating his power at home by positioning himself as the strongman of Turkish politics. Nevertheless his controversial platform was eventually going to be challenged, and the time finally arrived.

In contrast, İmamoğlu pushed his message in the direction of an “inclusive Turkey and greener, fairer Istanbul, freed of the corruption and nepotism that has built up over a quarter of a century of conservative rule”. With his buoyant style and inclusive politics he was capable to unite in one direction the vote of different sectors of the population, including religious Turks of the Anatolian heartland and metropolitan trade center. In such fashion he managed to present himself as an attractive alternative, providing a sense of hope for change, at least in Istanbul.

After the election results were published, at his outdoor meeting, İmamoğlu said he will also “be the mayor of the national minorities of this city.” He also stated “tear down all prejudices in your mind. We do not care about anybody’s lifestyle or beliefs. We have come to embrace everyone. We have come to embrace everyone, Alawite or Sunni. We do not have a concept of ‘minority’ in this city, we will embrace the Armenians, the Assyrians, the Jews, everyone. We will build democracy in this city.” These statements constitute a new discourse and a challenge to Erdoğan’s government as the persecution of minorities has been a “sensible” affair in domestic and international politics.

Ekrem İmamoğlu rose up to question and defeat a regime that had the control of the richest city in Turkey for 25 years; moreover, he beat Erdoğan’s stronghold. Probably, in an alternative reality, if the AKP hadn’t canceled the first election, it would have been less complicated to recover from a close defeat, and surely with less scandalous resonance at the domestic and global level. However, the AKP complicated its own fate, positioning itself in a weak condition as it was defeated by the opposition twice, and again in the rerun with a “significant expanded margin of more than 800,000 votes.”

İmamoğlu stated that “more than a municipal election, it is about a fight for democratization in Turkey”. His victory provides a different connotation to the national political stage due to his promises and the economic influence Istanbul has. Whether the electoral results represent the the beginning of the decline of Erdoğan’s power — in my point of view, it is too early yet to evaluate the opposition’s victory in such a way — or is merely a fleeting “wind of change” that will be overshadowed along the years, it indicates the emergence of a new generation with new visions of politics in Turkey.  Thus, the opposition finally has a sense of power to shape the country’s political reality. If the new Istanbul’s mayor satisfies his electorate, fulfills his campaign promises in an optimal way and appeals to new supporters, it could have a major impact on the national elections in 2023. Regardless, nationally and internationally “whispers will now grow louder about the beginning of President Erdoğan’s end.” İmamoğlu’s victory is most important because of his gift of a “new hope” to a city ruled by the same “premises” for years, hope for a marginalized and distressed population that is looking for a substantial change. Maybe his victory is the “wonderwall” Turkish people need, the light in the dark.