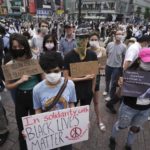 This spring, as some countries began to reopen after months of COVID-19 lockdowns, youthful rebellions broke out inside the two most powerful states in the world, the USA and China. The Black youth of Minneapolis, their allies, and countless others across the USA expressed their anger on the streets over yet another police murder, which was one too many. During the same days, the youth of Hong Kong renewed their protests against new anti-democratic moves by the Chinese government. The US protests, which grew into a massive nationwide Black Lives Matter uprising, also had a major international impact. In both cases, the USA and China, the youth did not flinch in the face of brutal police repression, inspiring their elders and many others around the world. These youth face a world of mass unemployment, precipitous economic inequality, and growing racial oppression fueled by right-wing populism, all of it worsened by COVID-19 and the economic meltdown.

From the beginning of the COVID-19 pandemic, workers also resisted attempts by capital and the state to keep production going, endangering their very lives. Here, the Italian working class, with its long militant tradition, led the way with mass strike actions. In March, according to a report from CGIL, the main union federation,

“From the Dalmine steel mills of Bergamo to those of Brescia, from the Fiat-Chrysler plants of Pomigliano in Naples to the Ilva steel plant in Genoa, from the Electrolux factory of Susegana in Treviso to many small and medium-sized companies in Veneto and Emilia Romagna, from the Amazon warehouses in the provinces of Piacenza and Rieti, to the poultry and meat processing companies in the Po Valley, there were thousands of striking workers who came out into the squares and streets, strictly at a safe distance of one meter apart from each other, as prescribed by the government decree” (Leopoldo Tartaglia, “Dispatch from Italy: Class Struggle in the Time of Coronavirus,” Labor Notes, March 20, 2020).

This forced the state and capital to concede, leading to better safety measures and for workers to be paid during safety-related work stoppages.

This limited victory in Italy affected unionized workers, but not the most precarious and marginalized workers, many of them immigrants.  It was from this kind of milieu in the USA, the oppressed Black communities of Houston and Minneapolis, that George Floyd, murdered by four Minneapolis police, emerged. Like so many Black working-class women and men, Floyd was semi-unemployed due to COVID-19 at the time that police choked him to death in slow motion in broad daylight, as witnesses from the Black community looked on and pleaded for mercy. Floyd’s unconscionable death has been seen as a form of lynching, but it also recalls the torture and executions carried out for centuries inside US slave plantations, where the audience was other enslaved people, and the purpose was to create dread by “making an example” of someone.

As many have also pointed out, the strangulation of George Floyd needs to be seen in the context of 400 years of slavery and the obdurate objective structures of racial oppression in the USA, from outright slavery, to Jim Crow, to today’s mass incarceration. The poison of racism oozes through the sectors of employment, housing, education, healthcare, and policing, among others. Racialized capitalism in the US actually began under British colonialism as part of their widely-used policy of “divide and rule,” from Ireland, to the Indian subcontinent, to Virginia. That strategy favored one sector of the populace against another, in order to prevent class unity against the rulers. In seventeenth-century Virginia, this meant arming poor but formally free whites and giving them police power over all Black people, most of them enslaved. This policy was enacted in order to prevent another outbreak uniting white and Black labor, as had occurred in Bacon’s rebellion in 1676. Today’s police forces originate in part in the white militias that received rewards for capturing fugitive slaves.

But the racial history of the US needs to be understood subjectively as much as objectively, in short, dialectically, if we are fully to grasp the current juncture. For today’s rebellion on the streets can also trace itself to that uprising in early Virginia. In this sense, US history needs to be grasped as one of constant revolt and resistance in the face of racial and capitalist oppression. Here, one could mention (1) the slave revolts led by Denmark Vesey (1822) and Nat Turner (1831), (2) the whole period of Abolitionism, Civil War, and Reconstruction from the 1830s to the 1870s, (3) the southern rural Black Populists and their white allies in the 1890s, (4) the massive and socially progressive Black nationalist Garvey Movement after World War 1, (4) the mass interracial labor and Civil Rights movements of the 1930s, (5) the Civil Rights and Black liberation movements of the 1950s throughout the 1970s, and (6) the current period exemplified by movements like Occupy and the Sanders campaign against economic inequality and the development of Black Lives Matter, which preceded even the 2016 Sanders campaign, into a mass movement this spring that has drawn hundreds of thousands into the streets.

Today, as with the greatest of those previous movements, the Black masses have taken a vanguard role, but a wider movement has emerged involving youth of all races and ethnicities. As so many times before, the rulers and their representatives have tried to distinguish between “good” protesters and “illegal,” “violent,” and “outside” ones. Thus, after the mass rebellion against police brutality in 1965 in the Black ghetto of Watts, Los Angeles, some tried to blame “Cuban agents,” but even the official McCone Commission led by a former head of the CIA could find none. Similarly, today’s far-right Trump administration blames left-wing agitators from the Antifa movement, although they can show no concrete examples. What is true is that hundreds of thousands came onto the streets all across the country under the slogan “Black Lives Matter,” that a police station was burned to the ground in Minneapolis, and that luxury shops in the Los Angeles area were attacked by protesters who scrawled slogans like “eat the rich” on walls. After over a week of rebellious actions across the land, all four Minneapolis police murderers were finally arrested, but this came after no less than 13,000 protesters had been detained.

Demonstrators were cruelly gassed and clubbed near the White House by direct presidential command, in order for Trump to show “toughness” at a photo op after it had been reported he was cowering in the basement.  Even Trump’s threat to use the regular army on the streets did not deter the demonstrators, but it did cause dissension within the military leadership, especially after it was reported that officials had used the term “dominating the battle space.” As even retired General Martin Dempsey noted in protest, the law and military tradition restrict the use of such tactics to foreign enemies. But it is equally true that two decades of endless war abroad, of occupation and torture of civilians in Iraq and elsewhere, is blowing back into the USA itself, with police forces that are militarized as never before.  Another form of blowback can be seen in how Minnesota’s police have received training, at a half-day conference in Minneapolis, from the US-funded occupation police force of one of the most reactionary powers in the world, Netanyahu’s Israel, where chokeholds and other “physical pressure,” i.e., torture, of Palestinian detainees is totally legal. These facts show that moves in the USA toward an authoritarian state are not limited to the Trump administration, but can also be found in liberal Minneapolis.

Less noticed but also extremely significant has been the resurgence of the youth movement in Hong Kong against Chinese government attempts to extinguish all democratic rights in that semi-autonomous city. As the threat of COVID-19 lifted a bit, the youth of Hong Kong were the first anywhere in the world to reassert their pre-COVID movement on a truly mass scale.  Inside China, quieter dissent exists amid deepening repression, especially in Wuhan, where the regime covered up the full extent of COVID-19 for weeks, thus extending the suffering in China and the world. On June 4, the 31st anniversary of the crushing of the China-wide student and worker uprising of 1989, tens of thousands of Hong Kong youth gathered for the annual commemoration, despite the event having been banned due to COVID-19. Thwarted by popular protest in their attempts to get a series of repressive measures through the Hong Kong legislature, China’s top leader, Xi Jinping, has decided to act directly, an extremely ominous turn. It should also be noted that the Hong Kong protests have never been only about political issues, as residents also face a precipitous increase in economic inequality, as investment capital from the rest of China has led to skyrocketing rents and other forms of heightened capitalist oppression. For its part, while some governments have issued verbal protests, unelected global capital is solidly backing Xi’s repressive measures, with all due cynicism: “There will be some unhappy people for some time,” said John L. Thornton, a former president of Goldman Sachs who has close ties with the Chinese regime, “But the drum rolls, the dogs bark and the caravan moves on. That’s the political judgment” (Alexandra Stevenson and Vivian Wang, “Why China May Call the World’s Bluff on Hong Kong,” New York Times, June 4, 2020). Thornton’s racist comparison of the Chinese people to dogs should also be noted.

Particularly in the USA, spring 2020 marks the beginning of a new era of radical opposition to the status quo on the part of a generation of youth facing bleak prospects, in a world not of their making. A veil has been lifted by a wrenching series of events – COVID-19, economic depression, and racist police murder – and by the creativity and persistence of the uprising, revealing the putrescent, racist structure of capitalism for all to see.