No Justice, No Peace! Raising the Social Cost through Direct Action! 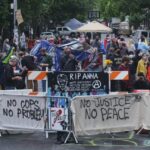 In the late 1960’s, McGeorge Bundy, who had been the national security adviser to Presidents John Kennedy and Lyndon Johnson, in a debate at MIT, said he had turned against the Vietnam War. Bundy said he now favored U.S. withdrawal from Vietnam not because the U.S. war was immoral or wrong or not in U.S. “interests,” but rather because college students, especially at elite schools, were becoming radicalized. Rather than becoming government officials and administrators or corporate managers, they were rejecting these future possibilities and becoming revolutionaries who wanted to overthrow and transform the U.S. economic and social system. McGeorge Bundy, a faithful servant of the ruling class, was in essence admitting that the social costs of pursuing the Vietnam War had become too high because it was weakening the stability and reproduction of the U.S. empire and domestic rule.

Bundy’s fear was that the Vietnam War was causing the growth of a radical and activist left in the United States whose commitment to ending the Vietnam War, to ending racism and capitalism by any means necessary was too high a social cost, greater than continuing the Vietnam War. This is the essence of the concept of raising the social cost and the belief by many from the 1960’s to the present in the value of militant actions, ones that go beyond what are legal and peaceful. The politics of “No Business as Usual” or interrupting the normal day-to-day functioning of capitalism is consistent with this idea of raising the social cost.

Today in the Black-Lives-Matter-led Movement there are various examples of militant tactics. These include but are not limited to: fighting back against the police and right-wing militias, painting graffiti, taking down or destroying racist monuments, constructing barricades and occupying public spaces and streets, including freeways. Breaking windows of financial institutions and of major corporations and stores such as Starbucks and Amazon have also been frequent. The reasonable belief is that this will raise the social cost by increasingly legitimizing these actions, and increase the numbers of participants involved and lead to the growth of these actions throughout the United States and beyond. The hope is that others previously uninvolved will support and get involved in social movements and actions that go beyond asking for very limited reforms; that the boldness and commitment demonstrated will appeal to growing numbers, especially but not limited to young people. Growing numbers of individuals and growing social movements that have broken with the ideology that there is no alternative to neoliberalism (TINA) and acting on the belief that there is a liberatory alternative to racial capitalism is central to raising the social cost.

Based on personal observation, this concept of raising the social cost has motivated, sometimes consciously and more often, less explicitly, some of the actions of the resistance from the Occupy Wall Street Movement of 2011 to the Black Lives Matter Movement today. This is often expressed by the slogan, “No Justice, No Peace.”

Raising the social cost is an important aspect of a strategy of building power from below and winning demands. One danger is that partly as a result of these more militant actions, increased government infiltration, and public support for “law and order” and for repression will result. An example of the ongoing federal government response is the recent sending by the Trump administration to Portland, Oregon, of Homeland Security and other para-military federal forces without name tags or identification of who they are. They have violently attacked Portland demonstrators with tear gas and rubber and pepper bullets causing a few serious injuries and they have snatched demonstrators off the streets and forced them into unmarked vans. So far this police state tactic has backfired as thousands of people of all ages joined these nightly protests in solidarity with those being attacked. Rather than being intimidated, people have taken a strong stand in the streets against this overtly authoritarian behavior of Trump. Gaining support from those less militant and those deeply concerned about civil liberties provides some protection and also raises the social cost to the government of repression and infiltration.

Direct action that goes beyond what is legal is one — but only one — important part of a strategy in this period to win key demands such as demilitarizing, disarming and defunding the police, single payer health care for all, including for undocumented immigrants, abolishing ICE, a Green New Deal, reparations, releasing prisoners, affordable housing, free childcare, etc. Direct action is only part of a strategy. Popular education, rallies, demonstrations, building organizations, institutions, and ongoing campaigns are central to a many-pronged and multi-faceted strategy. We need more political economic analysis, more organization, and major wide-spread and ongoing campaigns around these demands. Although it varies from city to city, this has been somewhat lacking in most places.

Actions that go beyond what is legal will always alienate some allies and even more those who are opposed to significant and positive changes in this system of racial capitalism. This cannot be avoided. However, if our actions are not clearly understandable to those who sincerely want major reforms and our targets do not seem to be complicit in major ways with the ongoing police violence, we do not raise the social cost and our well-intentioned actions can even be counterproductive.

We should aim to minimize the disruption of the lives of people we are trying to win over and focus on disrupting the major institutions that uphold a racist capitalist society. For example, if roads are blocked in pursuit of preventing entry to a clear target such as a prison or an immigrant detention center or preventing transport of military weapons that is likely to raise the social cost. Similarly, if we are pursuing a general strike. On the other hand, closing a major freeway when people are returning home from work is less likely to build our social movement unless it is directly connected to an ongoing campaign and also that those in power are blamed rather than the protesters for causing delays in getting home. In this period, there is more public support for occupations of public space or blocking entry to a police station or a major corporation, or doing political art on businesses and public property, or wildcat strikes of essential workers than there is for damaging property such as by breaking windows of a bank or other corporations or city hall.

In downtown, Olympia, WA, the city closed and fenced off the Artesian Well park, a place for the gathering of street people and the houseless, as part of a plan for gentrification. During a few of the recent actions that have been occurring daily in Olympia since the murder of George Floyd, people have cut these chains and fences, temporarily opening the Artesian Well. This action has been supported by many non-protestors and considered legitimate even though city property was damaged. Similarly, rocks thrown through the police station or city hall or major banks have often had similar reactions. Relevant graffiti is usually supported by the potential base. So are loud demonstrations at jails or immigrant detention centers, often called noise demonstrations, even if protesters are trespassing. On the other hand, breaking the windows of small businesses, even if they indirectly contribute to gentrification, legitimizes the police to many and does not help grow the movement to defund or abolish the police. These actions do not raise the social cost to those in power. Social cost is not the economic cost of replacing store windows; it is a mistake to understand it as the dollars and cents cost.

There is no formula for deciding beforehand what tactics raise the social cost and which ones don’t. It is contextual and requires an in-depth knowledge of the political economic context and how our potential base is likely to interpret our actions. The more connected we are to people who are not active in the streets, the more likely we are to have the necessary ability to make educated guesses so we can change our tactics as we reflect on what we have been doing and how it is received.

Although I disagree with the breaking of windows of most businesses at this moment, and am against the breaking of the windows of any and all small and local businesses, I oppose condemning protesters who are breaking a few windows. Many are young and angry, multiracial and of many genders, poor and working class. They are rebelling against racist police violence and an economic and social system where they see no future for themselves and their friends because of climate change and the limited possibilities of decent jobs. We should reach out and listen before we criticize some of their actions. We have a much better chance of being heard and our criticism being considered if we are in the streets together. If it is possible and sometimes it is not, some agreed upon guidelines that are not restrictive can be useful. These direct-action resisters have the potential to be or already are an important part of social movements and organizations that demand a better world.

Some life-long friends have expressed concern that the militant actions that I have been analyzing and for the most part supporting will unwittingly play into the hands of President Trump. They fear it will increase his chances for reelection even though he is very far behind in all of the polls at this time. According to this reasoning, Trump is trying rescue his campaign by a law-and-order campaign that highlights chaos in the streets. Trump promises that if re-elected he will restore order and security by any means necessary. Using the Nixon playbook from 1968, Trump will appeal to the fears and racism of white voters to turn the tide. The argument is that we should not engage in those actions that feed into this strategy.

Trump’s reelection would be an absolute disaster. However, I do not agree that the entirety of actions in support of racial justice, including most militant direct action, are likely to aid Trump’s re-election. Consistent with other surveys, in a poll conducted for ABC News, July 12th-15th, 2/3 of the respondents said they both support Black Lives Matter, and also that Blacks and other minorities are denied equal justice in the criminal justice system. Fifty-five percent answered they see “the recent killings of unarmed Black people by police as ’a sign of broader problems’ in police treatment of Blacks, rather than as isolated incidents.” All of these percentages are significant increases from a few years ago. Rather than separate the actions over the last ten weeks into good and bad actions and good and bad protesters, there is an ongoing continuum of actions. As a whole, they are increasing the understanding of institutional racism. This further reduces Trump’s popularity and decreases his and Republicans’ electoral possibilities. His sending of federal paramilitary forces to Portland to dominate the protesters was a sign of desperation and seems to have backfired. They caused larger protests and are being withdrawn.

A significant racial justice movement is growing. Let us not try to put the brakes on it for fear that it will lead to Trump’s reelection. There is no evidence that the tide is turning towards Trumpism.