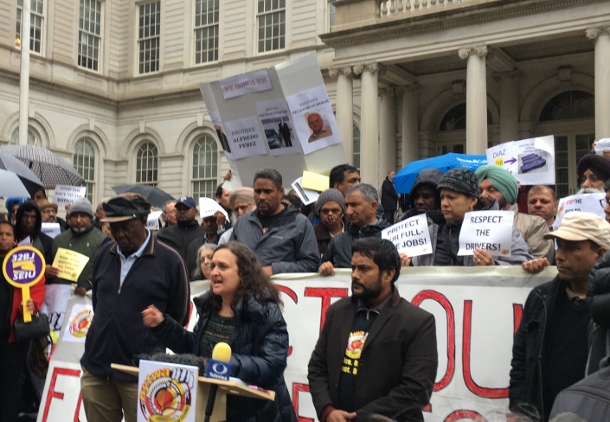 Over the past four months, four New York City taxi drivers have been pushed to suicide in an industry that is becoming increasingly dangerous. In response to the recent deaths, the New York Taxi Workers Alliance has launched a campaign for regulation and released its own proposal to re-establish driving as a viable occupation.

On April 25, the Taxi Workers Alliance demanded that city leaders address the lethal impact of lax regulation of app-based, ride-hailing services at a press conference in front of City Hall. The conference preceded a hearing on April 30 concerning regulations for app-based companies.

The business model offered by Uber and Lyft, they argued, has been instrumental in lowering labor standards so that drivers from across the taxi industry — whether they are behind the wheels of yellow cabs, green cabs or black cars — are literally working themselves to death. Ride-hailing companies have gained notoriety for being able to put an unlimited number of vehicles on the road, underpaying drivers and even going so far as to not recognize them as employees. This has created a “race to the bottom” with severe repercussions.

Before shooting himself at the gates of City Hall Park, Douglas Schifter called the industry in which he’d been working for decades “the new slavery.” Schifter wrote this in a suicide letter he posted on Facebook and blamed the Taxi and Limousine Commission, the Mayor’s Office and Gov. Andrew Cuomo for promoting deregulation without regard for the impact on workers.

Joined by fellow founders Biju Matthews, Beresford Simmons and Taxi Workers Alliance organizer Mohammed Tipu Sultan, the NYTWA’s executive director Bhairavi Desai addressed the assembled drivers and members of the press. “No matter what Uber wants to claim,” she said, “this is a struggle about the workers trying to defend a full-time job in a gig economy that offers nothing but poverty pay.” Founded in 1998, the alliance currently represents over 50,000 drivers throughout the city and has affiliates across the country. It has played a pivotal role in defending workers’ rights and livelihoods from the impacts of deregulation.

According to Matthews, the situation created by Uber and its peers has taken a broad psychological toll on drivers. It is a situation that became even more dire due to Uber clogging city streets and shrinking worker income by constantly adding new vehicles. He hopes this is the last spate of suicides, noting that the alliance regularly refers drivers to suicide prevention services.

Danilo Castillo Corporan leapt from the window of his Manhattan apartment in December of 2017 after being told by the Taxi and Limousine Commission that he could lose his license for picking up an illegal hail. Charges against him were dropped the day after his death. Castillo penned his suicide note on the back of his summons, citing the “disastrous state” of the industry. Corporan had been a Bronx-based driver, as was Alfredo Perez who also committed suicide earlier this year.

On March 16, yellow cab driver and medallion owner Nichanor Ochisor hung himself in the garage of his Maspeth home. He, like so many other drivers, found himself starved of fares after Uber led the charge in flooding the streets with vehicles. Ochisor and his wife both worked but found their combined income to be half of what he had been making individually before app-based cars flooded the streets with the blessing of both Gov. Cuomo and the mayor’s office. Last year there were a total of 83,000 app-linked cars, which outnumbered the city’s remaining yellow and green cabs. Increasingly burdened by mortgage payments and mounting debts on his medallion, Ochisor saw no way out.

In response to these tragic suicides, the Taxi Workers Alliance has gathered drivers from all sectors and their allies for repeated demonstrations in front of City Hall. They demand action to address the wide reaching harm caused by ride-hailing companies’ dominant position in the gig economy and their antipathy to regulation. These are not limited to promoting hazardous labor conditions or normalizing inconsistent and low pay. Companies like Uber and Lyft have also ensnared drivers in a web of predatory financial relationships and have been accused of discriminating against disabled passengers. City council member Ruben Diaz Sr. and members of Disabled In Action Metro NY, a group fighting for civil rights of disabled people, are among those who have joined the taxi drivers in this fight.

Working incessantly while earning very little is a norm across the industry. According to one study, 41 to 54 percent of Uber drivers make less than minimum wage. According to Taxi Workers Alliance member Bigu Haider, it’s common to work 70-80 hours a week and have nothing left over after paying rent and other living expenses. “If you want to save, you have to add 100 hours,” he said. Before taking his life, Douglas Schifter wrote he had regularly been working 100-120 hours per week.

The activists of Disabled In Action, who have been allies of the Taxi Workers Alliance since 1998, point out that the impact of ride-hailing companies’ allergy to regulation extends beyond worker abuse. Uber, Lyft and Via took the Taxi and Limousine Commission to court over whether or not they have an obligation to provide vehicles that disabled passengers can access. Starting this July, commission rules will mandate that 5 percent of outgoing trips from taxi bases be wheelchair accessible. This is part of a broader effort to ensure that half of all New York City taxis are able to accommodate passengers with disabilities. Uber, Lyft and Via filed a petition with Manhattan’s Supreme Court in early April to have the same Taxi and Limousine mandate “vacated and annulled.” “They should just bite the bullet and stop fighting the system,” Disabled in Action’s president Edith Prentis said. “You don’t want to follow the rules in New York? Then get out.”

In response to these companies’ intransigence when it comes to being regulated, Ruben Diaz Sr. is backing a measure that would require the city to vet new app-based services. Only those that fulfill an “actual need” would be allowed to operate. Additionally, this legislation would require drivers to work with only one company. Battling against diminishing incomes, many drivers currently shift from driving the city’s cars to working under one or more ride-hailing companies on a regular basis.

The Taxi Worker’s Alliance has put forward its own position, though. Their plan offers a model for fair labor standards that would also check the power ride-hailing companies have gained in New York. A cap on the number of ride-hailing vehicles, a wage floor based on the yellow and green taxi meters, an increase in fares, industry caps on drivers’ expenses and an end to predatory leasing practices are among the key points of the plan.

“We are asking for an immediate moratorium on new cars,” Biju Matthews explained. “Then, through attrition we have to bring the numbers down.” The cap itself, however, will not provide a solution to drivers’ woes concerning pay and saving. That is why Matthews says the wage floor is crucial. The plan also demands the city’s congestion pricing scheme, which would fund maintenance of the MTA, not burden drivers and that the city implement the health and wellness fund, which is the product of Taxi Workers Alliance victories in 2012 and 2013.

Biju Matthews is optimistic about the prospect of pushing regulations through despite Gov. Cuomo’s longstanding support of Uber and its model. “I think there’s enough support in city council that we’ll be able to see this through … there at least eight or 10 city council members that openly come out to say they openly support the alliance.”