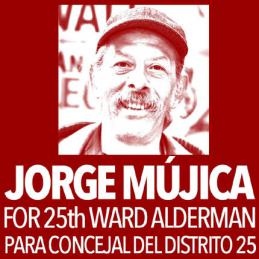 Chicago's 25th Ward is a gerrymandered district that was drawn for the benefit of the incumbent, Danny Solis. Solis is an erstwhile community organizer of the Alinsky school gone over to the dark side. The ward is located just southwest of Chicago's downtown, forming an upside down "U" wrapped around the University of Illinois at Chicago campus. The west wing includes parts of the largely Mexican Pilsen neighborhood. The apogee includes parts of Chicago's well-to-do, professional near west side then swoops down through the Union Station rail yards to include much of the south side's Chinatown. The previous ward boundaries made a district heavily Latino. The current ward has a bare majority of Latinos, Mexican mostly, with some Puerto Ricans and other Latino nationalities.

The ward ended up with three other candidates in addition to Solis and Mujica. Roberto Montano is a businessman and, in the past, Solis' Chief of Staff. It's hard to say why he was running though it may have had something to do with Mayoral candidate Willie Wilson. Byron Sigcho was the other credible left of center candidate. An immigrant from Ecuador, a doctoral candidate in Education at UIC and very much a student politician, he had done some significant research into charter schools. Sigcho had the endorsement of Reclaim Chicago, the electoral coalition backed by National Nurses United. And finally there was Ed Hershey, a member of a small obscure Trotskyist sect. Was that redundant? In any case, Hershey seemed to feel the campaign needed a real socialist.

Mujica's campaign grew out of the Chicago Socialist Campaign (CSC). The CSC was organized in response to Kshama Sawant's victory as a socialist in Seattle. Initially there was interest from several possible candidates for alderman. Ultimately, three ran for office. One won. Only Jorge Mujica decided to run as a socialist.

Meetings of the CSC sometimes were as large as a hundred people, many of whom were not members of any socialist organization. Unfortunately this did not translate into election workers. Those who did volunteer were often totally without experience in election campaigns and most did not live in the district. It's easy to be snide about this, and people have commented about leftists who like to sit and complain about Democrats. But Mujica pointed out that the CSC drew people from across the city. If he had been running for a citywide office, as Sawant did in Seattle, there would have been opportunities to be involved near at hand for everyone. Instead, there were often important contests closer to home.

And it's not as if Mujica himself was able to put in the time a campaign requires. He's not a rich man and had to work most of the campaign season. Otherwise, Mujica himself is reasonably credible as a candidate for city council. He was one of the organizers of Chicago's huge May Day immigrant rights marches several years ago, and that's just the most visible of the organizing he's done. He's been involved in Mexican electoral politics, and the aldermanic campaign was his second campaign in the U.S. Mujica is a personable fellow with a lively personality, articulate in both Spanish and English, and easy to look at even if he is rather more shaggy than the bourgeois image of an official. Well this is a socialist campaign, yes?

Money was a problem for the campaign. It did have a paid campaign manager. The campaign did manage two bulk mail drops targeted at voters in the Pilsen neighborhood. And the campaign did have a good social media campaign directed at that same constituency. AFSCME Council 31 endorsed Mujica, as did a council of Chicago area CWA locals, bringing some mainstream credibility and money to the campaign. Chicago DSA raised over $1600 in early money and not all of it from DSA members.

The mayoral contest also was a problem for the campaign. The Mujica campaign made no endorsement for Mayor. But many election activists in the ward were committed to working for Jesus Garcia's campaign for Mayor. An endorsement of Garcia by Mujica might have attracted some of those campaign workers but then again maybe not because it was clear that Garcia's campaign was not likely to endorse Mujica. The 25th Ward is in the backyard of Bob Fioretti, another a liberal candidate for Mayor, and neutrality left open the possibility of some support from his people. Ultimately though, the CSC, with its commitment to independent electoral politics, mostly felt Garcia was too much of a "Democrat."A great deal has been said about voter turnout. It was considerably less than the municipal election four years ago, but it was actually not much different than the municipal elections eight and twelve years ago. The 25th Ward was near the median for this election. The Board of Election did have its thumb on the scale, though. It set up the Ward's early voting site in Chinatown. Solis escaped a run-off election by only several dozen votes, prompting the Sigcho campaign to file for a recount of several precincts. A few of the items listed in the complaint may have plausibly been voter fraud but most of it sounded like sloppy inattention to procedure. Whatever the case, it made no difference. The official results put Solis at 3811 (51.07%), Sigcho at 1383 (18.53%), Mujica at 907 (12.15%), Montano at 748 (10.02%), and Hershey at 614 (8.23%).

Of the groups participating in the CSC, the International Socialist Organization, Solidarity, and Chicago DSA came through. DSA raised money, provided opposition research, did issues research, provided mailing services, and had a dedicated handful of members who gathered petition signatures, canvassed voters, blitzed precincts, leafleted L stations, and did election day work. I think we could have done better, particularly with recruiting more people to work, but it's also true that Chicago DSA has no members in the 25th Ward. Will this coalition effort be duplicated in future elections? It would be a good thing if it were, but I'm inclined to be skeptical. Chicago DSA is open to the possibility. We'll see.

*This article was originally published in New Ground, a publication of the Chicago chapter of the Democratic Socialists of America (DSA). Thanks to New Ground and to editor Bob Roman for permission to republish.