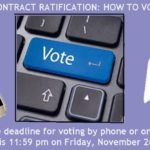 Editor’s note: Members of the Professional Staff Congress (PSC), the union representing professional staff and faculty at City University of New York (CUNY), are voting on a proposed agreement, a Memorandum of Agreement (MOA)  with CUNY.   The argument to endorse the agreement is found here.  In this piece,  Glenn Kissack, a Hunter College High School retiree member of the PSC  urges PSC members to reject the MOA and “vote no.”  Both pieces are being published without change, as the authors have presented the arguments and facts. We invite replies.

I’m grateful that PSC members have had time to read and discuss the terms of the MOA, and thankful for the opportunity delegates have had to exchange views on whether to accept or reject the proposed agreement.  In my first 17 years of teaching I was in the UFT, so I know that not every union allows this type of internal debate.

I’m also appreciative of the many hours that members of the negotiating team spent at the table opposite management and the even greater number of hours spent preparing for those negotiations. I’m further appreciative of being in a union that prioritized winning $7K, not only because adjunct professors need it, but because it’s crucial to fighting a contingent labor system that devalues both the labor of professors and the education of CUNY students. I value the energy, commitment and unity that PSC members – from every constituency – demonstrated at hearings, in Albany, on picket lines, at rallies and in arrests for civil disobedience.

Many of my PSC friends will be voting  “Yes” on the MOA, making reasonable arguments for doing so. I respect that, and I know we’ll be shoulder to shoulder in the battles to come. Yet I believe a plausible argument can be made for rejecting the MOA.

The MOA is the result of an unfair system of negotiations

Bernie Sanders is right when he says that the billionaires have rigged the political system, using their unparalleled wealth to fund Super PACs and lobbyists, to own the media that editorializes in their interests, and to establish think tanks and influential groups like the Citizens Budget Commission and The Partnership for New York that insist on “fiscal responsibility” – which keeps taxes low on the same companies that finance their operations. Governor Cuomo echoes their call for fiscal conservatism, caps on spending and maintaining modest taxes on those who have contributed large sums to his electoral campaigns, including real estate titans like Bruce Ratner, Richard Lefrak, Stephen Ross and Leon Litwin, and billionaires like the Koch brothers and Ken Langone.

So it’s not surprising that labor negotiations have also been rigged in favor of Cuomo and the moneyed interests behind him. In NYC, we see the following constraints on bargaining:

The proposed MOA is the product of the strong centripetal pull of these forces towards a contract acceptable to Cuomo, one that doesn’t disturb CUNY’s contingent labor system or austerity spending.

I agree with Pamela Stemberg who wrote in her Daily News op-ed:

Gov. Cuomo wins. Offering too little, too late and being praised for a breakthrough makes the public think that we have resolved the issue of equity for part-time faculty at CUNY. Mayor de Blasio wins. He will tout his progressive horn even as adjuncts remain mired in the second of his two cities. The state’s governing bodies will also claim that CUNY has addressed inequity.

Cuomo can claim he didn’t abandon his 2% spending cap because while the state will pay much of the costs of added adjunct office hours, it’s not paying for the 2% across-the-board increases. And now he, the CUNY Board of Trustees, and the leadership of the state legislature will consider the “adjunct problem” to have been solved. If squeezing more money out of Albany proved largely unsuccessful for the current fiscal year, how much more difficult will it be in the spring of 2020?

Every time we accept a contract that conforms – or nearly conforms – to the pattern imposed by people who don’t have the best interests of CUNY faculty, staff and students in mind, we signal to those outside interests that we will continue to compromise on their terms, and they will continue to take us for granted.

Disappointments in the MOA

Everyone at the Delegate Assembly on November 7 will have wanted a fully funded contract that’s fair to the members and provides a measure of redress for those at the bottom. However, the obstacles put in our way by Cuomo, for the benefit of the business elite, has produced mixed results in the MOA. Along with real improvements, there are disappointments:

Public colleges in California pay their adjuncts (called lecturers) considerably more. Here in NYC, colleges like Fordham University are higher salaries. By the spring of 2021, an English or History adjunct professor with seven or more years experience will be paid $8000 per course; a new adjunct will be paid $7000. (It is true that adjuncts at Fordham do not currently receive paid health insurance, but then most adjuncts at CUNY are not receiving health insurance either. We live in one of the wealthiest – and most costly – cities in the world. We can afford to pay for both high salaries and decent health care.)

The bulk of the salary increases for adjuncts is to come from additional paid office hours, which has its problems. Curiously, CUNY considers the added office hours to be “productivity increases” while it’s said to be payment for work adjuncts are already doing. There are legitimate concerns about what tasks college administrations will expect adjuncts to perform. And there is the reality that many, perhaps most, adjunct professors do not actually have an office for their “office” hours.

In 2022, it will cost CUNY $44,000 to cover the salaries of adjunct lecturers teaching eight 3-credit courses for the year. This will be less than what the lowest-paid lecturer will receive and considerably less than what most full-time lecturers earn and so the economic incentive to continue hiring adjuncts to teach the majority of classes at CUNY will remain. The goal of beginning to dismantle the two-tier labor system will have eluded us.

Who Pays for the Contract?

The PSC has long maintained that contracts should be fully funded by the state and the city. However, the Governor has a different view:

While there are certainly gains in the proposed MOA, we should hesitate to call an agreement “historic” whose method of funding compromises the quality of education for CUNY students. Further, the Governor’s forcing CUNY to internally finance collective bargaining agreements will undoubtedly mean further $200-a-year tuition hikes for students, at the same time their education is being degraded.

There are some who argue we should ignore the problem of self-funding and its consequences and hope the next fiscal year will be rosier. I respectfully disagree.

Can we do better?

There is a long history of union members rejecting settlement agreements. In 1995, for instance, teachers in the UFT rejected a contract offer. Of course, there’s no guarantee that rejecting a contract will produce a superior one. However, the PSC has the leadership – principal officers, chapter chairs, delegates and rank-and-file activists – capable of organizing a struggle for a better agreement. We would have to reevaluate our strategies and consider adopting the bargaining-for-the-common-good approach of the Chicago Teachers Union. The CTU demanded more school nurses and counselors, protections for undocumented students, and affordable housing for teachers and for the families of students. At CUNY, we could build wider support from students, parents and the public by demanding a rollback of tuition, reform of TAP, making CUNY campuses sanctuaries for immigrant students sans-papiers, a living wage for everyone who works at CUNY, and a serious plan for producing affordable housing in a city with an intensifying housing crisis.