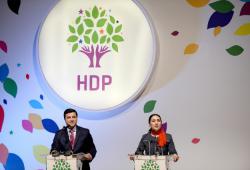 The main obstacle in Erdoğan’s quest for dictatorial power was the People’s Democracy Party (HDP), a party with roots in the Kurdish movement but that since its creation in 2012 has sought to appeal to a variety of leftist and civil society groups. HDP advocates for transparent politics, and is committed to representing labor, ecology, and women’s rights associations in addition to artists, writers, workers, different ethnic and religious groups, the unemployed, the retired, farmers, and those with disabilities. The party also emphasizes its grassroots, radical-democratic orientation: “Our organization starts from the streets and develops into local assemblies in our neighborhoods.”

The stakes in the election were especially high as a result of Turkey’s undemocratic system of representation, which requires parties to obtain 10 percent of the national vote to enter parliament. Though the HDP worked to appeal to broad sections of Turkish society, it was clear most of its support would come from the heavily Kurdish southeastern provinces. Were the HDP not to pass the 10 percent threshold, the southeastern parliamentary seats would go to the second-place finisher—the AKP. Thus if the HDP failed to obtain 10 percent, the AKP was certain to have a comfortable majority in parliament.

Adding to the challenges facing the HDP (and other opposition parties) from the AKP’s enormous financial and media advantages was the large-scale violence and intimidation directed against the party in the run-up to the election. Though the most dramatic violence directed against the HDP was a June 5 bombing of a massive rally in the Kurdish heartland of Diyarbakir that killed four and injured hundreds, on June 3 the Ankara-based Human Rights Association announced 168 attacks had taken place against HDP. Violence against the party (including the brutal execution of Hamdullah Öğe, a driver of one of the party’s election vehicles) continued in the days before the election, though amazingly—and to their eternal credit—party supporters did not retaliate against what were obvious attempts at provocation.

By Sunday evening on the day of the election, it was evident the HDP would cross the threshold easily, ending up with 13 percent of the overall vote. Erdoğan’s dreams of an executive system are (for now) dead in the water, the AKP’s hopes for a parliamentary majority have been dashed, and an explicitly anti-capitalist, radical democratic party established just three years ago will enter the Turkish parliament. In addition, there will now be 97 women deputies (30 of 80 HDP MP’s will be women) in the 550-member parliament; though only 18 percent of assembly members, this is an all-time high and a hugely important development.

While leftists in Turkey and throughout the world should celebrate the success of the HDP and the thwarting of Erdoğan’s authoritarian ambitions, enormous tasks lay ahead. The AKP still obtained more than 40 percent of the vote, far more than the main opposition People’s Republican Party (CHP), at just over 25 percent. The rightwing National Action Party (MHP) increased its share of the vote, from 13 percent in 2011 to 16.5 percent in 2015. This means that more than 56 percent of the Turkish electorate voted for parties of the right, and an AKP/MHP coalition government remains a frightening possibility. Should some sort of coalition government not be formed, early elections may be called, and Erdoğan could attempt to use a new election to again push for constitutional change.

Capital’s pernicious influence on national democratic politics was evident the day after the election, as markets were “spooked” by the supposed threat of political instability, and the value of the Turkish lira fell to new lows while the Turkish stock market fell by 8 percent. While EU elites celebrate the “strength of the Turkish democracy,” it is obvious the ability of domestic and international capital to manipulate the democratic process in the interests of profit constitutes a massive challenge to the formation of alternatives to the neoliberal order, in Turkey as elsewhere. Economic instability could further play into Erdoğan and the AKP’s hands, as worsening conditions will be used by the party to criticize the opposition and to call for a return to “normalcy.”

A huge question in the coming weeks, months, and years will be the extent to which the HDP can form alliances with the CHP, an ostensibly social democratic party that is also the party of Mustafa Kemal Atatürk, founder of the Turkish Republic. Many traditional CHP supporters voted for the HDP with the primary aim of defeating Erdoğan and the AKP; whether, or the extent to which, they actually support the HDP agenda or ideology is an open question. Particularly challenging will of course be the “Kurdish question.” The HDP will remain committed to forwarding a stalled peace process regarding some form of democratic autonomy in the Kurdish provinces, while nationalist-oriented CHP MP’s will find it difficult to make common cause with a party many associate with the Kurdistan Workers’ Party (PKK), which has waged an armed independence struggle against the Turkish state since 1984.

Equally important for the left is the question of the relationship between political parties and social movements. Many readers of New Politics will be familiar with the Gezi Park movement of 2013; some see the success of the HDP as one result of Gezi protesters’ demands for a reinvigorated and egalitarian democratic society. If so, observers who see the HDP as the Turkish equivalent to Syriza in Greece or Podemos in Spain may be proven correct. A major danger, as in Greece, Spain, and elsewhere, is that electoral success can breed apathy among activists and popular sectors, as parliamentary politics takes precedence over movement building and direct action. Social movement organizations must be energized by the election, and work to take offensive measures against what remains a deeply socially conservative state.

Notably, however, no political party—HDP included—took an outspoken stance on a number of large-scale labor uprisings over the past two years. While all parties lambasted the ruling AKP after the horrific industrial murder of more than 300 Turkish miners in May of 2014, strikes in the glass and steel industries that were quashed by the government on the pretext of national security were greeted by opposition parties with silence or indifference. Likewise, no party openly supported a recent series of wildcat strikes by thousands of auto workers at plants across Turkey—though HDP co-chair Selahattin Demirtaş sent a message of support to strikers. While many of the workers (protesting their own management-friendly union as well as owners) formerly supported the populist AKP, opposition parties failed to seriously reach out to this potentially radicalizing force. Whether MP’s of the ostensible left—HDP or CHP—work to advance the rights of workers in the current neoliberal wonderland of Turkey will be a crucial question moving forward.

Ultimately, if the HDP and the leftwing of the CHP fail to address the needs of the vulnerable and exploited Turkish working class, there is little reason for people in the vast Anatolian interior to support them. The AKP has established a system of patronage for the poor in Turkey that works to maintain control through dependence as well as to build political support, and the party’s appeal to the religious rural populace remains largely intact. In short, the only real hope for the left is social organization and education of the masses above and beyond formal politics.

Yet the possibilities for Turkey inaugurated by the success of the HDP in 2015 should not be minimized. The enthusiasm generated by the election among the left must be channeled into popular forms of democratic political engagement throughout the country.