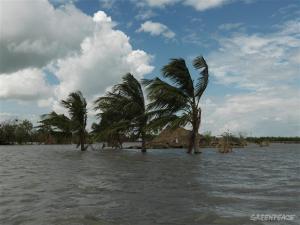 “Emphasizing with serious concern the urgent need to address the significant gap between the aggregate effect of Parties’ mitigation pledges in terms of global annual emissions of greenhouse gases by 2020 and aggregate emission pathways consistent with holding the increase in the global average temperature to well below 2 °C above preindustrial levels and pursuing efforts to limit the temperature increase to 1.5 °C above pre-industrial levels”

– Paris Agreement, 21st Session of the Conference of the Parties

The Stockholm Resilience Center, an internationally recognized research center on sustainability, considers Earth to have nine planetary boundaries. Staying within these boundaries is key to species survival and ecological sustainability. One of the boundaries is climate change, which is forecasted to produce high global sea level rise. The effect will be that coastal life in general for the species will be highly degraded.

By 2100, under any scenario, cities like New York City and Boston will in part be consumed by the oceans. The Inter-Governmental Panel on Climate Change, the leading global scientific committee on climate change, reports different sea level rise scenarios depending on mitigation strategies. Their baseline scenarios for global sea level rise, which lack “additional efforts to constrain emissions” range from .5 meters to .9 meters. By 2100 this would lead to at minimum some 72 million climate migrants, and possibly up to 187 million (2.4% of global population).

More specifically, in North Carolina where we reside, the science shows that sea level rise will amount to 39 inches. In the same report, we are cautioned “that delayed positive feedbacks might result in the method underestimating the contribution from land ice, resulting in total rise of over 1.4 meters.” Whether we use the IPCC’s more conservative estimates or the frightening local projections, the general consensus is clear. And yet, none of the proposed mitigation strategies attack the core problem, the dynamics of capitalism.

Let’s say we are owners of a mining company. This mining company has loans that accrue interest utilizing the resources it expects to extract as collateral. To continue operations, make a profit, and pay the interest on the loans, the mining company needs to constantly increase production and accumulation. Capitalism forces firms to maximize profit, just to have a portion of that profit reinvested back into the next production cycle, or risk going out of business. Capitalism then, can be considered an ‘open’ system, in that there is no end to accumulation.

Nature, however, is a set of ecosystems that together form our biosphere. The dynamic cycles between ecosystems contain possibilities of disorganization, think geological shifts or events like the ice age. But capitalism is the first set of social relations that fosters an internal enmity towards nature. Nature is seen from the point of view of capitalists as something to be dominated for the sake of profits. These contradictory logics, of capital and of nature, remain eternally at odds. This logic extends even to dealing with the crises that capitalism produces. When the Maldives goes underwater, some 350,000 climate refugees will be denied any meaningful or impactful assistance from the developed countries. It won’t be considered profitable.

This adds to the central ecological contradiction between capital and our biosphere, the uneven distribution of social benefits that the system has produced. These benefits have continuously accrued to the colonizers in the Global North. While developed countries have benefited historically from endless fossil fuel usage, the Global South has not. Rather, the Global South has been left to deal with the ecological crisis without resources to help form resilient communities. This raises serious questions about climate justice, questions that won’t be addressed within the current COP framework.

In December, when the “good people” descended upon Paris and decided on a non-binding voluntary agreement, they did so assuming continued market and industry dominance. Neoliberal environmental policies are considered the only option. At COP 21, the utilitarian calculus of risk, the liability of externalities, and claims to loss and damages at international tribunals are agreed upon substitutes for real action. These policies are meant to mitigate and respond to the normal functioning of the capitalist system itself, rather than resolve its contradictions and environmental injustices.

To give some contemporary context, since COP 19 the main focus has been on “enhancing knowledge…strengthening dialogue…enhancing action and support” within the confines of a non-binding agreement that only “requests developed country Parties to provide developing country Parties with finance, technology, and capacity-building.”  In the COP 20 draft agreement there were options to strengthen this request for environmental justice. These were ignored for statements that did not assign blame in the adopted Paris Agreement at COP 21. There is no willingness to deal with the unequal ecological debt foisted upon the Global South.

Further, in the Paris Agreement no specific mention of the actual impacts of sea level rise were included, even though it is understood to be a principal driver of climate refugees. Not only will a meter of sea-level rise displace coastal populations, but the encroachment of seas will further erode wetlands in places like Louisiana and Florida which serve to protect inland structures from storms. The increase in severity of storms, coupled with the higher base of sea level means infrastructure systems like septic tanks will be displaced into the oceans.

As journalist Naomi Klein has recently reported, “﻿ The emissions targets outlined in the deal still amount to increases of 3 to 4 degrees Celsius.” This is exactly what we noted earlier the IPCC considers to be an absence of action. It is exponentially higher than the 1.5 degrees Celsius that leading climate scientists say is fundamental for stable life on earth. That target would keep the global sea level rise mean to a manageable .4 meters. Instead, Capital’s spectacle prevailed in Paris, the millions of future refugees left to calculate their risk.

An important historical analogy is poignant here. The Paris Agreement is as if COP President in Paris, Laurence Tumbiana, gleefully yelled at the crowds, “Laisse-les boire de l’eau salée!”