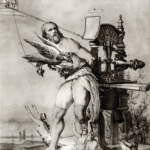 This small book is a very useful account of how Marx came to develop his materialist conception of history. His criticism of Hegel, his discussions with various Young Hegelians, his discovery and critique of political economy, his debt to Adam Smith – a very original and stimulating argument! – and finally, his elaboration of a new worldview are clearly explained. I’m afraid I cannot follow Rahim when he describes Hegel’s thought as “the philosophical expression of capitalism,” but his analysis of Marx’s critique of Hegel’s theory of the state (1843) is quite persuasive.

Why did Rahim choose as a title “A Promethean Vision”? He doesn’t elaborate on it, but he quotes a well known passage from the foreword of Marx’s dissertation on Democritus and Epicurus (1841): Prometheus is “the most eminent saint and martyr in the philosophical calendar.” Obviously for Marx the mythological hero deserves admiration for daring to confront the Gods, and stealing fire from the Olympus in order to give it to mankind. Rahim also prints a lithograph from the 1840s representing the young Marx, then editor of the Rheinische Zeitung, as a new Prometheus being tormented by the Prussian censor…

For many years now, ecologists of various tendencies have been criticizing Karl Marx for being a “Promethean” thinker, meaning by this the desire of unlimited human control and domination of nature. Now, this seems to me a serious misunderstanding, for various reasons:

— The original myth does not present Prometheus as “dominating nature” : he just dares to bring fire to the humans.

— The word “Promethean” is not defined in any English dictionary as referring to the domination of nature, but means “willing to take risks in order to create new things” (Cambridge Dictionary).

— By describing “Prometheanism” as responsible for the ecological disasters, some ecologists replace the real culprit, modern capitalist industrial civilization, by a mythological image. The ecological crisis ceases to be a historical phenomenon, related to a specific mode of production, and becomes an immemorial human tendency, since Antiquity.

— Although Marx speaks in some writings (e.g. The Communist Manifesto) about the “control of nature,” this approach is increasingly abandoned and replaced with the proposal to “control the relation between human societies and nature.”

I believe therefore that Rahim is justified in speaking about Marx’s “Promethean vision”, in the original meaning of the word.

My main criticism is that in the second part of the book, he ceases to keep a historical perspective and discusses Marx’s economic and philosophical ideas out of context, moving from The German Ideology (1846) to the 1859 “Introduction” to A Contribution to a Critique of Political Economy (1859) and back again to the early writings. In the first part the book, the movement of Marx’s ideas from his Young Hegelian perspective to a new worldview of an “activist materialism” (“Theses on Feuerbach,” 1845) is well documented. But the historical perspective is sacrificed in the second part to a kind of summary of historical materialism, reducing it to the well-known phrase from 1859: “No social order ever perishes before all productive forces for which there is room in it have developed ….”

Well, I believe that this determinist argument can be easily abandoned, for two strong reasons:

— Marx himself gave up this view, for instance when considering the possibility of a transition to socialism in “backward” Russia in his letter to Vera Zasulisch (1881), a text not discussed by Rahim.

— From the viewpoint of the present ecological crisis, it would be foolish to wait until “all productive forces for which there is room” in capitalism are developed. Another 20 years of “development of productive forces” in the capitalist system, and climate change will become irreversible, with catastrophic consequences for humanity…

I like very much Rahim’s conclusion: When speaking of the communist future, Marx thought that, as in ancient times, creating maximum wealth would cease to be the aim of society. Wealth itself would no longer be defined, as in bourgeois society, as an accumulation of more and more material goods, but conceived instead as a shared development of the needs, capacities, pleasures, and productive powers of individuals, freely associated.