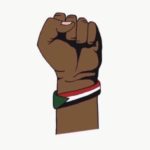 Sudan. The endless lines outside bakeries and gas stations suggest an almost willful naiveté about the dire economic and political situation. The Kafkaesque bureaucratic system requires an element of nepotism to vitalize it into animation. The lack of cash in banks, and the depreciation of the local currency force the people to convert and conserve money. The increased taxes on the average citizen and the tax cuts for those associated with the government produce distrust and disgust directed towards the state. The secret services arbitrarily arrest of persons who display even the slightest antipathy towards government doctrine and use gulag-like hidden torture prisons. All these phenomena, and others, have converged, and the implosion of this concoction manifests as a wave of zealous, righteous indignation that overwhelm every Sudanese person. There is a rumble in the atmosphere that can be felt all over the country. The echo of gun shots and tear gas booms ripple to the furthest corners of Sudan. From the naming and shaming of secret service officials on social media, to clashes between citizen and government, it’s a full-blown revolution!

Why? And why now? These conditions are by no means new to Sudan. The brutal tactics of the secret services were on gory display during previous protests, and the increased prices and scarcity of gasoline has been a reoccurring motif in northern Sudan since the split of 2011. The currency depreciation, though it is at its nadir, was already on a downward trajectory. There was always a vivid understanding of the corruption in Sudanese politics. I remember talking to a rickshaw driver last summer; naturally the final subject matter of the conversation was politics. My question, perhaps simplistic, was “why do the Sudanese people not revolt?” To which the rickshaw driver answered “to what end? To end up like Egypt or Syria? We know the situation is bad, but what happens when someone inherits a 30-year corruption debt, and what if the new president is as corrupt or worse?” There seemed to be a synergy of political awareness among those I talked to; the response was mostly similar to the rickshaw driver’s.

So, what changed? The frailty of the economy finally gave way, and it collapsed. Simply. It is no longer financially sustainable to work traditional professions in Sudan. During one of my patience-building exercises of queuing up for hours, sometimes days, in the gas lines of Khartoum, Mohammad, a child of nine years, came up to my window selling chewing gum. I was curious as to why he was still in the street at 11 pm, and where his parents were or siblings. Mohammad told me that, even though his father worked as bureaucrat and his mother was a teacher, he needed to sell all the chewing gum he had before he could return home and buy flour to make Kisra or Gurasa breads. It’s perhaps important to note that it was Mohammad’s summer holidays. In the not so distant past, a bottle of water used to cost one Sudanese pound; today it’s 12 pounds, with no increase in salaries. Beyond that, if you had money in the bank, you could not withdraw; opportunistic black-marketeers would stand outside banks and buy checks at 80% of their value.

The causes of the crisis are multiple, from the 1989 coup d’état to the 1997 embargo. Beyond the overt aetiology, I believe there are three complex happenings that may have aided in actualizing today’s reality in Sudan. First, the fragmentation of Sudanese society; second, mass migration of the middle class; and finally, the dependence on expatriates to stimulate the economy. Of course, this is not to remove any blame from the current government, or to in any way obviate accountability with determinism.

In Sudan, the fragmentation of society, ethnically and socioeconomically, insured the continued rule of the National Congress Party. The wars against South Sudan and west Sudan, and the propaganda programs helped in dividing Sudan to the point of splitting the country. These tactics also privileged a certain narrative that promoted the interest of the northern Arabic ethnic group in Khartoum. Today in Sudan, wealth and power is not spread equally; instead it is concentrated in a single ethnicity. The longer the current government remains in power the smaller the circle of privilege becomes. In recent years even the northern Arabs have felt the brunt of economic decline.

With the effects of economic decline being felt by most, highly skilled workers and professionals find themselves in a precarious situation, in which the inevitable collapse will lead to unemployment, regression, and pay cuts. Today, university professors earn less than $200 a month, where 15 years prior it was $1,000 plus. These deteriorations forced the middle class and the privileged to quickly migrate for better opportunities. This mass exodus marked the obliteration of the middle class, which had two effects on the socioeconomics structure of Sudan. Firstly, in place of the former middle class came the unqualified and unprofessional, who were not capable of performing the work of their predecessors. Thus, when the wife of the minister of health fell ill, the minister arranged for her to be treated abroad. Secondly, the gap between poor and rich became vast, and any person outside the umbrella of governmental privilege faced insurmountable obstacles, from arbitrary taxation to racketeering.

The expatriated professional middle class were successfully employed and managed to integrate into other societies, even creating small cohorts in major cities, i.e. London, Doha. With their financial ability, they would spend summers and other holidays in Sudan, more often than not, even send money to relatives and friends in Sudan. With the lack of production opportunities and skilled capabilities, there is nothing to stabilize the currency. The money spent by expatriates in Sudan, and sent to family and friends, is a major stimulus to the economy. The government relies on this stimulus so much that expatriates have their own bureaucratic system (the Organization of Expatriates Affairs, Khartoum), among other exclusive privileges. Due to the excessive corruption in the country, money from potential economic enterprises or foreign aid from other countries was devoured by government officials.

This dependency on expatriate cash flow proved to be destructive. Unlike the Philippines or Egypt or any other countries that have relied partially on expatriate contributions, Sudanese expatriates were not enticed with financial incentive schemes. On the contrary, expatriates are exposed to ‘special’ taxes, a targeted tax plan that exploits that bracket of Sudanese society. In addition to the special taxes, sending money to Sudan costs half the sent amount through conventional channels; the black-market values the dollar at 70 Sudanese pounds if you’re paying by check, and 80 if paying by cash. However, the official price, that is not even used by the government, is 40. All in all, the currency has three values, or more: cash price, check price, and transfer price. In recent years, the expatriates, having integrated into other societies and created a homey atmosphere there, and because of corruption, have become more and more reluctant to splurge in Sudan. Consequently, this has led to further economic disarray.

Today’s protest slogan in Sudan is “Tsgut Bss!” This translates as “Just collapse!” It seems to me that the political awareness shown by the rickshaw has been overwhelmed by dire economic realities, where the cost of one piece of bread today is the same as a sandwich, a soda and a cigarette not ten years ago. I would imagine if I asked the rickshaw driver the same question today, he would reply with “Tsgut Bss!” I occasionally find myself thinking about Mohammad, from the gas station; does he sell chewing gum every holiday, or even throughout the year? Or where would he be if we did not have a failed government? Or what if one day he needed more than flour? Or what if something sinister happened to the child in the dead of night – would his family even know what happened? All things outside his control.