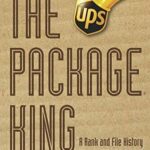 Long before the coronavirus pandemic gave them the official title, transportation and warehouse workers had become “essential” to the U.S. and global economy — and logistics industry giants like Amazon, Walmart and FedEx had become the engines of 21st-century capitalism the way that manufacturers like Ford and General Electric were in the 20th.UPS stands out among these modern behemoths as one of the only companies with a largely unionized workforce. In fact, UPS is the largest private-sector union employer in the country. UPS workers also make up the largest section of the Teamsters union, an incredibly polarized organization that has been home to the most-organized and long-term presence of both mobsters and socialists in the American labor movement. The Package King is subtitled A Rank-And-File History of UPS, and Allen centers his story on the century-long fight of UPS workers to wrest a livable job out of a company that treats them as machinery and to organize within a union that too often has treated them as a dues-paying cash machine. Package King is in part a business history or rather an anti-business one. Throughout the book, Allen uses Greg Niemann’s laudatory Big Brown: the Untold Story of UPS as a foil, turning Niemann’s narrative of a corporate success story on its head as a workers’ nightmare of ever-increasing micromanaging and exhaustion. Eschewing celebrity CEOs like Jeff Bezos, UPS promotes a corporate culture as bland as its uniforms, but under the radar, it has long been a leading corporate influencer in Washington, with a relentless focus on weakening the Occupational Safety and Health Administration, which received more worker complaints about UPS than any other company.The other side of the story told by Package King is that of the International Brotherhood of Teamsters (IBT), which began representing UPS workers when company founder Jim Casey went looking for a conservative, compliant union in the aftermath of the militant Seattle General Strike of 1919.For most of its history, the Teamsters have been led by autocrats like Dave Beck, who is said to have once asked, “Why should truck drivers and bottle washers be allowed to make decisions affecting [Teamster] policy? No corporation would allow it.” Current IBT president James Hoffa Jr., who in 2018 rammed through a concessionary contract with UPS even after a majority of voting members said no, is unfortunately cut from the same cloth.

Package King shows how massive concessions by these and other union mis-leaders — especially the one-two punch of allowing a lower pay tier for part-time workers in 1982 and then establishing in 1987 that the growing air delivery business would be handled mostly by part-timers — helped facilitate UPS’s growth into a global behemoth.

But the Teamsters are also a union with immense potential power that has been built by class struggle fighters, from the socialists whose 1934 general strike in Minneapolis laid the basis for Hoffa’s legendary father to organize the trucking industry, to former Queens UPS driver Ron Carey, who led multiple strikes against UPS — first in New York City’s Local 804 and then the historic national strike of 1997.

Carey was subsequently driven out of the union by an unholy alliance of employers like UPS, anti-labor Republicans, and old guard Teamster leaders, but the fight for militancy and democracy is still carried on by Teamsters for a Democratic Union, the longest-running union reform movement in the country. Through the narrative lens of one company and one union, Package King tells an effective story about the rise, fall and hopeful return of the organized working class in the United States.

In the introduction, Allen explains that the book is written in the tradition of The Flivver King, Upton Sinclair’s 1937 exposure of Ford Motor Company that the United Auto Workers sold for a quarter as part of its successful organizing drive at the company. There will be no similar campaign under the current IBT leadership, so get a copy of Allen’s book for yourself and then pass it on to a UPS driver the next time you get a delivery. She is part of the most organized section of what is possibly the most important industry in 21st-century capitalism, and the outcome of her story will have a lot to do with what our world looks like on the other side of this pandemic.

This review was originally published in The Indypendent.