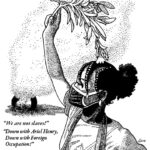 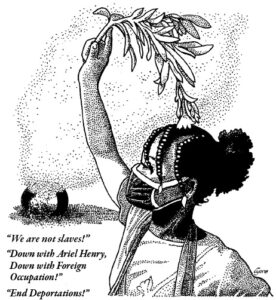 On August 22, 2022, coinciding with the 231st anniversary of the start of the Haitian Revolution, the most recent wave of popular mobilizations against the pro-imperialist regime of the Haitian Baldhead Party (PHTK) began. High inflation—29 percent annualized as of June—and economic contraction were worsened by the quasi paralysis of the country for more than three months. The government increased the discontent in September, in the midst of the protests, by doubling fuel prices according to IMF recommendations. The worsening of the economic crisis was compounded by the widespread rejection of the de facto government; meanwhile organized crime gangs occupy the vacuum left by the collapse of the state. The OAS Secretary General and the UN Security Council then began promoting a new military occupation of Haiti as a response, but there was no agreement among the different imperialist actors and their allies on how to carry it out.

The ruling PHTK is the child of imperialist occupation. It was formed in 2012, a year after the coming to power of Michel Martelly, a singer linked to the residues of the Duvalierist dictatorship overthrown in 1986. Both Martelly and his successor Jovenel Moïse, the assassinated former president, were declared winners in fraudulent elections. Popular resistance against the PHTK has been significant since the social uprising of July 6, 2018, against the first attempt to increase fuel prices, which forced Moïse to back down. In the following months, a powerful movement was launched demanding justice and the recovery of funds stolen from the Petrocaribe fund, a financing mechanism provided to the Haitian regime by the Venezuelan government.

In 2019, general elections were due but Moïse refused to organize them, instead dissolving the lower house of parliament, and dismissing the mayors and most of the senators, by claiming that the mandates of those offices had expired. However, he continued to govern in spite of his own mandate having also expired. In the face of mobilizations against his illegitimate and illegal government, he became increasingly isolated. He broke with his political mentor, ex-president Martelly, and tried to unilaterally impose a constitutional reform to concentrate more power in the presidency and to favor the granting of mining concessions to transnational companies. One of his last administrative acts before being assassinated was to appoint Ariel Henry as interim prime minister. Henry, however, was not able to formally take office, as Claude Joseph was serving as prime minister at the time.

The Core Group, a sort of colonial supervising body formed by representatives in Haiti of the U.S., Canadian, French, German, Spanish, and Brazilian governments, as well as the OAS and UN offices, decided the succession dispute in Henry’s favor. During the few weeks that Joseph was the head of state, he requested a military invasion from the United States. Newly elected President Biden did not grant this request.

The chaos caused by U.S. imperialism in Haiti after three decades of intermittent occupations through the UN, in addition to U.S. defeats in Afghanistan and Iraq, generated hesitation among imperialists regarding a new invasion. The Washington Post published an editorial in favor of invading Haiti after the assassination of Moïse, while a different line was expressed by the U.S. special envoy for Haiti, Daniel Foote, when he resigned his post in September 2021. Foote criticized Biden’s policy of massively deporting Haitian immigrants back to Haiti and vindicated the effort for a national unity front around the so-called Montana Accord, signed by a wide range of political and social organizations, including political expressions of the bourgeoisie opposed to the PHTK.

During the trials against some of the individuals involved in Moïse’s assassination in the United States, prosecutors asked courts to keep the link between the accused and U.S. agencies such as the CIA and the DEA secret. Martelly has long lived in Florida without being bothered, and the businessmen from Venezuela and Ecuador who hired Colombian mercenaries to carry out the assassination have not been arrested either. At the very least, there would later be indications the U.S. government let the assassination happen, or that it protected some of the perpetrators, because it considered coup rule favorable to its interests. Canada’s government, however, did announce sanctions on November 20 against Martelly and two former prime ministers, Laurent Lamothe and Jean Henry Ceant, for cooperating with criminal gangs.

In the midst of the economic, political, and social crisis, the G9 federation of gangs emerged in mid-2020. The government and the UN Office for Haiti (BINUH) hoped it would enable a lasting pax mafiosa. In reality, the criminal federation consolidated its positions and went on to dispute territories with other gangs outside its alliance, scaling up the violence. These armed confrontations have left thousands of people displaced in Port-au-Prince. Ironically, the G9 gangs, whose strength is a by-product of the decomposition of a regime that imperialism itself has been sustaining, are now the alibi used by the UN Security Council to consider a new invasion to repress the popular protests in Haiti and keep the country under foreign tutelage.

The Threat of Military Occupation

Sadly, the Haitian people cannot count on any government for support. The Mexican government of López Obrador has sponsored several Security Council resolutions on Haiti, together with the U.S. government. Between 2004 and 2017, thousands of troops of the UN Mission for the Stabilization of Haiti (Minustah) were provided by several self-styled progressive Latin American governments, headed by Brazil’s Lula. The main beneficiary of the $2 billion embezzled from the Petrocaribe fund, provided by the Venezuelan government, was the PHTK regime. The governments of Russia and China voted in July 2022 to renew BINUH’s mandate in spite of calls by the Haitian left for them to veto the renewal.

With Ariel Henry’s October 7 request for a foreign military occupation to fight against the gangs, the threat was imminent. UN Secretary General Antonio Guterres proposed that the Security Council send a “rapid action force” with military personnel from one or more countries but not blue helmets. The U.S. and Canadian governments promoted the option of using troops from Caribbean Community countries. If this option becomes a reality, they would fulfill a role similar to that of the South American center-left governments in the Minustah, which was also originally envisioned as a short-term endeavor.

The official alibi is to combat gangs, but the hypocrisy could not be greater. A good part of the fortune plundered from the Haitian people, from the Duvalier dictatorship to the PHTK, is found in properties and bank accounts in North America and Europe. Imperialism gets along well with the biggest gangsters.

In 2022, the popular struggle regained its strength. In January and February, large strikes by workers in the textile industry of the SONAPI free trade zone in the capital overcame repression and achieved an increase in the minimum wage, albeit insufficient. How will the current stalemate be broken, in which neither those at the top nor at the bottom manage to take the reins of the country? The North American, Latin American, and Caribbean left have the responsibility of mobilizing solidarity with the urgent struggles of the workers’ and popular organizations of Haiti, such as resistance to any imperialist military aggression, self-defense against police repression and the violence of the gangs, the building of international support networks, and the adoption of a transitional program for a way out of the crisis.

Revolutionaries in the region must support the demand that the Core Group, the BINUH, and their puppet Ariel Henry leave. Reparations must be paid by the United States, France, and the UN for the successive invasions, occupations, extortions, fraudulent debts, and crimes perpetrated against the Haitian people. Foreign debt must be canceled, and it’s essential to repatriate the fortunes looted from the Petrocaribe fund. Governments of the region should respect the rights of Haitian migrants and stop massive deportations.

The heroic Haitian working people are fighting to take their destiny into their own hands. As the comrades of the Socialist Movement of Haitian Workers put it, “Only the convergence of the workers’ and popular forces can close the road to the imperialist attempts to serve the same dish in different packaging!”