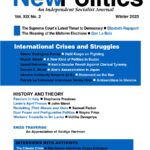 As we enter 2023, the world is no less chaotic and crisis-ridden than it has been over the last three COVID pandemic years. After 6.4 million deaths worldwide and more than a million in the United States, COVID remains a serious threat. Thanks to vaccinations and treatments, in some countries there is a falling death rate, though millions are still unvaccinated and the danger of new, resistant variants remains.

The climate crisis continues unabated. At the COP27 conference held in Egypt, the major polluters failed to take action to reduce global warming. The conference did adopt a “loss and damage” fund for developing countries that contribute relatively little to climate change but are disproportionately affected by it, but there is no guarantee that the wealthy countries will fund it adequately. In this issue, in a section called Interviews with Activists, Phil Gasper interviews Alyssa Battistoni on the climate crisis. Our Champion of Justice, Egyptian Alaa Abd El-Fattah, a leader of the Arab Spring, then a political prisoner, began a hunger strike in April 2022, and a water strike in November to coincide with COP27.

Russia’s war on Ukraine, now a year old, continues to grind on, with thousands dead, millions displaced, and horrendous destruction. The possibility of a European war and the use of nuclear weapons remains a danger. Russia continues to carry out large-scale bombing against civilian infrastructure, leaving millions without heat, electricity, or water in the winter. European nations cut off from Russian fuel face rising prices, energy shortages, and blackouts. The war has divided the left around the world and in the United States between those who, like us, support Ukraine’s right to defend itself and procure arms to do so, and those who call for an immediate ceasefire in place, a position that would mean a Russian victory. In this issue, we publish a statement on Ukraine by the newly formed Ukraine Solidarity Network (U.S.) and an interview with historian Serhiy Hirik on the role of antisemitism in Ukraine.

Ukraine is not the only humanitarian catastrophe. At the moment, while there is a truce between Ethiopia and Tigray, one cannot count on peace. And in Sudan, since the coup of October 2021, more than 14 million are in hunger, but there continues to be hope among grassroots activists, a topic taken up in our pages by Muzan Alneel.

Fascism has re-emerged in Europe. In Germany, neo-Nazis planned to attack the legislature and overthrow the government. (Sound familiar?) In Italy the far right has come to power electorally. In this issue Stefanie Prezioso analyzes the persistence of Fascism in Italy: “A Century After the March on Rome: Fascism from Past to Present and Back.”

In the Western Hemisphere struggles against authoritarian governments and criminal activity continue. In Haiti popular resistance to political corruption and gang violence continues under the threat of another possible foreign—U.S. or U.N.—intervention. Simón Rodríguez Porras takes up all of this in “Haiti: A Crisis Caused by Imperialism and Its Oligarchic Cronies.” In Guatemala, elite families and part of the political class continue their assault on justice and democracy. In recent years, scores of land defenders, activists, journalists, judges, and anti-corruption prosecutors have been forced into exile or imprisoned. Dawn Marie Paley traveled to Guatemala to speak with Isabel Solís, a Mayan activist involved in struggles for land rights.

At the same time, we see mass popular protests in Iran and China. In Iran since September, there have been huge protests triggered by the murder of a young woman by the morality police. Saeed Rahnema writes about this in “Iran: Secular Revolt Against Clerical Tyranny.” In China deaths in a building fire in Xinjiang’s capital of Urumqi blamed on rigid COVID restrictions triggered national demonstrations against the government’s zero-COVID policy. Some protestors called for freedom and democracy, Xi Jinping’s resignation, and an end to the Communist dictatorship. China has quashed the protests and loosened its restrictions, but without a high-quality vaccine and with many unvaccinated COVID cases are exploding.

There have also been important developments in another Asian country, covered in this issue by Donald C. Wood in his “Abenomics and the Liberal Democratic Party: Bad Politics for Japan.”

In the United States, the Democrats claimed a victory in stopping a threatened “red wave,” kept control of the Senate, and lost only a few sets in the House, though enough to put them in the minority. Yet Donald Trump remains a force in the Republican Party, Trumpist white nationalists have won elections to Congress and to state offices, and the far right and its armed militias continue to thrive. Dan La Botz analyzes the election in detail, arguing that we are “Not Back to Normal.”

Faced with a possible railway strike in November, Joe Biden, who promised to be the most labor-friendly president in history, invoked the Railway Labor Act, persuaded Congress to prohibit a strike, and imposed a contract without the workers’ central demand, paid sick days. A separate bill giving railroad workers seven paid sick days also passed in the House, though as expected died in the Senate. Five of six members of “The Squad” of progressive and supposedly socialist Democrats voted to impose the contract. Three of those are DSA members: Alexandria Ocasio Cortez, Cori Bush, and Jamaal Bowman. This has led to a debate in DSA, though the organization is unlikely to abandon its electoral strategy of working in the Democratic Party.

In another article focusing on the domestic scene, Elizabeth Rappaport discusses the deeply troubling implications of Moore v. Harper, a case just heard before the Supreme Court.

In this issue we have a section on history and theory. John Marot writes on “Old Bolshevism, New Bolshevism, and Lenin’s April Theses.” Sam Farber reflects on Trotsky’s Their Morals and Ours. Wayne Price discusses “Conceptions of Dual Power and Prefigurative Politics.” Uditha Devapriya explores the little-known time “When Sri Lanka operated Workers’ Councils.” We are also pleased to be able to publish “An Appreciation of Saidiya Hartman,” an excerpt from Enzo Traverso’s new book, Singular Pasts.

Staughton Lynd, the civil rights, anti-war, and labor activist died in November. We publish a reflection by Dan La Botz and reprint a review by Lynd on the labor movement. 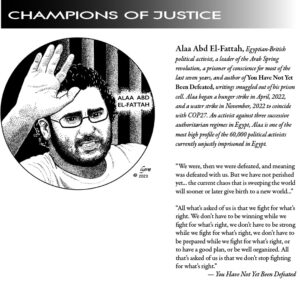