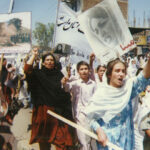 Presentation to the Marxist Feminism Conference 2021, Panel on Middle Eastern and North African Women’s Struggles, the #Me Too Movement, and Their Challenges to Marxist Feminism. Translation by Frieda Afary.

I am Kobra Sultani from Afghanistan, a country that the international community has declared to be the worst place for women. I am glad to be part of this gathering today.

Afghanistan was declared the worst place for women at a time when a so-called bourgeois democracy ruled the country. Today however, Afghanistan has sadly returned to the Stone Age, and women have been pushed out of all social activities and denied their most basic individual and social rights.

Under the Taliban, girls are not allowed an education beyond the fifth grade. They do not have the right to work in offices or to engage in sports or in cultural work. They are not allowed to leave the house without a male relative. The compulsory hijab or burqa has been forced on us, and even the color of the burqa is chosen by the Taliban. These oppressive rules are being imposed on women at a time when the people are in a state of shock and suffering from unimaginable poverty. Families who have sold their property and basic livelihood for the sake of a meal resort to selling their children and mostly little girls. Women who have lost their husband to the Covid-19 pandemic or war or terrorist attacks by Islamic jihadist groups, and have become the sole breadwinner for their family, are facing multiple problems. After selling their meager resources, they do hard and onerous labor, peddle on the street, beg, or work as domestic laborers for wealthy people. In addition to the stress of forced labor, these destitute women also have to endure the lashes and rifle butts of the Taliban on their face, chest, neck, and side because the Taliban ideologically oppose women’s work and social activity outside the home.

But women in Afghanistan have not complied with the repressive rule of the Taliban. They have gone out into the streets in protest, screaming that they want freedom and representing the voices of the destitute of Afghanistan. These protests are spontaneous and arise from the depth of poverty and deprivation that these women suffer. These protests continue to face violence and beatings from the Taliban, who blame women for the international community’s refusal to give diplomatic recognition to their rule. The Taliban dismiss women’s protests and label them illegal. They have responded with intense violence not only to the protesters but also to the reporters who have tried to cover the women’s protests for various global media. In the most recent protests in Kabul, the Taliban shot women and killed one. In the state of Badakhshan and cities of Bamiyan and Mazar-i-Sharif, they have abducted some women protesters. Afghan women’s protests have also spread beyond the borders of Afghanistan where refugee and migrant women have had gatherings and protests to tell the freedom-seeking people of the world about the realities that Afghan women are forced to endure in the twenty-first century as a result of the shameful deals of corrupt capitalist rulers. The Taliban have been organizing targeted assassinations to silence women. Just a few days ago, four women from women’s rights and civil society groups in Mazar-i Sharif were executed by firing squad. Their families have not spoken out from fear of the Taliban and have gone into hiding.

Afghanistan’s history has always been about political changes and upheavals. This country has rarely experienced any harmony or peace. This might be one of the reasons for the scant attention given to creating and developing a women’s movement. Thus, today women’s protests do not appear as a coherent, organized, and persistent movement with specific demands and a program. They are consequently less effective.

In the 1960s and early 1970s, women entered the Afghan left. This left consisted of the pro-USSR or Maoist parties. The leftist women’s movement was very active in Kabul University. At the same time, some women became members of the parliament. The problem was that the women’s movement remained urban and was not able to reach out to the masses of women in rural areas.

At the time of the rule of the pro-Soviet People’s Democratic Party, there were some progressive reforms including the prohibition of child marriage, a reduction in the amount of dowry required of a woman’s family, a literacy campaign, land reform, and other reforms. However, the glaring errors of the leadership, the use of force, dictatorship, and the severe restrictions placed on intellectuals and dissidents led to deep popular dissatisfaction, a turn away from this party and the rise and growth of political Islam.

The Afghan left was not successful in promoting women’s emancipation. Even though it claimed to be for women’s liberation, its paradigm for the role of women was still a traditional one. It would be more accurate to characterize the Afghan traditional left as bourgeois nationalist, because its parties were essentially populist and reconciled themselves with religion as the beliefs of the masses. The traditional Afghan left ignored the reactionary nature of the compulsory hijab and basically justified Islamic sharia laws concerning divorce, custody of children, inheritance, and choice of partner in marriage.

After the withdrawal of Soviet forces, following ten years of Russian imperialist military occupation from 1979 to 1989, and after the overthrow of Mohammad Najibullah Ahmadzai, the last leader of the Democratic People’s Party, the Islamic fundamentalist mujahideen took over the reins of power. In this period we saw retrogression in women’s rights: The hijab was made compulsory, limitations were placed on women in universities and government offices. Laws were further Islamicized, and clerics regained control over people’s lives.

All of you are aware of the rule of the Taliban from 1996 to 2001 and how they treated women. The goal of the Islamic Emirate of the Taliban was to deprive women of their political, social, economic, cultural, and most basic human rights. Thus, we saw women prohibited from attending school or working outside the home. Women were flogged and stoned in public. They were prevented from leaving the house without a male relative, denied health care and educational services or any presence in the cultural world.

During the years of the U.S. imperialist occupation and the rule of the U.S.-installed governments of Hamid Karzai and Ashraf Ghani from 2004 to 2021, under the name of democracy, we saw the reproduction of patriarchy and masculinity through many means such as religion, culture, tradition, and the judiciary. Thus, it was not difficult to harm and insult women. Although stoning became illegal and some laws in defense of women existed in the new constitution, women were still stoned based on edicts from clerics. Every extremist Islamist group could still flog women or take revenge or promote forced marriage and child marriage. [Women] were not even safe in their own family, much less when working outside the home. Women who were not aware of their rights or who were sole breadwinners for their family had to comply with the sexual demands of their boss. In effect, the rulers of Afghanistan were ideologically in agreement with the religious extremists and misogynist clerics.

Most of the women who were among the rulers of the bourgeois democracy were placed in key posts as tokens on the basis of previously arranged ethnic quotas. They were obedient and determined to protect their rank and status. At the same time, they were used as a means to give the government the image of promoting women’s liberation and to counter any voice of protest from human rights groups who opposed the institutional violence and prejudices against women. These token women damaged and derailed the actual struggles of women. They participated in the peace negotiations with the Taliban. They left Afghanistan at the first opportunity on U.S. planes and abandoned over 15 million women and girls to the criminal Taliban, which considers women to be an evil force and defines a woman’s role as staying in the home, having children, and providing services for her husband.

Many analysts have asked why the United States was willing to make a deal with the Taliban. Some have pointed to the corruption and weak administration of the Afghan national government and the reluctance of Afghan soldiers and their lack of morale. We can say that the victory of the Taliban was to a small extent due to the lack of resistance from hungry soldiers. However, to a large extent, it was due to the continuing undercover negotiations between Washington and the Taliban. The U.S. peace negotiations with the Taliban completely ignored the Afghan people. President Biden himself said that the United States had not occupied Afghanistan as a nation-building mission, emphasized it had spent a trillion dollars on a totally corrupt and inefficient government in Kabul, and declared that he would not pay for the rights of Afghan women with the lives of U.S. soldiers. Thus, after twenty years of U.S. imperialist occupation that involved the bombing and direct killing of more than 65,000 innocent civilians, the U.S. peace with the Taliban meant the continuation of the war for the people of Afghanistan.

The U.S. withdrawal agreement with the Taliban contained two stipulations: First, the Taliban would not harm U.S. interests and American soldiers. Second, the Taliban would not allow Al-Qaeda and other terrorist groups to use Afghan territory to threaten the United States. Washington also forced the Afghan government to release five thousand imprisoned Taliban fighters.

What shocked the Afghan people more than anything was that their fate had been decided in these undercover negotiations. Once the people realized what had happened, they were overtaken by fear. Hence we saw tragic scenes such as the effort of some to hang on to planes taking off from the Kabul airport runway. Some fled the country and some have stayed. As I stated earlier, despite all of these hardships, women in Afghanistan refuse to be bystanders to the destruction of their future. They have appeared on the streets and face the repression.

What do Afghan women demand from freedom-seeking women around the world?

Support for Afghan women has to be for the purpose of changing their lives. However, the help from the international community today is not even meant to reduce the violence and repression of the Taliban.

Rule by political Islam and the coming to power of jihadist groups is a serious threat to all progressive forces and especially women. Considering that misogyny is deeply ingrained in religion, confronting religion itself should be a priority for women. Focusing on modernizing or reforming religious laws will be a waste of our energy. All women around the world suffer from gender oppression. Women who live in war zones are being crushed by the armies of ignorance, religion, and capitalism. Women’s emancipation is only possible if we get to the roots of the oppression of women.

Women workers and toilers who try to stand up and express their identity as human beings in a class society cannot separate their participation in the class struggle from the struggle against the compulsory hijab, for the right to choose whom they marry, for the right to custody of their children, and for the right to the most basic personal freedoms. These struggles are not easy but will be easier with solidarity from freedom-seeking women around the globe.

Thank you for listening.