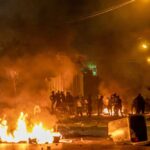 George Floyd was cold-bloodedly, albeit unintentionally, murdered in the course of “felony assault” in Minneapolis on May 25, almost exactly a year ago. The next day, once the news and video of his murder had gone viral, the Minneapolis-Saint Paul area witnessed days of violent rioting and looting, resulting in “the second-most destructive period of local unrest in United States history, after the 1992 Los Angeles riots.”

On 28 May, Minneapolis Mayor Jacob Frey told reporters that the protesters’ anger is “not only understandable, it’s right.” He added: “What we’ve seen over the last two days … is the result of so much built-up anger and sadness … that has been ingrained in our black community, not just because of five minutes of horror, but 400 years.” The riots led to the deployment of the National Guard in the Minneapolis-Saint Paul area. “It is time to rebuild. Rebuild the city, rebuild our justice system…. George Floyd’s death should lead to justice and systemic change, not more death and destruction”, said Minnesota Governor Tim Walz who ordered the deployment.

Imagine that the Minneapolis Mayor had compared the Black people’s riots to the Nazis’ 1938 Kristallnacht pogrom and that the Minnesota Governor too, instead of acknowledging the need for justice and systemic change, had described the riots as “pogroms” perpetrated by “an incited and bloodthirsty Black mob”. They would have been widely, vigorously, and rightly condemned for drawing outrageous defamatory analogies and making plainly racist statements, as well as for being completely blind to the reality of systemic racism and injustice in their city and state. Only white supremacist fans of Donald Trump would have enthusiastically condoned their statements.

Consider now the recent flare-up of violence within the Israeli state in its pre-1967 borders on the backdrop of the mass protests in Jerusalem, followed by the conflagration between Gaza and Israel. In the city of Lod, Palestinian citizens of Israel, who constitute one third of the city’s inhabitants, staged protests like other “Arab Israelis” did in solidarity with their fellow Palestinians of Jerusalem. The latter were confronted by a new war crime planned by fanatical Zionist settlers wanting to evict eight Palestinian families from the East Jerusalem neighbourhood of Sheikh Jarrah in order to replace them. Musa Hasuna, a 30-year-old Palestinian resident of Lod, was shot dead on Monday May 10 by a Jewish resident: by accident said the latter’s Jewish neighbours, “at point-blank” said the victim’s father.

His funerals the next day turned into a riot ignited by clashes between Palestinians and the police—riots that were no different from those of Minneapolis, on a much smaller scale. What was the reaction of Israeli authorities? “This is Kristallnacht in Lod,” stated Lod Mayor Yair Revivo on television. Israeli President Reuven Rivlin went further, declaring: “The sight of the pogrom in Lod and the disturbances across the country by an incited and bloodthirsty Arab mob, injuring people, damaging property and even attacking sacred Jewish spaces is unforgiveable.”

This huge difference between official reactions to Black riots in the United States and to Arab riots in Israel is very telling about the long distance that separates, on the one hand, the increasing acknowledgement by American society and state of the legacy of anti-Black racism on which they have been historically built and the mending process in which they have been engaged for a few decades, with a lot more still needing to be done, and on the other hand, the deliberate blindness of Jewish Israeli society and State to the legacy of anti-Arab racism on which they have been historically built. Not only are Israeli society and state in denial of this legacy, but they are aggravating it by the day as Jewish colonialism in Palestine, unlike white colonialism in North America, is itself an ongoing process.

Thus, racism is an intrinsic built-in feature of the Israeli state, as French scholar Maxime Rodinson explained on the background of the 1967 Six-Day War: “Wanting to create a purely Jewish, or predominantly Jewish, state in an Arab Palestine in the twentieth century could not help but lead to a colonial-type situation and to the development (completely normal sociologically speaking) of a racist state of mind, and in the final analysis to a military confrontation between the two ethnic groups.”

It is this same truth that Israeli writer David Grossman acknowledged, a few months after losing his son in Israel’s 2006 war on Lebanon, at the memorial ceremony for Yitzhak Rabin held on November 4 of that year, when he lamented

“Israel’s quick descent into the heartless, essentially brutal treatment of its poor and suffering. This indifference to the fate of the hungry, the elderly, the sick and the disabled, all those who are weak, this equanimity of the State of Israel in the face of human trafficking or the appalling employment conditions of our foreign workers, which border on slavery, to the deeply ingrained institutionalised racism against the Arab minority.”

And yet, Israel’s official discourse vehemently denies its “deeply ingrained institutionalized” anti-Arab racism and the settler-colonial nature of its state, although it is as blatant as could be and was even acknowledged by Zionism’s prominent historical figures. The ideological subterfuge for this denial has long been the invocation of Europe’s ghastly antisemitic legacy and the Holocaust, as if being the descendants of people who had fled persecution and massacre were a license to perpetrate the same against other people. All things considered, the structural conditions of violence in the Israeli context of Jewish supremacist domination make Jewish Israeli lynch mobs shouting “Death to the Arabs” incomparably more resemblant to pogroms than are Palestinian riots.

Israel’s colonial racism is at work in the persecution of its Palestinian citizens as it is at work in the ongoing colonial dispossession of the Palestinians of the limited stretches of land on which they still live in historical Palestine, and in the cruel bombing of Gaza in the name of an utterly disproportionate “self-defence” akin to the “exterminate-all-the-brutes” colonial tradition. And it is this very same racism that Israel’s supporters want to prevent academics from denouncing by libelling it as “antisemitic” according to a flawed definition that depicts claims that “the existence of a State of Israel is a racist endeavour” such as Rodinson’s above-quoted claim as “antisemitic.”