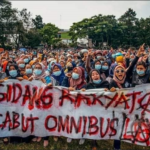 Over a million people have taken to the streets in Indonesia to protest a neoliberal law that would roll back labor protections, especially for working women, while also opening the road toward greater environmental destruction. Even Amnesty International, which usually concentrates on political rights rather than class issues, calls the new law “catastrophic.” The protests and strikes have covered most cities across this vast country, in one of the largest actions of its kind in decades. In the capital, Jakarta, police used the ban on public gatherings due to COVID-19 to arrest 800 people.

The widely opposed new law, passed by parliament on October 5, is very likely to be signed by President Joko Widodo, who has moved to the right in recent years after first being elected on a left-of-center basis in 2014. During and after his re-election in 2019, Widodo embraced his old rivals in the corporate and military elites. Most shockingly, he named as Defense Minister the man whom he defeated in both 2014 and 2019, Prabowo Subianto, an utterly reactionary former military officer involved in some of the worst repression under the Suharto dictatorship (1967-98). Although it was before Subianto’s time, that dictatorship was installed with crucial aid from the CIA, which also helped in the targeting and assassination of 500,000 leftists, working with both the military and Islamists.  (Mao Zedong’s role in misdirecting — in an utterly subjectivist manner — the massive Communist Party of Indonesia, which was destroyed by the repression of 1965-66, cannot be addressed here.) That repressive legacy, still in force today albeit in weakened form, means that socialist and Marxist discourse remains very restricted if not banned.

Widodo has also cozied up to big capital by allowing a major loosening of anti-corruption laws. In addition, he threw to the wolves a close colleague, the mayor of Jakarta, after he was attacked without proof for “blasphemy” by Muslim fundamentalists and eventually jailed. Widodo does on occasion continue to support more democratic politics, as when he refused to sign a 2019 law that would have severely cracked down individual freedoms by criminalizing sexual relations outside of marriage. Such a law would have criminalized the entire LGBTQ community. But he has mainly moved rightward, as seen in this outrageous new law. As veteran journalist Bruno Philip concludes concerning Widodo, “The ‘man of the people’ seems fully and well to have become the man of ‘business’” (“En Indonésie, une vague de colère contre une réforme ultralibérale,” Le Monde 10/9/20).

The 2020 law would give capital greater ability to cut workers’ pay, to move from a five to a six-day workweek, and to replace permanent workers with temporary ones with far fewer rights. Eligibility for unemployment compensation would be reduced from 32 to 19 months. The new measure would also go a long way toward eliminating minimum wage laws.

In addition to the above, working women would face further diminution of their rights, as paid maternity and menstrual leave would be eliminated. Ermawati, a leader of the Indonesia Metal Workers Federation, stated after speaking at a rally of striking cannery workers: “When they listened to my speech, all of them cried. The most burdensome is the omission of menstruation and maternity leave. As a woman, it also brings me to tears” (Dera Menra Sjabat and Richard C. Paddock, “Protests Erupt Across Indonesia as Workers Strike over Jobs Law, “NY Times 10/9/20).

The new law would also eliminate many environmental regulations, making logging even less restricted than it already is, and would remove regulatory obstacles for many other extractive industries, among them the mining of copper, gold, and tin.

The dominant classes and the political elites — as well as international capital — are justifying the law as a path out of mass unemployment. The recession precipitated by COVID-19 has raised the total number of officially unemployed from 7 to 13 million at a time when 3 million young people are entering the labor market every year.  They claim that outside investment will surge and get the economy moving upward.

While the political elites seem to be won over completely to neoliberalism, the large Muslim association, Nahdlatul Ulema, considered moderate rather than fundamentalist, has taken a markedly different stance. Its leader, Said Aqil Siroj, stated that the law would benefit “capitalists, investors, and conglomerates” and would run the danger of “destroying” the people of Indonesia (Bruno Philip, “En Indonésie,” cited above). The fact that a fairly conservative religious organization would be one of the most prominent voices opposing capitalism also illustrates the tragic legacy of the destruction of the left and its inability to rebuild up to now.

A new chapter in twenty-first century class struggle is being written in Indonesia today. The  importance of such a mass labor upheaval in the world’s fourth most populous country, one that also contains the world’s largest Muslim population, is obvious. But it also needs to be noted, here at a conceptual level, that these new struggles also show — not in academic theorizing but in the  lived experience of working people —  what should rightly be called the intersectionality of class, gender, and ecology in the twenty-first century battle against capitalism.