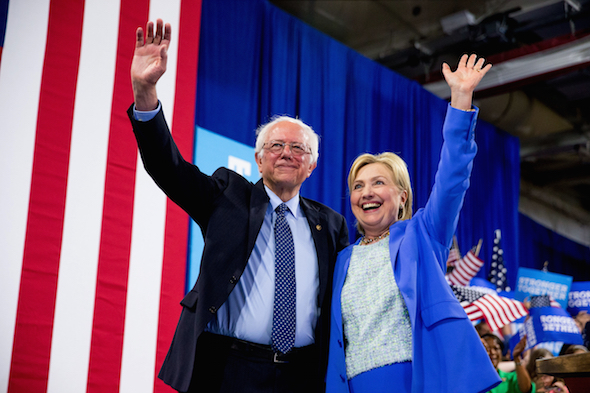 What an embarrassment for Bernie Sanders and those, myself included, who thought he would not descend so cravenly into the swamp of political sellout.

It is one thing to hold one’s nose and vote for Hillary Clinton as the lesser evil. It is quite another to suddenly absolve the Clintons and other top Democrats who have, as Sanders repeatedly pointed out during his campaign, contributed so much to the national crisis.

At one point in his otherwise uniformly obsequious endorsement speech, he sounded like the old populist Sanders, warning of the excesses of unregulated finance: “As a result of the greed, recklessness and illegal behavior on Wall Street, our economy was in the worst economic downturn since the Great Depression.”

As Sanders repeatedly pointed out during his campaign, it was former President Bill Clinton’s radical deregulation of Wall Street that legalized the new, gilded age of Wall Street theft. But now we have the new Sanders, reinvented as a Democratic Party hack, insisting that this unfettered greed was exclusively enabled by the Republican leadership of the economy under George W. Bush.

Sanders’ speech made no reference to breaking up the too-big-to-fail banks that packaged and marketed fraudulent collateralized debt obligations (CDOs) in the trillions of dollars to an unsuspecting world. It was Bill Clinton’s signature on the Commodity Futures Modernization Act that prevented the regulation of any of those suspect CDOs and the phony credit default swaps that pretended to insure them.

It was that legislation that initiated the Great Recession, as Sanders pointed out convincingly in his campaign debates with Hillary Clinton. But suddenly, the very sentences that he formerly used to attack her now are the basis of his endorsement: “This election is about the grotesque level of income and wealth inequality that currently exists, the worst it has been since 1928. Hillary Clinton knows that something is very wrong when the very rich become richer, while many others are working longer hours for lower wages. She knows that it is absurd that middle-class Americans are paying an effective tax rate higher than hedge fund millionaires, and that there are corporations in this country making billions in profit while they pay no federal income tax in a given year because of loopholes their lobbyists created.”

Really, Bernie, is that something you whispered in her ear during the hug? Or did she glean that wisdom from John Podesta, her campaign manager, who was once one of those lobbyists, or her son-in-law, Marc Mezvinsky, who was set up in the hedge fund business by Goldman Sachs CEO Lloyd Blankfein, who also paid Hillary so handsomely for her speeches?

Did Bernie suddenly forget all of that Wall Street money that funded Hillary’s campaign? Or is the prospect of Donald Trump as president so staggering that all restraints of fact and logic need now be abandoned?

Do the bipartisan policies of financial deregulation, lousy trade agreements and tax loopholes that defined the Clinton presidency have nothing to do with the massive resentment in this country over a rigged economy that has fueled both the Sanders and Trump campaigns? Or was the electoral revolt against the establishment of both political parties merely the achievement of particularly effective populists of the right and left?

That would now seem to be the Sanders message. The progressive protest he led was not much of a political revolution if he believes the Democratic leadership that has held power for two-thirds of the past 24 years could now so easily accommodate it. What he has bought into is that the revolt on the Republican side is so irrationally hardcore that Hillary Clinton is now our only bulwark against an imminent variant of American fascist rule.

That is the argument that now captivates the mass media, along with the rest of the establishment, and because Trump plays the devil part so well, many voters will feel they have no choice but to heed Bernie’s siren song.

However, if it is the problems that create the demagogues, as historical example would strongly suggest, then it ill behooves Sanders to uncritically fall in line behind the lesser evil. Four more years of unchecked Wall Street greed will leave us with an even more alienated populace, on which scapegoating buzzards like Trump can feast.

Critical thinking in this new political season will have to come from alternative candidates, such as the Green Party’s Jill Stein and Libertarian Gary Johnson.

“I have known Hillary Clinton for 25 years,” the new Bernie gushes. “I remember her as a great first lady who broke precedent in terms of the role that a first lady was supposed to play, as she helped lead the fight for universal health care. I served with her in the United States Senate and know her as a fierce advocate for the rights of children.”

A regular Eleanor Roosevelt, except that as first lady, Hillary Clinton turned health care over to the insurance companies and supported her husband’s so-called “welfare reform” that gutted the federal Aid to Families with Dependent Children program.

Bernie, stop with the fawning. It’s not becoming.