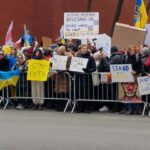 The Democratic Socialists of America, the largest socialist organization in the United States, with about 75,000 members (down from 94,000) in more than 200 chapters, has been unable to play any significant role regarding Russia’s war on Ukraine. Politically divided on the war, unable and uninterested in organizing debates on the issue in the organization, it has made no substantive analysis, published virtually no literature on the subject, and has neither organized nor participated in the few demonstrations about the war.

The short statements DSA has produced over the past nearly three months of the war have condemned the Russian invasion but placed almost equal responsibility for the war on NATO. DSA has not called for support for Ukraine nor for its victory in the war. Instead, it has said, very abstractly, that it stands with the working classes of both Ukraine and Russia and with the anti-war protestors in both countries and around the world. This position would place DSA in the pacifist anti-war camp that opposes giving weapons to Ukraine and calls for diplomacy, but it has played no important part in that small movement. DSA has not joined in the large Ukrainian American protests in several cities.

Why is DSA in this anomalous position: A political organization with no useful position on the central foreign policy question of the day? When Senator Bernie Sanders ran for president in 2015 as a democratic socialist, he inspired hundreds of thousands of young people, tens of thousands of whom joined DSA. Becoming political, some DSAers, wanting to be anti-imperialist, were attracted to campist ideas, the view that the United States is the main or only imperialist power and that leftists should support states that oppose it—such as Iran, Syria, China, and Russia, Venezuela and Nicaragua, even if they were authoritarian.

Having grown to tens of thousands of members, DSA also became a target for infiltration by other left groups, from the Communist Party USA, to several orthodox Trotskyist organizations, and others. The Party of Socialism and Liberation, for example, brought Stalinist ideas into DSA. PSL looks back with regret on the fall of the Soviet Union, it expresses support for North Korea, and in the current Russian war on Ukraine, PSL leans toward Russia. Several such campists or Stalinists won election to DSA’s top leadership body, the National Political Committee, where they faced opposition from an equal number of internationalists, making it impossible for DSA to pass a meaningful position on the Russian war on Ukraine.

Unfortunately, DSA has neither the political will nor the ability to organize political debates on the Russian war on Ukraine, so discussion then tends to take place in left journals, through the DSA caucuses’ publications or on social media. I and other DSA comrades have written articles arguing for DSA to support Ukraine. A couple of caucuses have published articles supporting Ukraine or sponsored debates in their pages. Others see this becoming a proxy war. On social media—such as DSA’s own discussion board, Facebook, Twitter, and others—the debates are snarky at best and often vicious. It has been suggested that those who criticize China, Russia, Syria, or support Ukraine are State Department agents. Some DSA members have called for “ice-picking” other DSA members who oppose campism. (Ice-picking is an allusion to the murder of Leon Trotsky.)

A few DSA branches have sponsored Zoom webinars with Ukrainian speakers, including people invited from Sotsіalniy Rukh or Social Movement (SR), a democratic socialist organization in Ukraine that opposes Zelensky’s neoliberal policies even while joining the Ukrainian territorial defense battalions to fight Vladimir Putin’s Russian invasion. We in DSA will continue to push the organization to hold discussions and debates on the war and to support Ukraine and the Ukrainian left in every way possible.