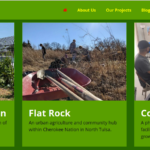 Since 2020, Cooperation Tulsa has been planting seeds of radical democracy in Oklahoma based on Indigenous values and social ecology. Aside from running a community center and gardening projects, they helped start the Symbiosis federation of horizontally-structured organizations aiming to “confront the present system while creating the future that will replace it.” I spoke with Cooperation Tulsa’s member Daniel Baryon and began by asking about his group’s relationship with Mississippi’s Cooperation Jackson, a Black-led network of worker-run cooperatives established in 2014. -DF

Cooperation Tulsa formed during the George Floyd uprisings. At first we were not in contact with Cooperation Jackson, however that changed after an event called Symbiosis Summer, where several of our members traveled to Jackson to help CJ with a few of their projects that required physical labor. There are now open channels between us.

Describe the local responses to your community center and farming and gardening projects.

They have been overwhelmingly positive, if somewhat limited in breadth. That is to say, anywhere there is coverage of our projects, people are very excited about it both in the revolutionary milieu and among average people. We have seen how successful a revolutionary prefigurative program is through action. Many of us are long-time organizers and have witnessed the failure of other methods and we can see the enthusiasm Cooperation Tulsa generates. One of the most significant reasons it generates enthusiasm is because it is a demonstration of horizontal values. Whereas other methods place revolutionary organizers outside of the people as superior vanguardists, this method helps THEM develop their power and then trusts them to use it. We wish to act as counsel and catalyst, not as controller of the autonomy of the people.

What foods are Cooperation Tulsa growing, and how do the methods contribute to food sovereignty and ecological sustainability?

So we just established our gardens really in the last year or so. We plan to plant summer squash, summer crookneck, Kentucky wonder bean, muncher cucumber, tendergreen cucumber, short & sweet carrot, half long carrot, baxters bush cherry tomato, French breakfast radish, cherry bell radish, and a few tomatillos. We have already planted baby kale, spinach, lettuce, radish, and lamb’s quarters. In the future, we would like to emphasize native species and permaculture, as well as hopefully establishing a food forest. We view our purpose as cultivators as restoring the harmony of the ecosystem and creating food sustainability for the people.

What is the connection between the organization’s horizontal structure and vision of municipal democracy?

The phrase ‘municipal democracy’ can mean a great number of things. For us, insofar as we are said to practice it, it is the attempt to democratize the bodies we create and to widen the scope of democratization at the local level to the best of our abilities. Our organization serves as a catalyst to develop democratic bodies which can govern and direct themselves, while also cooperating with the social ecological vision of Cooperation Tulsa.

Why is it significant that Cooperation Tulsa has Indigenous guidance and collaborates with Cherokee Nation?

It is significant for several reasons. First of all, Oklahoma is a particularly important site of struggle for Indigenous land sovereignty. Not only was it the destination of many genocidal relocations, it is now one of the most significant examples of tribal autonomy in the US, especially after the McGirt v. Oklahoma ruling. It is also important in that it is a very diverse organization, consisting of both Native American and white organizers. It is a site for coordination on common struggles on that front. We also believe that the social ecological viewpoint of Bookchin has a great deal in common with Indigenous values and that this has been one of the contributors to its success as a coordinating body as well as the success of Bookchin abroad in Indigenous struggles for autonomy. As for our collaboration with the Cherokee Nation, this is tentative. We wish to discover a lane of action wherein the entities we develop and the Cherokee Nation can collaborate without entangling either with the other too thoroughly. That is to say, we want to develop tribal autonomy and also the autonomy of the masses.

How did the pandemic affect the group’s organizing?

It definitely made things harder. As the pandemic escalated, it forced us to use digital methods more often, which is often much harder for mediating disputes and discussing complicated topics. It has also meant that we have had to develop mechanisms to reach out to the people digitally instead of utilizing social insertion, as most of our members prefer. This has had ups and downs. The up is that it makes our organization more accessible! The downside is that it hurts community and group engagement. We are still trying to balance all these concerns as we proceed.

Why did y’all decide to join the Symbiosis confederation, and how has that collaboration been?

Well first, it must be said, that one of our founding members, Roberto Mendoza, helped draft the points of unity for Symbiosis at their Chicago plenary. His focus on Indigenous values as well as my own focus on the ideas of Murray Bookchin, made this a natural fit. We created the group with a conscious intention to become part of the Symbiosis network and have found the relationship with the federation very productive. Also, we were very inspired by the work of Cooperation Jackson and the projects in Rojava and the philosophy of Neo-Zapatismo, all of which we see as reproductive of the values of Symbiosis.

How can people support Cooperation Tulsa, and is there anything else you want to share?

So many ways! If you are here in town and you are a revolutionary anarchist, libertarian socialist, or communalist of some kind, we invite you to apply to become a member. We would be happy to invite you to our Discord server if this is an easy way for you to become more acquainted with the group. Or you may want to attend one of the regular events we hold! Follow our social media to keep yourself up to date.

Lastly, we are in the middle of a concerted fundraising effort in order to cover overhead for our community space. If we do not meet a goal of around $1800/month of income in the next few months, we may lose the space, which would be a severe blow to our program. The space is used for community meetings, it is a makerspace, it hosts a free store which clothes and feeds people, it hosts movie nights, free dinners every Friday, even meetings and teach-ins among our own group and for other local organizations! This is not even half of how it is used; it is implemental in all our other projects. I ask that, if you can spare any amount that you go become a recurring contributor at our Open Collective. Your contribution, no matter how small, is meaningful and contributes to a real, substantive dual power program in Tulsa, Oklahoma.