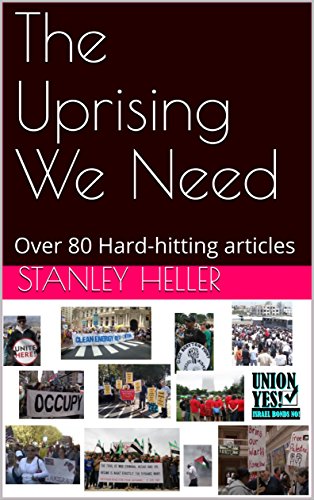 From Mondoweiss to The Nation to Truthdig to Counterpunch, the articles—a good balance of analysis and polemic—in these various venues cover everything from Palestine to movies to nuclear power to the unfortunate sections of the left that threw their weight behind the murderous regime of Bashar al-Assad. This latter subject is perhaps what was most edifying for this reader because I was once the captive of that kind of enemy-of-my-enemy distortion. That Heller was not captured by it speaks well for him, because those leftists who threw in with Assadists have crippled their own credibility and that of the left for anyone—including Syrians—who actually understood what happened during the Syrian catastrophe. Almost equally satisfying is the critique of nuclear power, long a favorite of the more Promethean left that is unsettled by the implications of the Second Law of Thermodynamics for their pet technocratic utopian fantasies.

Heller’s articles, more than eighty of them here, are heavily researched, so in addition to the clarity of his arguments, there is considerable grist for future public debates in the form of many, many well-cited facts in support of those debates. All in all, a book well-worth the price of admission.

My one quibble, and one that is not restricted to Stanley Heller by a long shot, is the lack of any real attention to questions of gendered power and how they are inflected not only in, for example, the militant misogyny of the Saudi regime, but in the ways we Westerners generally, and even the Western left, are still the captive of an essentially masculine discourse.

Stan Goff is the author of Hideous Dream—A Soldier’s Memoir of the US Invasion of Haiti, Full Spectrum Disorder—The Military in the New American Century, Borderline—Reflections on Sex, War, and Church, Mammon’s Ecology—The Metaphysic of the Empty Sign, and the novel, Smitten Gate. His upcoming book is Caeneus—Violent Women in Film as Honorary Males (Wipf and Stock).