The Champ in Our Corner 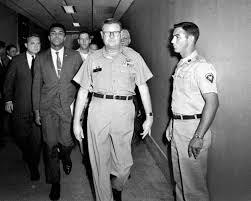 After Muhammad Ali refused induction–we had the champ in our corner.

When in June of 1963 I graduated from Mar Vista High School in Imperial Beach, just south of San Diego, California, I went to my local Selective Service Board—the draft board—and registered as a conscientious objector. My paternal grandfather, a Dutch immigrant and baker, was a socialist pacifist and his four sons had registered as conscientious objectors (C.O.s) in World War II and two of them—my father Herb and my uncle Bert—had been drafted and had done what was called alternative service (the alternative to serving in the military) at a former Civilian Conservation Corps camp in Big Flats, near Elmira, New York.

At the camp, my uncle Bert had become involved with a group associated with leftist Dwight McDonald and pacifist Dave Dellinger, and so when at the end of the war in August 1945t the C.O.s weren't released from the camps, he joined the protests, strikes, and walk-outs among the 12,000 men around the country still being held. It was called the “End Slave Labor in America” movement. The federal government put Bert in prison for short while, but then all of the C.O.s were finally let go.

So, as you can see, it was fundamentally my upbringing that led me to register as a conscientious objector. I had been inculcated since I was a young child in pacifism and taught to oppose militarism and war. But as the Vietnam War began to enter the public consciousness and an anti-war movement began to grow, opposition and resistance to war became not simply my family inheritance, but also my personal cause. I didn’t want to go to Vietnam to kill or to die for a cause that I couldn’t support, that is preventing the Vietnamese people from determining their own destiny and achieving their independence.

Yet the struggle of Black Americans for their civil rights and of the Vietnamese for their independence was also convincing me that I was not an absolute pacifist. I was really wrestling with things, with fundamental principles. At the same time, I felt guilty with the knowledge that while I might escape the war both because of having such a family history and because I had registered as a C.O. so early, many working class men, among them many African Americans, and Latinos were being drafted. Many of the kids in my high school and in college either joined the Navy to avoid the being drafted into the Marines or Army or were in fact drafted.

At that time, I was already something of an admirer of Cassius Clay—what young man wasn’t? Clay was an astonishing athlete, a charismatic personality, and in a way the personification of the new Black movement all around us: assertive and outspoken. Then Clay defeated Sonny Liston—twice—changed his name to Muhammad Ali, and in April of 1967 refused induction into the U.S. military—and two months later was found guilty of draft evasion. Muhammad Ali became one of my heroes, as he was a hero to all of us in the anti-war movement. We admired the courage it took to risk prison, his boxing titles, and possibly some patriotic or racist attack because of his stance.

Muhammad Ali made it clear that conscientious objection to war was a noble stand and a possibility for anyone who had the courage to make that stand. I hadn’t had to have much courage to register as a C.O. at 18. It was what I had been raised to do. But I knew that for others it was much more difficult. They risked being ostracized by their family and friends and attacked as traitors, as well as possibly facing prison terms. It was very hard for most to make such a decision. Now Ali had made it easier for us all. We had the champ in our corner.