Can We Achieve Justice On Planet Earth? 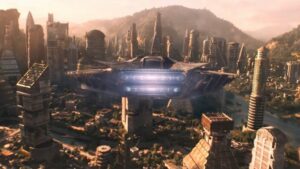 In this distressing yet inspiring historic moment, one of the most pressing questions is: What can we do to overcome racism? Because racism is rooted in both colonial ideas and cultural hegemony, I suggest that addressing the connection between popular culture and knowledge rooted in colonialism would contribute to eliminating discrimination and racism. It is a call to decolonize the film industry.

Discrimination is rooted in and based on colonial and imperialist knowledge. Colonial historical narratives produced in academia create and inform beliefs, stereotypes, jokes, casual comments, and violence. A spectrum of knowledge systems  inform a spectrum of racist behavior. Those spectra appear disjointed, but they are connected at the root.

Pop culture and academia are two realms of knowledge production that inform and influence each other, but the connection between them needs to be discussed and expanded on. The boundary between academic knowledge and popular culture, especially film, is blurry. At times they reinforce each other. Knowledge rooted in colonial political and academic institutions can inform films and other entertainment industries, while story lines, scenarios, and dialogue in films can confirm and/or inspire knowledge produced in academia. Highlighting the mutual influence between these two domains of knowledge production would be a major step toward addressing racism.

When the movie Black Panther was released more than two years ago, it was celebrated as a turning point, if not a revolutionary moment, in popular culture. It was because a Black superhero had assumed an unprecedented centrality in a Hollywood film. The film does do a fantastic job of upending the traditional stereotypes of Africa by showing Africa-related images that do not display misery, disease, and famine. It presents stunning African dresses, beautiful African jewelry, and breathtaking natural scenery. It uses African accents and African names in powerful ways.

However, Black Panther delivers Western notions of modernity and Western concepts of power using very Western tools of domination and hegemony. To tackle the reality of oppression, director Ryan Coogler succumbed to portraying spectacle, fake heroism, action, violence, wealth accumulation, and weaponry as optimal forms of power. The film resorts to using an element from somewhere else to build a story about an imaginary powerful African kingdom, Wakanda. Vibranium, an element found inside a fallen meteorite, is the secret behind this African kingdom’s wealth, power, and technological advancement. This storyline evokes a historical narrative used in the past whenever an encounter of organized life in Africa is found. It was explained away by linking it to somewhere else.

Oppressive colonial institutions, including academic ones, were founded and organized around such historiography. In this discourse, dark-skinned people are not capable of producing organized forms of life. This way the colonization of their lands, the exploitation of resources, and the enslavement of bodies and minds were justified. Colonialism created administrative “ethnic” groups, reified cultures into political identities, and divided the communities into “tribal” units in order to divide, control, and rule them. This mythical historiography and the false identities and unjust power relations it created continues to influence social and political dynamics in the continent. A few examples from the political struggles of African countries proves the gravity of the effects of these historical narratives. Colonialism framed the beginning of the history of Africa with its contact with the “outside world.”

In 2009, James Cameron tackled Western imperialism and cultural hegemony in his epic film Avatar, a powerful political commentary on cultural and political domination. Cameron makes strong points about Eurocentrism and disregard for others’ beliefs and traditions. However, Avatar, like Black Panther, resorted to outer space to make such commentaries. The story is set on a different planet with a magical element.

Seeing this pattern repeated in films that address racism, oppression, and violence, one ought to ask: Why do we need to look to the stars to change the reality on Earth? Shouldn’t we instead continue facing the facts about the myths and narratives the West has created and maintains about other nations in films and in academia? A film about Black people’s liberation must engage the work of serious historians such as John Henrik Clarke, Drusilla Houston, and Cheikh Anta Diop, to name just a few.

One of Black Panther’s successes is that it explores the nature of the relationship between Black people in the diaspora and Africans in Africa. This relationship is cleverly portrayed in the conflict between T’challa, the king of the imaginary African kingdom Wakanda, and his orphaned African-American cousin, Erik Killmonger. It  conveys a relationship between Black people in the diaspora and Africans on the continent and the debate regarding heritage, legitimacy, and overcoming discrimination. Revealing true narratives of African history in films should be the focus of a partnership between the African diaspora and Africans, Black people in academia and those in the film industry. That includes anti-colonial wars, resistance against dictatorship, youth movements in African countries, revolutions, arts, etc.

When using futurism in films, can we envision a future of humanity where the peaks of science and technological achievement are not advanced weapons? Can we imagine a future where the power of nations does not depend on their stores of “precious” material elements and the manifestation of power is not “enhanced” tools of violence and war? Can we think of advancement in realms other than material wealth and war, a future for humanity that is not a refined version of its bloody past?

The fact that the elected commander-in-chief describes the entire continent with its fifty five nations as “Sh*t hole” countries, plus the recent events of George Floyd’s death, in addition to innumerable past similar events, proves the need to confront this issue more thoroughly. At this historic moment, we should take all possible joint ventures of knowledge production to contribute to overcoming discrimination. We do not need to use fictional histories; we need to reveal that the history has been written about Africa and Africans is the fiction.