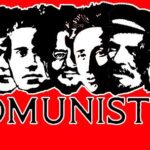 This note by Comunistas blog does not seek to analyze the situation in Cuba. It seeks to denounce the violent detention of the demonstrators, to denounce that this time the repressive forces of the State put themselves in the opposite place, that they repressed Cubans, that they used pepper spray and all available resources. This note demands the freedom of all the detainees and especially of Frank García Hernández, Cuban historian and Marxist, arbitrarily detained. For Leonardo Romero Negrín, a young socialist student of Physics at the University of Havana. For Maykel González Vivero, director of Tremenda Nota, a marginal magazine. For Marcos Antonio Perez Fernandez, a minor, a student at the Pre-University. For all those violently detained on this black afternoon that Cuba will not forget.

Comunistas appeals to the solidarity of the international Marxist community and also to the conscience of the Cuban government. This time it is about a people that needs answers and dialogue. It is about a civil society that does not want annexation, but to participate and decide the destiny of their nation. Comunistas Blog condemns the repression and says to the bureaucracy: enough.