Building an Alternative to the Democratic Party 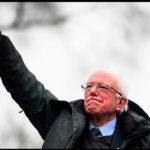 Bernie Sanders has ended his candidacy

When we feel our lives are in danger as they are in this pandemic, it can be very hard to look critically at national politics, by which I mean the end of Bernie’s candidacy and Biden’s coronation as the Democratic nominee for President. Maybe we first need time to grieve the end of Bernie’s campaign, the prominence of someone who self-identified as a socialist, and the hope he could win the nomination.  Although I have watched social movements I have supported with my heart, time, and wallet become drowned in the Democratic Party, though I wouldn’t register as a Democrat for that reason, I am feeling this loss. I was smitten by Bernie.

After enduring Democrats giving away our schools, hospitals, jobs, and planet to the highest bidders for decades, it was glorious to see this reality put on the table in the Democratic primary, to watch socialism discussed, taken up by thousands of young people drawn to political activity.  Hearing Bernie take the stage in debates broadcast on national TV to argue for radical reforms that make such obvious sense but for so long have been derided as impossible, impractical, lunatic, hearing him express these ideas with such clarity and passion, made my heart swell. Seeing so many share that feeling was intoxicating.

Yet, analysis that contradicted the love has been pushed aside. One accurate observation mostly ignored was how positions identified as socialist were old-time New Deal-style U.S. liberalism.  The campaign wasn’t called on its unwillingness to reject education’s economic purposes, to address straightforwardly what both Democrats and Republicans have refused to say – that  most jobs capitalism is creating are low-paid, a fact that can’t be ameliorated by reforming schools.  The importance of electoral activity itself was overstated among many of Sanders’ supporters, the difference between winning elections and building social movements misconstrued.  Sanders’  foreign policy positions, though more progressive than what the Democrats push both when they have power and don’t, were not what many activists wanted from a spokesperson for the left. Still, a remarkable aspect of this campaign, one that I think was profoundly educative about what we should expect from politicians, was Bernie’s ability to stick to principles and yet grow, to change his positions when confronted to do so.

Both the strength of Sanders’ campaign as well as the limitations partly stem from a dilemma Ellen Willis described in 2001, progressives’ abusive relationship with the Democrats: “When the Democrats get into power, they compromise with the Right and betray their left supporters; on the other hand, when they’re out of power, they completely collapse and surrender to the Right.”  Willis observed that the Democrats’ and GOP’s convergence on so many issues had delegitimized politics for millions, making them feel hopeless about change. This persuaded her about the importance of intervening in electoral politics, as an auxiliary, not a substitute for building social movements. Electoral activity in turn demanded “changing the winner-take-all system to one that’s more hospitable to multiple parties… so that a dissident party can at least intervene in the debate, whether it can win or not, and not simply be dismissed as a as a spoiler. In other words, the left has to start agitating for such measures as proportional representation and runoff elections, as well as fighting the various kinds of disenfranchisement that take place routinely, not just in Florida 2000. In the present situation, one person one vote has become a radical demand.”

Here we are twenty years later with the legally-enforced duopoly Willis argued we needed to change, though with far more voter-suppression.  What’s changed?  Bernie’s campaign illuminated for millions of people that ideas dismissed by powerful elites that control both parties are actually what’s realistic, from halting climate change to Medicare for All  to college for all and canceling student debt – and so much more, our dreams and hopes for a better life, changes to be wrested from the ruling class.

At the same time, we have no vehicle to promote those ideas in national politics.  Bernie ran as an independent when he began his national career (a campaign to which I contributed ) because he knew his principles were indigestible to the Democratic Party.  Though it is a bitter pill to swallow, his campaign for President within the Democratic Party has reinforced that truth. The Democrats will make a verbal nod to some of Bernie’s ideas now that his candidacy has evaporated, but in practice they will continue with business as usual, as they always do because the left has nowhere to go. Biden has shown this in refusing to endorse Medicare for All making a bow to Bernie with his proposal to allow people who are 60 to opt in to Medicare (the insurance companies can’t make money off them so they’re fine with “expanding” Medicare this way) and propping up the “public option,” which has been exposed as a gift to insurance companies.

I’m not voting for Biden. Nor am I debating about why the arguments we should be trying to make Biden change his politics or should just hold our noses and vote for him as the “lesser evil” have been shown countless times to be a dead-end.   What I think we need to pursue at this moment is how to build a new electoral vehicle, a national party that will be based on principles to which Bernie Sanders devoted his political career.  The discussion can’t be “whether” or “if” but “how.” I’m open to ideas, as is New Politics, which invites thoughtful, informed responses for an exchange, on our website.

Note: Our forthcoming print issue, Summer 2020, will have a symposium on “Organizing after Sanders.”  There’s still time to subscribe so you can read these original pieces by activists well before the issue’s contents are made public on our website.