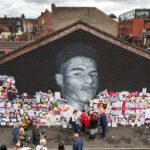 July’s Euro 2020 international men’s soccer tournament was meant to end in glory for Britain’s Tories. The England team reached the final, and were poised to win their first major international trophy since 1966, to set off an outpouring of national euphoria – and help to secure the 2030 men’s World Cup for Britain.

But pretty much everything went wrong. Media coverage before the match was dominated by scenes of drunken supporters behaving thuggishly, including hundreds breaking into the stadium without tickets and fighting other fans. Large numbers of supporters booed as both teams took the knee before the game. And then England lost on penalties, having been outplayed by a more experienced team.

Three young black players – Marcus Rashford, Jayden Sancho and Bukayo Sako – were among the penalty takers, and following the result there was a vicious storm of racist abuse directed against them on social media. That in turn sparked a player-led backlash against both the racism endemic among a section of England’s hard-core supporters, and the Tory politicians who both enable and pander to that racism.

When Home Secretary Priti Patel tweeted her opposition to the abuse, Tyrone Mings, another black member of the England squad blazed back: ‘You don’t get to stoke the fire at the beginning of the tournament by labeling our anti-racism message as ‘Gesture Politics’ & then pretend to be disgusted when the very thing we’re campaigning against, happens.’

His response was retweeted by over half a million people, and echoed by the TV pundit Gary Neville (whose brother manages the England women’s team), when he replied to Boris Johnson with a one-word tweet: ‘Liar’. In other signs of support for the three, Bukayo Saka gained almost one and a half million new followers on Instagram, and when a mural honouring Marcus Rashford was defaced, thousands of supportive messages were left and hundreds of people attended a support rally.

And while there was no official confirmation from either side, it was widely rumoured that Boris did not hold an official reception for the England team because some or all of the players would refuse to attend.

Men’s soccer is far and away the most popular sport in Britain, both in terms of participation and audience (it’s estimated that some 30 million people watched the Euros final, and that doesn’t include those watching in pubs or on outdoor screens). Like any mass sport, it has always been intensely political, but there has long been an official ethos of ‘keeping politics out of sport’ aimed at stopping any expressions of political dissent in stadiums or on the field.  This has been backed up by swingeing sanctions against those who breached it, for example Glasgow Celtic fans showing support for Palestine or Liverpool players supporting striking dockers.

But in the last few years that’s begun to change, as a new generation of articulate and engaged players have used the opportunities of social media to take up a wide range of social and political campaigns from abortion rights to Stonewall’s Rainbow Laces initiative

The most high-profile victory was won by Marcus Rashford, who twice forced the Tory government to back down over plans to stop providing free meals for poor children during school holidays, the second time organizing an online petition that gathered over a million signatures. He also raised some £20 million for providing hot meals to children out of school because of the pandemic, explaining that the impetus for both came from his own childhood:  ‘As a family, we relied on breakfast clubs, free school meals, and the kind actions of neighbors and coaches. Food banks and soup kitchens were not alien to us.’

But the biggest battles of all have been over racism, for decades a burning issue in soccer. The growing numbers of black players, and their increased confidence to tackle the issue, has led to significant changes at all levels of the game. Campaigns such as Show Racism the Red Card and Kick it Out have been influential in challenging racism and racist abuse at all levels of the game.

However, these have mostly been top-down, official campaigns. The initiative for players to take the knee before matches in opposition to racism, inspired by the Black Lives Matter demonstrations of summer 2020, is something quite different. It began with the men’s Premier League (the equivalent of the NFL or MLB), and spread to lower levels and to the women’s game, which for a variety of reasons is still much whiter than the men’s game.

Though it was quickly incorporated into the routine of matches – it starts and ends on the referee’s whistle – it’s nevertheless an initiative sustained by the belief of the players involved, which clubs and officials have had to adapt to. At the start of the season in 2020, grounds were still closed to spectators, but when this was relaxed, small but significant numbers of fans began to boo the gesture. Boris Johnson refused to condemn those who booed, and Priti Patel condemned taking the knee as ‘gesture politics’.

This reaction prompted a decision among the England squad to continue taking the knee before all of their games in Euro 2020, with Jordan Henderson, Liverpool FC captain and one of the key white players behind the decision arguing that:

I think it shows that, if there are still people booing because we’re standing together against racism, then there really still is a problem and we’ve still got to fight it and stand together on that. It shows even more that we have to keep going, keep fighting it.

There are all manner of contradictions here, not least that some of the most effective opposition to the Tories – in England at any rate – is coming from a group of young millionaires. Players and managers have repeatedly argued that it’s not a ‘political statement’, though the England manager Gareth Southgate preceded that by saying it was a gesture ‘of solidarity with team-mates, one of solidarity with black people in society’, which is clearly a political view.

Nationalism is also a key component of the mix, with all the players speaking of their pride in playing for England, and some supporters arguing that their stance shows the emergence of  ‘a better kind of Englishness’. The problem is that, while it’s true that people’s identification with England draws on all sorts of sources, one cannot simply wish away the long histories of Empire, domination and assumptions about national superiority that make English nationalism particularly toxic. More importantly, the argument about ‘progressive nationalism’ individualises racism as simply a set of bad attitudes that people can overcome, rather than seeing it as something rooted in structures and institutions which requires a political, rather than moral, challenge.

As one more perceptive critic argued:

“These polite incrementalists believe that even if progressive patriotism once again failed to fully materialise, the groundwork is nonetheless being laid. But the right is creating its own new stories. Because culture war is not about winning a debate about what constitutes England through factual disputes about its character, its statues, its football team or its history of empire. It is not a peripheral indulgence, or a mere confection. Culture war is an aggressive political act with the purpose of creating new dividing lines and therefore new and bigger electoral majorities.”

Culture wars are central to the Tory government’s current political strategy, not least because they cannot deliver material benefits to their voting base. But the venom with which they attack is not a sign of confidence – quite the reverse. Time and again they announce a new policy only to have to quickly reverse after a massive public outcry – as I was writing this, the new Health Secretary said that people should ‘learn to live with, rather than cower from, this virus’, only to have to apologise within hours. And the government has had to repeatedly extend some forms of protection from the effects of the pandemic despite wanting to cut them back for short-term economic gains.

The Tories continue to ride high in the opinion polls, but their seeming popularity is less solid than it appears. If you dig under the headline figures, about a third of respondents say they don’t know how they would vote, or wouldn’t vote. And much of the explanation for the gap between the Tories and the Labour party lies in Labour’s inability to offer a clear alternative.

Under their new leader, Keir Starmer, Labour has been waging a war on the left and Jeremy Corbyn’s legacy. Corbyn himself remains suspended from the Parliamentary Labour Party. Local parties have been forbidden to discuss his suspension, with dozens of officers suspended for allowing any such discussion. Expulsions have been stepped up, and Starmer’s deputy, Angela Rayner, threatened ‘If I have to suspend thousands and thousands of members, we will do that.’

The outcome is that Starmer’s personal poll numbers are now worse than Corbyn’s were, and Labour were until very recently from eight to sixteen points behind in headline opinion polls. In three by-elections in England this year, Labour first lost a seat to the Tories, then recorded just 622 votes in another constituency (where according to one Labour insider they had 600 members), and lastly scraped home by just 300 votes in a third.

But the Tories’ vulnerability was underlined by their losing the second constituency, previously a Tory safe seat, to the Liberal Democrats. And they are doing much worse in Scotland and Wales than in England, as the devolved governments have used such powers as they have to steer a more popular path than in England. There is much wrong with the Scottish National Party and Welsh Labour, but both are clearly anti-Tory and seem to offer real alternatives to their supporters.

The latest offering in the culture war is a new plan to give police even more powers following on from the recent Policing and Crime Bill, including Johnson threatening ‘chain gangs’ of prisoners in hi-vis jackets. Crime and moral panics (with the inevitable accompanying racist overtones) are seen as a key weapon by the Tories, as they play well with their older home-owning core support, and Labour will be too scared of seeming ‘soft on crime’ to oppose them. What is under attack here is the right to protest, and to defend it we will have to take to the streets. We can take heart from the fact that the Euros have shown us the breadth and depth of the audience for the fight against racism – the Tories may be vicious, but a determined defense can make it impossible for them to get their own way.