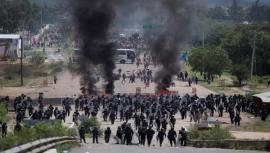 The state murder of nine people led to an immediate outcry and demands for investigation by national and international human rights groups, such as the Mexican Office of the United Nations High Commission for Human Rights. Amnesty International also called for an investigation into the human rights situation in Mexico. Consequently, for the first time in a year, the Mexican Minister of the Interior agreed to negotiate with the National Coordinating Committee (la CNTE) of the Mexican Teachers Union (el SNTE).

Meanwhile protests by teachers and their supporters, which have been ongoing in Chiapas and Oaxaca, spread to ten states: Chihuahua, Guerrero, Jalisco, Mexico State, Michoacán, Morelos, Tamaulipas, Veracruz, and Zacatecas. These protests represent a significant expansion  of the movement from its core states of Chiapas, Guerrero, Michoacán and Oaxaca. Teachers in all of these states engaged in marches and other forms of protest, while in Oaxaca teachers blocked more than 35 different roads and highways. Members of the Independent Union of Workers of the Autonomous Metropolitcan University (SITUAM) also engaged in a workstoppage in support of the Oaxaca teachers.

On June 19 in the small town of Nochixtlán, whose population is made up of indigenous Mixteco people engaged in small-scale commerce, the Federal and State police using high-powered automatic weapons attacked teachers, students, and residents, killing 8 and wounding scores. A ninth person, an innocent bystander, was killed in the city of Oaxaca.

The Nochixtlán massacre comes less than two years since police in Guerrero were involved in the killing of six, wounding of 25, and disappearance of 43 Ayotzinapa Rura Teachers College students.

Faced with another international scandal, Minister of the Interior Miguel Ángel Osorio Chong agreed to meet with leaders of la CNTE, the organization that has headed up the massive demonstrations in Oaxaca and other states. Osorio Chong said, however, that the purpose of the negotiations was only to reduce tension and restore order to the state, and that the Education Reform Law would not be up for discussion. Mexican President Enrique Peña Nieto, on a tour of Canada before the meeting of North American heads of state, reiterated the point, saying that there would be no negotiation of the Education Reform Law.

Once again, as in the case of Ayotzinapa, there have been demonstrations in solidarity with the Oaxaca teachers and protests against the Mexican government at its embassies and consulates in Canada, the United States, and in Europe. As Peña Nieto toured Canada, on his way to the “Three Amigos” summit his steps were dogged by protests over the government killing of the teachers.

La CNTE, a dissident caucus within the Mexican Teachers Union (el SNTE), has argued that the Education Reform Law exists solely to weaken the teachers union, to exert greater control over teachers, and that it represents the cutting edge of a policy aimed at the privatization of education. Peña Nieto has denied that the government has any intention of privatizing the schools.

Negotiators for la CNTE reported that the first day of negotiation had been fruitless and that with the government refusing to discuss the law the expectation is that they will continue be drag on without issue. The government appears to be engaging in negotiations only to enhance its image. So, as bloody June ends, there seems to be no end in sight for the conflict between Oaxaca’s teachers and the Mexican government. More protests, more repression, and more bloodshed can be expected.