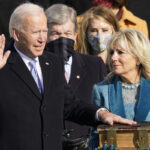 The day after President Joseph Biden’s inauguration I went to pick up my six-year-old granddaughter from her public school in Brooklyn, as I do regularly. The school is in a neighborhood of progressive voters, and many of the teachers and students are Black and Latin. When the students trooped into the schoolyard, surprisingly each one was carrying and waving an American flag. Apparently the school had decided to celebrate Biden’s inauguration in this way. As we walked home, a Black woman with a Caribbean accent stopped, looked at us, pointed at the flag, smiled and said, “That’s nice to see. We have something to celebrate. We’re going back to normalcy.”

With Donald Trump turned out of the White House and his attempted coup behind us, millions of Americans share a sense of relief. Still we know there is much suffering and great need while we remain in the midst of the coronavirus pandemic and a severe economic depression.

Biden began his presidency by signing dozens of executive orders to overturn policies of former president Donald Trump and to set a new direction for the country. He brought a halt to the building of the wall on the Mexican border, ended the ban on travelers from Muslim nations. He stopped Trump’s sweeping deportation policies, and he called upon his cabinet to preserve Deferred Action for Childhood Arrivals (DACA), a program that grants residence and work permits to children brought to the United States by their parents. He also extended coronavirus-related moratoriums on federal student loan payments and housing foreclosures and revoked his predecessor’s permit for construction of the Keystone XL oil and gas pipeline. America will also rejoin the Paris Climate Accord.

The most urgent issue, however, is COVID. Trump’s lack of a national plan was largely responsible for the failure to control the virus that has taken 400,000 lives; so perhaps the most important act Biden took was to to call for a wartime approach to dealing with the pandemic. He put forward the first national plan to fight the virus, declared that the government would vaccinate at least 100 million people in 100 days, and he ordered that masks must be worn in all spaces under his control, such as on federal property and in interstate transportation. The United States will also rejoin the World Health Organization.

Biden announced too that he will propose to Congress his America Rescue Plan that includes another $1,400 in direct payments and supplemental unemployment of an additional $400 per week, as well as an extension of the moratorium on evictions and foreclosures. The plan also includes $350 billion for state and local governments and $400 billion in additional funding to fight the pandemic. The new president will find it difficult to push his proposal through Congress where the Republicans will resist, and the Democrats have just a 10-vote majority in the 435-member House of Representatives and just a one-vote majority in the Senate.

While Biden’s executive actions and legislative proposals are welcome, he opposes the progressive agenda that includes such things as single-payer health care, forgiveness of student debt, the Green New Deal to address climate change, a reduction in the military budget, a turn away from an imperialist foreign policy, and an end to nuclear weapons. The question is whether the movements of the last few years—Black Lives Matter, the teachers strikes, the fight for $15 an hour, immigrant rights, and Black and Latinx voter mobilization—can be turned into a force that combines action in the streets with political reform.

The Democratic Socialists of America, with its 85,000 members, has launched a “tax the rich” campaign and continues to work on both single-payer health care and the Green New Deal. Many Americans will want to give Biden a chance to fulfill has promises, though there will surely be more pressure to make the government go further to help the working class. The spring will bring not only April showers and May flowers to delight my granddaughter as we walk home from school, but very likely a new progressive movement of resistance to Biden and the Democrats.