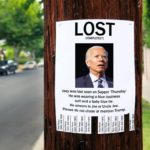 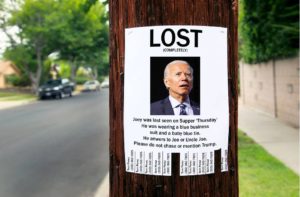 Presumptive Democratic Presidential nominee Joe Biden replied testily to Bernie Sanders during their last debate, saying that the immediate need was to defeat the coronavirus pandemic, that Bernie’s vaunted Revolution could wait. But then Biden went MIA for the next two weeks, and when he did emerge, he made embarrassing gaffes before the media, gaffes so major and embarrassing he even went so far as to cancel a previously scheduled press conference!  (Consider what he said in response to the interrogator from “The View,” who asked Biden his response to Trump’s then pending “reopening” of the U.S. economy, saying that “The cure can’t be worse than the problem.”  Biden responded with this incomprehensible statement, “We have to take care of the cure.  That will make the problem worse, no matter what.  No matter what.”) Biden’s official campaign website (https://joebiden.com) combines ambitious sounding programs with generalized platitudes, and his proposals for dealing with COVID-19, though indeed ambitious sounding, are irrelevant at present, as he is not in any office now with authority to implement or forcefully propose any of them, and won’t be unless he wins in November; then he can begin to act on COVID-19 in January 2021, ten months from the time I originally started writing this article (March 31, 2020)!

Bernie Sanders, meanwhile, has not only proposed several measures to help working families cope with the coronavirus pandemic and the attendant massive layoffs, but as a Senator in office can actually propose them to his colleagues for action in the here and now; indeed, did so during the debate on the recent coronavirus stimulus legislation, when he took to the floor to chide Republican Senators for not supporting provisions that directly helped working people, but favored corporations and businesses instead. He helped make sure such provisions were in the stimulus bill, which did pass 96-0.  He’s also asked campaign donors to help finance nonprofits on the front lines of combating coronavirus, and has held four coronavirus virtual town halls. He has acted consistently like what we would want in a President, notably in contrast to Joe Biden, who seems more hapless every time he makes a public appearance.

Yet Biden is the Democratic Presidential front-runner, presumably because he is “safe” and is known, as well as a staunch centrist.  But of all the Democratic centrist Presidential candidates, he is the least distinguished and most inept of the lot; and does indeed noticeably pale in comparison to Amy Klobuchar, Kamala Harris, Cory Booker, and even Pete Buttigieg. This despite being Obama’s Vice President, despite being a U.S. Senator for over three decades. Yet the “never Bernie” forces have coalesced around him as supposedly the most “electable” opponent to run against Donald Trump, presumably because his winning six states in the Super Tuesday primaries, especially South Carolina’s, supposedly clinched it for him, and for his backers.

Make no mistake about it:  this coalescing of the “never Bernie” forces within the Democratic Party around the hapless but “known” and safely centrist Joe Biden is class warfare within the Democratic Party itself.  Arrayed against Bernie Sanders are not only the DNC (which never did warm to Bernie, despite his drawing palpable, enthusiastic support at the grassroots, particularly among young activists), his obvious drawing power, and his appeal even to the disaffected voters of all races and ethnicities who either voted for Trump, sat out, or else voted third-party, rather than cast their votes for Hillary Clinton in the 2016 election—from which the Democrats are still reeling. This carries down from the DNC to Democratic pols in office and Party stalwarts, fretting about the “down-ticket” anguish a Bernie Sanders at the head of the ticket would supposedly cause.  And it certainly agitates the big-money Democratic donors, who would seemingly prefer another four years of Trump in office rather than risk their fortunes (literally) at the hands of a man who has forcefully called for a “democratic socialist” Political Revolution consistently for forty years!

Despite the immense popularity among ordinary working people and the young for signature Bernie Sanders programmatic proposals such as Medicare for All, free college at state universities for all who wish to enter, and the abolition of the enormous student debt load that saddles so many of the young for life, these are far too “radical” for those at the top, most notably Bernie’s clarion call for the “rich to pay their fair share” of the tax burden.  No, they’d rather keep their money, their influence, and their power, thank you, even if that risks four more years of Donald Trump.  They’d rather trust in a safe, platitudinous “tinkerer” such as Joe Biden to shield them from such “excesses” as Bernie proposes, even if what Bernie does propose is, in fact, but an extension for the 21st Century of the New Deal and the social welfare provisions of the Great Society.

They, the top echelons of the Democratic Establishment, respected “moderate” voices within Corporate America, have grown fat and content with decades of neoliberalism, whether Democratic or Republican; they are clearly in the top 1%, and not at all in the 99% beneath them (to invoke terms made famous by Occupy); and they want to keep it that way.  They do, in their own constricted way, truly loathe Donald Trump, but know that another four years of Trump would enable them to keep their money, and much of their power and influence.  They want no part of a “democratic socialist” Political Revolution that would upend this, that would upend a tolerable, if not all that comfortable, or comforting, status quo.  Sadly, many ordinary people, people really of the 99%, feel similarly; especially older persons who do bother to vote, in contrast to the young, who may really like Bernie but don’t bother going to the polls to show that support.  More proof, unfortunately, of the correctness of Abraham Lincoln’s “You can fool some of the people all of the time…”

All this is given support by an article in the April 1, 2020 New York Times by Astead W. Herndon, ”How ‘Never Bernie’ Voters Threw In With Biden and Changed the Primary” (https://www.nytimes.com/2020/04/01/us/politics/biden-sanders-democratic-voters.html).  In this article, Herndon writes:

“Rarely has political momentum flipped as quickly as it did in the first half of March, as Mr. Sanders lost serious ground to Mr. Biden before the coronavirus slowed their race. There are well-known reasons for the shift: Moderate candidates like Mr. Buttigieg and Senator Amy Klobuchar of Minnesota rallied around Mr. Biden. He enjoyed demographic advantages, particularly with black voters. And turnout among young voters and liberal nonvoters did not surge, failing to reshape the electorate as Mr. Sanders had hoped.

But beyond ideology, race and turnout, a chief reason for Mr. Biden’s success has little to do with his candidacy. He became a vehicle for Democrats like Ms. King [a self-identified “progressive” financial investor in Boston, one of the “never Bernie” Democrats interviewed for this article—GF] who were supporting other candidates but found the prospect of Mr. Sanders and his calls for political revolution so distasteful that they put aside misgivings about Mr. Biden and backed him instead.

In phone interviews, dozens of Democrats, mostly aged 50 and over, who live in key March primary states like Massachusetts, Virginia, Michigan and Florida, said that Mr. Biden’s appeal went beyond his case for beating President Trump. It was his chances of overtaking Mr. Sanders, the only candidate in the vast Democratic field they found objectionable for reasons personal and political.”

In this, the members of the Democratic Establishment, these studied “moderates” and “centrists,” these big donors heavy on “diversity” and “social liberalism,” show an outright affinity with such reactionaries as William F. Buckley, Jr. and Frederick Hayek. Buckley is, of course, notorious for his expressed views that the “freedom to shop” is really the ultimate freedom, and once wrote that he would gladly give up his voting franchise (which he claimed was diluted to the point of adulteration anyway) for the “right” to have complete control of his money!  Hayek once praised the brutal dictatorship of Pinochet in Chile, quipping that “my personal preference leans toward a liberal dictatorship rather than toward a democratic government devoid of liberalism.”  (Hayek is using “liberal” here in the European sense; what we in the U.S. would call “neoliberal” or “free market-oriented.”)

The “socially liberal” but “fiscally conservative” “moderates” of the top echelons of the Democratic Establishment have really more of a lover’s quarrel with a Buckley or a Hayek than not, even though, notably during the Civil Rights era of the 1960s, Buckley openly supported segregation.  (During his February 18, 1965 debate with James Baldwin at Cambridge University, England, Buckley upheld “the right guaranteed to an American entrepreneur to refuse to do business with whomever he likes.”)  But the Democratic Establishment doesn’t really want full racial, gender  and social equality for all; it prefers “diversity,” “equitable representation” of blacks, Latinos, women, gays, and other “marginalized groups” in the “meritocracy,” an “equal playing field” for all “able” to enter Harvard or work for Goldman Sachs!  That is why for them it really is “never Bernie,” why they are willing to coalesce behind even a Joe Biden, why they are willing to risk giving even a Donald Trump four more years to wreak havoc—as he has notably done so far!  “But don’t talk about revolution/That’s going a little bit too far,” sang Phil Ochs in his acerbic “Love Me I’m A Liberal.”  That certainly extends to the “democratic socialist” Political Revolution of Bernie Sanders, even if, as Bernie himself says, it owes more to FDR than to V.I. Lenin. But that is part and parcel of the class struggle today, which is taking place in the Democratic Party as much as it is elsewhere.