The Banality of Evil: Elites Close Ranks Behind Trump 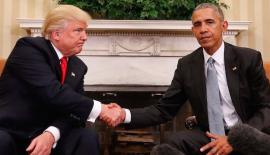 Happy Thanksgiving! As we celebrate the America’s founding myth of the Pilgrim Fathers welcomed by the Indians, the National Guard, militarized local police and (unlicensed) security guards continue to brutalize unarmed Standing Rock Sioux Indians (and members of dozens of other tribes) protesting the construction of the unapproved Dakota Access Pipeline on their sacred lands and water sources.[1]

Meanwhile, as public outrage concentrates on President-elect Trump, our sitting Democratic President, a modern Pontius Pilate, washes his hands of this ongoing atrocity against Native Americans by “letting it play out.” And although Obama has used his Presidential Pardon to free hundreds of non-violent drug offenders, the former leader of the American Indian Movement, 72-year-old Leonard Peletier, continues to rot in jail for his role in the 1975 occupation of the Pine Ridge Reservation. Indeed, according to Amnesty International[2] there are dozens of high profile long-term political prisoners Obama ought to pardon, many in their 80s, including Black Panthers and Puerto Rican activists in prison since the '60s, often in solitary.[3]

Obama still has nearly two months left in the most powerful office in the world. He has time to right some of the wrongs for which history will hold him responsible. With the stroke of a pen he could stop providing arms, intelligence and tactical support to the Saudi Arabian airforce terror-bombing hospitals, schools, and funerals in Yemen. He could cancel his international program of assassination-by-drone of nameless suspected ‘terrorists’ selected (like your Amazon.com recommendations) by algorithms. He could send emergency aid to the suffering population of bankrupt Puerto Rico, crushed under the draconian conditions imposed by an appointed a commission of bankers. And that’s for openers.

But Obama won’t. Meanwhile, our Deporter-in-Chief continues to get a free pass from the liberals and the ‘left.’ Why?

A week after the catastrophic Nov. 2016 election upset, it is clear that the entire political/mediotic class, both right and left, is closing ranks behind Donald Trump. While millions of Americans are anguished about racism, war, global warming, and increasing violent attacks on minorities, immigrants (particularly Muslims), and LTBG folks. Students and demonstrators continue to chant “Not Our President,” but the elites are busy normalizing the abnormal, legitimizing the illegitimate, and banalizing evil.

Reading from right to left, the Republican “big tent” now includes formerly unmentionable proto-fascist outliers : white nationalists and the Alt/right. The Republican establishment, which once lifted its nose at Donald’s racist, sexist buffoonery, now welcomes Trump and his wolf-pack like long lost brothers. The Lord-High Donald-elect will doubtless signal them His forgiveness by appointing Gov. Romney to something or other. A jubilant Market is expressing its confidence as stocks rise.

His Trumpship has been less charitable to the broadcast media, whom he cannot forgive for belatedly drawing attention to his blatant lies (printing little bits of truth on little ribbons at the bottom of the screen). This week he summoned the mainstream TV pundits and moguls to his Tower for a private audience on the condition that it would be strictly off-the-record. And of course the media lap-dogs and curs came in fawning and wagging their tails in hope of conciliation (ignoring their professional obligation to remain independent and inform the public).

Having thus humbled these faux-journalists of the airwaves by tempting them with the illusion of “access,” the boss of The Apprentice showed them the whip and brought them to heel. “They learned *nothing* over past 18 months of covering  Trump,” tweeted Erik Wemple of The Washington Post.[4] In any case as long as they don’t shut down Trumps Twitter account, he doesn’t need them any more. Welcome to the post-truth era.

On the “left,” Obama and all the Democrats except good old Bernie Sanders are singing the same song: “All we are saying/is give Trump a chance.” And even Bernie feels obliged by decorum to join the Democratic chorus by offering to ‘work with Trump’ on creating jobs rebuilding the infrastructure (while expressing his doubts)

There are even elements on the far left who seem ready to banalize evil by “giving Trump a chance.” For example their are Zombie Stalinists in the anti-imperialist movement who are overjoyed that Trump loves their idol Vladimir Putin. They support Putin’s bombing of Aleppo and his occupation of Crimea, and proclaim that Trump’s election “saved us from WWIII.” There are also state-socialists and neo-Keynesians whose mouths are watering at the prospect of Trump’s infrastructure promises.

As for the official labor movement: “None other than AFL-CIO president Richard Trumka  raced to the front of the line to congratulate Trump on his victory and pledge to work together with the new commander in chief. Trumka proclaimed “The President-elect made promises in this campaign—on trade, on restoring manufacturing, on reviving our communities. We will work to make many of those promises a reality.”[5]

Apparently the official left are willing dupes of the world’s best snake-oil salesman, who made his fortune hiring non-union, undocumented workers to build his casinos and by borrowing hugely, syphoning off the money, and then skipping out with the profits, leaving investors, contractors and employees unpaid. Surprise: Trump’s proposed infrastructure plan is also a scam.

Instead of taking advantage of low interest rates and using government money to hire workers to repair and rebuild the bridges, tunnels, roads, schools, parks and energy sources that were originally built under the New Deal and still in use, Trump would give huge tax write-offs to private interests and allow them to keep and profit from whatever they build forever (for example to collect tolls in perpetuity). These private contractors would not be likely to undertake non-profit projects like schools, and they would be free to make any labor arrangements they choose.

“As the White House official responsible for overseeing implementation of President Obama’s massive infrastructure initiative, the 2009 Recovery Act, I’ve got a simple message for Democrats who are embracing President-elect Donald Trump’s infrastructure plan: Don’t do it. It’s a trap,” warns Roland Klain. “Trump’s plan is not really an infrastructure plan. It’s a tax-cut plan for utility-industry and construction-sector investors, and a massive corporate welfare plan for contractors.”[6]

Nobel-prize economist Paul Krugman concludes: “we already know enough about his infrastructure plan to suggest, strongly, that it’s basically fraudulent, that it would enrich a few well-connected people at taxpayers’ expense while doing very little to cure our investment shortfall. It’s hard to see any reason for this scheme unless the inevitable corruption is a feature, not a bug.”[7]

As I wrote here last week, “We should have no illusions about the impact of Donald Trump’s victory. It is a disaster. The prospect of a unified right-wing government, led by an authoritarian populist, represents a catastrophe for working people. Some may have hoped that Trump’s outlandish campaign threats were not meant to be taken seriously; but the man means business, and he is not going to waste his crucial first hundred days pussyfooting around, as Obama did.”[8]

Nor should we have any illusions about the Democratic “opposition” — the left wing of the U.S. capitalist duopoly ­— although as individuals many in government and the media will be moved to speak out. This is very important to note. We are not alone. As my daughter, Jenny Greeman, wrote on her Facebook page last week:

Today anguished Americans everywhere are sitting down to Thanksgiving wondering what to do and where to turn. Jenny is wearing a safety-pin on her lapel as a signal that she is prepared to intervene non-violently to aid and comfort any victim of bullying. I hope that catches on. At midnight, decent folks in the government, the military, the corporate media will be worrying about the future during their too-much-turkey insomnia. They may be weighing the risks of speaking out against the shame of going along to get along. Count on them. As one brave official breaks ranks, so will others. Think “Snowden.”

The essential thing to not to blame each other for this catastrophe, which we are all going to have to suffer through together. Especially (you folks on the left) not to stigmatize white working people. Many of them voted first for Sanders (in Democratic primaries) and then out of desperation, for Trump. Respect their dignity as people: their revolt against the elites was as much about dignity as it was about economics. When their crony-capitalist con-artist throws them to the wolves, they’ll realize they’ve been screwed and will join us in the struggle.

Meanwhile, we ourselves have to join the struggle. I mean now, today, Thanksgiving 2016. Time to join the struggle of the embattled Indians of North Dakota who are non-violently defending the last scraps of what was stolen from them in unfair treaties: their sacred burial grounds and their sacred river, source of their water. Energy Transfer Partners, protected by the state, the National Guard, and a brutal private security company, has apparently already begun digging a tunnel under the river, despite the lack of an easement from the Army Corps of Engineers.

This week the Indians’ camp-site was invaded without provocation in the middle of the night by North Dakota law enforcement, shooting rubber bullets, launching gas-canisters at eye-level, and spraying the Indians from a water-cannon in sub-zero weather. (It’s a wonder the army didn’t give them anthrax-infected blankets to keep warm!) Three hundred indigenous and their allies were treated for injuries, several quite serious. Nonetheless, the government is also blocking the only bridge out of the area, to prevent the embattled Native Peoples from bringing in reinforcements or evacuating wounded.

Our sitting Democratic President, to whom many appeals have been sent, remains silent. Mr. Obama is proving loyalty to the energy industry by his support for one energy-industry corporation, holding the door open for Trump, backed by the whole industry. If Energy Transfer Partners gets away with this land-grab, imagine what will happen under Trump.

Now is the time to join the resistance. If, glutted with Thanksgiving Turkey, we fail stand up to Obama and support the Indians, we deserve to choke on a bone. Four years is a long time. Let’s not be “good Germans” and wait until its too late.

Here is where you can learn more about Standing Rock, sign the petition, donate money, find out about ongoing actions and become part of them: http://standwithstandingrock.net/take-action/

[5]  “Union officialdom in the United States has been pushing nationalist poison for years and years. Rather than try to organize immigrants and build working class solidarity across international borders to do battle with the multinational corporations that drive working people into the dirt everywhere, Trumka and his ilk push for “partnerships” with the billionaire bosses and blame job and income declines in America on low paid “foreign workers.” Sound familiar? It should; it was the bedrock of Trump’s appeal to the workers in places like Pennsylvania, Wisconsin, Indiana, Michigan and Ohio.” http://insurgentnotes.com/2016/11/some-facts-and-figures-and-a-bit-of-commentary-to-go-with-it/