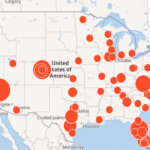 In Atlanta, Georgia on March 16 a gunman killed eight people, in three spas, six of them Asian women. Then on March 22 in Boulder, Colorado, a man with a gun killed ten people. On March 31, 2021, in Orange, California, a gunman murdered four people, one a nine-year-old boy. Since the Atlanta shooting, there have been at least twenty mass shootings in the United States.

Since the late 1970s when they became common, mass shootings have occurred in every region of he country, in cities, towns, and rural areas. They take place in schools, at concerts, in churches, in office buildings and shopping centers. They occur at birthday parties and weddings.

The mass shooters are nearly all male, though they may be white, Black, Latino, or Arab. They may have known the victims or not. The motives may be personal or political, and many of the gunmen seem to suffer from mental illness. While shooters sometimes use handguns, very often the incidents involve assault rifles, high-powered automatic weapons that can hold 30 to 100 rounds.

Mass shootings, like shootings in general, arise generally speaking from social problems: poverty, crime, mental illness, and distressed families. But it is the ready availability of guns that makes such mass murder possible. In America, there are 330 million people and 400 million guns. One can buy a pistol or even an assault rifle for $500. Last year, in part because of the Black Lives Matter protests and the call to defund the police, Americans, mostly white but others as well, purchased another 40 million guns.

While mass shootings dominate the TV news, they are only part of the problem of gun violence in America. Last year almost 20,000 Americans were killed with guns in murders, suicides, and accidents. Many of those deaths result from fights between rival gangs. The City of Chicago had more than 760 murders last year, most by guns, and many gang related.

Most Americans, 60%, now favor stricter gun control laws, up by almost ten percent from a few years ago. At present felons and those certified to be mentally ill cannot buy guns, but, depending on state law, nearly any other adult can. If you cannot buy a gun in your state, you can often cross the state line and buy one.

Yet the U.S. government has proven unable to do anything about this problem. Why is that? Reformers call for licensing of all gun sales, universal background checks, for outlawing large clips, and for ending the sale of assault weapons, giving judges power to take guns from those who pose a danger to themselves or others.

The Republican Party has blocked nearly all gun reform legislation, arguing that it is unconstitutional because the U.S. Constitution’s Second Amendment, which reads: “A well regulated Militia, being necessary to the security of a free State, the right of the people to keep and bear Arms, shall not be infringed.” This is interpreted to mean, anyone can own a gun.

In many states there are large numbers of hunters and some target shooters who fear that the government will take their guns from them. The National Rifle Association, which once simply taught gun safety (as a boy I was a member), became a rightwing movement that supported ownership of guns of every sort. The manufacture and sale of guns is, of course, a multi-billion dollar business that lobbies to promote its industry.

Democrats, especially progressives, have in general supported gun control legislation. The Democratic Socialists of America has no official position, but articles in its journals suggest that DSA too supports gun control. Some American socialists, however, have organized gun clubs, arguing that the far right should not be allowed to control the country’s gun culture.

Despite the horror of continuing mass murder, gang killings, and gun violence of all sorts, with the U.S. Senate divided 51 Democratic votes to 50 Republican votes, it will remain difficult to to pass gun control laws.