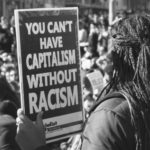 America has seen almost two weeks of protests against the murder of George Floyd. The anger and disappointment against this hate crime and a spate of others over the last few months are palpable. Floyd’s death appears to have sparked a civil rights movement the likes of which Americans have not seen in decades. Even mainstream media are acknowledging the need to address systemic and structural racism in this country.

But as this movement against systemic anti-blackness continues to take shape, and while we protest the brutalities of individual anti-black actors and the institutions they represent, it’s really important that we call out this “system” by its name–racial capitalism, which has always functioned through racial domination and class hierarchies, on appropriated land. Regardless of our race, ethnicity, gender identities, and class positions–and whether we are American citizens, aspiring citizens, permanent residents, or temporary immigrant workers in this country–it’s vital that we confront this truth that, to some of us, might still appear to be “too left-wing” and/or “mere academic talk.” Following the decimation of the Native American tribes and the legacies of the Atlantic slave trade, “democratic” capitalism in America has, since its inception, fed on racialized violence and devalued labor.

This argument, while not novel, is worth reviving and bringing into the public conversation about systemic racism, simply because it still remains unpalatable to many American citizens and immigrants in this country, including some progressive liberals protesting Floyd’s murder and the racial injustice it represents. And in the spirit of making black lives matter, it also makes sense to turn to W. E. B. Du Bois, one of the first black voices to diagnose the workings of racial capitalism.

Written during the Great Depression, Du Bois’s short essay “Marxism and the Negro Problem” remains a hard-hitting primer on this topic. In this essay, Du Bois stresses the importance of racialized labor, specifically the division between African American and white labor that had begun to shape American capitalism since the abolition of slavery in the nineteenth century: “It is white labor that deprives the Negro of his right to vote, denies him education . . . expels him from decent houses and neighborhoods, and heaps upon him the public insults of open color discrimination.” For Du Bois, whiteness is not just a skin color but the system that values the work done by white bodies far more than the work done by African American and other non-white bodies. Non-white labor is integral to the “flourishing” of this system, but it must also be devalued by the system. It is this systemic privileging of white labor that drives a wedge between the black and white working classes, even as both groups are exploited by the white owners of capital. Thus, Du Bois does not romanticize the “American dream.” For him, this dream is also a narrative of exploitation and cutthroat opportunism: “In America, we have seen a wild and ruthless scramble of labor groups over each other in order to climb to wealth on the backs of black labor and foreign immigrants.”

The engine of racial capitalism, then, is not just racism but the desire for socioeconomic mobility that remains bound up with the class and racial status that whiteness represents. Racial capitalism is successful because it is able to sow this desire in the working class. As Du Bois writes: “Common labor in America . . . far from being motivated by any vision of revolt against capitalism has been blinded by the American vision of the possibility of layer after layer of the workers escaping into the wealthy class and becoming managers and employers of labor.” Class mobility becomes a lure for a new managerial “petty bourgeois” class that emerges from the American working class. Crucially, African American and other non-white workers–while having to work much harder than their white counterparts to become petty bourgeois–are not immune to this lure of lucre. The more privileged among the racially oppressed thus come to occupy a contradictory social position. Du Bois sees this group as emulating white labor, exploiting and devaluing “Negro labor . . . here and there” while also facing racial discrimination “since they express . . . the aspirations of all black folk for emancipation.”  Thus, in addition to blatant discrimination, racial capitalism also creates a situation where some minorities (and some progressive whites) protest racism but are unwilling to challenge class hierarchies that sustain divisions both across and within racial categories. Racism and liberal antiracism work together to keep intact the value of whiteness and white capital.

George Floyd was lynched not in 1933 but in 2020. And yet, the fact that he was murdered over a $20 bill tells us that the devaluation of black life and labor remains endemic to what Stephen Gill calls “disciplinary neoliberalism.” The brutal force of the “law” – representing, above all, the interests of individual and white capital–is produced by the same system that ensures that the wealth gap between blacks and whites is still as wide as it was in 1968. This is also the system that acknowledges America’s reliance on the labor of undocumented immigrant  farmworkers, workers whom it calls “essential,” and yet whose health it refuses to protect during a pandemic. Fighting this horrific exploitation and deprecation of racialized labor has to be a priority of any movement to change the system.

At the same time, non-white complicity needs to scrutinize itself while protesting white supremacy. Take the police force for instance. BIPOC [Black, Indigenous and people of color – ed.] activists and scholars are rightly reminding us that the origins of policing lie in slave patrols in the American South. But we also need to confront the reality that the police in its current form, while being primarily white, includes black and other minorities in its ranks. According to a 2015 New York Times report, 25% of America’s police officers are minorities. We don’t need statistics or studies to argue that this diversity has not made the police more racially sensitive. In fact, a 2017 study demonstrated that, as a minority in the police force, African American officers are likely to adhere to the racist and repressive norms of this institution, to prove that they “belong.” Minority police labor serves the interests of white capital, and perhaps not least because it bears the promise of rising above poverty and oppression by representing the law, along with an income that, in 25 of 50 American states, is 150 percent or more than the median salary.

Think here of the complicity of the Hmong American police officer Tou Thao who was managing the crowd while his superior white officer Derek Chauvin asphyxiated Floyd. We cannot, for obvious reasons, equate Thao’s actions with the white privilege and supremacy that Chauvin demonstrated. Rather, Thao’s complicity needs to be viewed through the hierarchy between the Hmong American and the white American in Minneapolis, a long history of socioeconomic tensions between Hmongs and African Americans in that city, the low-income status of the Hmong American community among Asian Americans, and indeed the CIA’s recruitment of Hmong tribesmen to fight communist North Vietnamese in Laos during the Vietnam War.

Dismantling white privilege and  “white fragility,” alongside rethinking policing, are no doubt essential for making black lives matter in the face of white supremacy. But these measures alone, while curbing manifestations of racism, won’t be enough to snuff out its systemic nature. We cannot undo the system of racial capitalism until we also take a hard look at our own complicities with the regimes of labor and profit within which our own lives–non-white and white–remain embedded. Let’s also not forget here the complicity of an administration led by the first African American president, one that contributed very significantly to the militarization of the police and, therefore, very directly to anti-black violence in America. As Keeanga-Yamahtta Taylor reminds us in a recent article in The New Yorker, “the weakness of the U.S. social-welfare state has deep roots, but it was irreversibly torn when Democrats were at the helm.” We cannot unsee this violence while talking about reforming or defunding the police.