An Eco-Socialist Electoral Politics Strategy for 2020 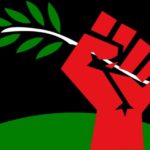 “What Revolutionary Socialism Means to Me” by Sam Farber (on the Jacobin site) is a fine article and deserves to be studied. However, I believe it lacks a detailed strategy for left engagement in electoral politics especially for the 2020 election.

I agree that electoral politics should not be ignored, and that the Democratic Party is the graveyard to progressive politics and that attempts to “take it over” are fruitless. The problem is building a third party or in Sam’s terms supporting “independent and socialist candidates.” How do we do that when the president is arguably the most right-wing and corrupt U.S. president in history and when we have less than a dozen years to radically change world economies before we reach world climate tipping points?

In the last presidential election Jill Stein of the Green Party received 1.45 million votes. An article written before the final electoral vote count was done showed that if all Stein’s votes went for Hillary Clinton and half of Libertarian Gary Johnson’s vote went for Clinton four crucial states would have gone over to Clinton. I know that wouldn’t have happened. Many or most of those voters would just have stayed home and most of Johnson’s people would have voted for Trump. (In 2000, of course, Ralph Nader received 2.9 million votes and was deemed a “spoiler” by liberals. Rather than fighting to change the electoral college liberals have preferred to demonize Nader.) My point is not to argue about these elections, but to claim that even weak as they are, third parties are significant and that the Democratic Party bosses don’t just ignore them.

I had thought the Electoral College was insurmountable until I heard about the growing success of the “National Popular Vote” movement. It’s a way of bypassing the winner-take-all vote within states and with occasional grotesque outcomes of one candidate getting more votes nationally than the one elected by the Electoral College. As they explain it: “The National Popular Vote interstate compact will go into effect when enacted by states possessing a majority of the electoral votes—that is, enough to elect a President (270 of 538). At that time, every voter in the country will acquire a direct vote for a group of at least 270 presidential electors supporting their choice for President. All of this group of 270+ presidential electors will be supporters of the candidate who received the most popular votes in all 50 states and DC—thus making that candidate President.

What does this mean for socialists and electoral politics? First look at parliamentary countries like France.  There the left votes for whichever party they prefer in the first round.  In 2017 the far-left parties combined received over 20% of the presidential vote. In the second round all that remained were Macron and Le Pen.  I assume most on the left then voted for the “lesser of two evils” while some just stayed home.  Now there’s a system that has some merit.  The left can show how much actual support it has in the first round and then in the second round do the practical thing.

Obviously, we can’t duplicate that system in the short run, but can we engineer some work-arounds, like people are doing with the electoral college?  Could we say to the Democrats, “We propose a formal written deal. We are going to run hard to demonstrate the strength of the socialist left. We want to be part of the polls, and the debates and get fair coverage from the media that you control (MSNBC and the like).  If that happens, at the start of November our socialist candidate will cancel her/his campaign and call on all socialists to vote anti-Trump, that is, for the Democratic Party candidate.  If there is no deal or the deal isn’t honored, we’ll campaign hard for our socialist candidate and let the chips fall where they may.”

Is this a viable electoral strategy for socialists?

One friend remarked about this idea, “It’s nothing new.  It’s basically what Bernie Sanders did in 2016.” I disagree. First, Sanders is in all but name a Democrat. He wants people to be canvassing, phone-banking and registering voters for the Democratic Party. I’m talking about building an independent party, one that follows the principles of structure that Sam Farber listed in his piece, like elected officials turning over their salaries to the party and living on a working person’s salary from the party, like office holders being required to vote according to the resolutions of the party.  The strategy I outline would not give any support for the Democratic Party, only a vote for the Democratic candidate against Trump.

Second, Sanders was not allowed to run freely. Clinton’s people did all they could to sabotage his effort, most notoriously with the way she took over the Democratic National Committee 15 months before her nomination.

Third, Sander’s socialism doesn’t go nearly far enough.  He doesn’t demand public take-overs of the fossil fuel producing and using industries and other drastic measures need to overhaul our economy by 2030.  He doesn’t talk about a replacing capitalism with a planned economy with full employment.  His foreign policy statements are weak.  It took him until 2017 to see the Saudi princes as implacable foes.  His criticism of Israeli apartheid and its massacres are tepid at best.  He has not shown any leadership in supporting democratic forces in Syria who have suffered genocidal levels of violence.

How would a socialist (or Eco-Socialist) party be created?  Perhaps the formation of the Industrial Workers of the World in 1905 might give us a clue. In 1905 there were large radical trade union federations bitterly unhappy with the American Federation of Labor. There were also lots of Marxists, anarchists and other socialists looking for a new vehicle with which to organize. They came to Chicago that year and formed the IWW. Certainly there’s nothing like that ferment in U.S. unions, but among the youth and others concerned about collapsing climates there is that energy and anger.  This will increase as both Trumpian eye-shutting and green capitalism prove farcical in the face of environmental catastrophes. These forces and leading feminist, LGBTQ, immigrant rights activists, supporters of Palestinian and Syrian rights and anti-capitalists from within the Green Party could become the core of an independent socialist political party.

Campaign for a socialist and vote for a Democrat for president in 2020; I admit the whole notion gives me the willies. Yet, unless we abandon the electoral realm completely to the Democrats and rely only on getting people into the streets, I don’t see much alternative.  The clock is ticking, the oceans warming and the tipping points growing near.