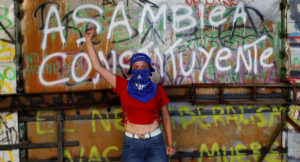 Last week Piñera’s government went from receiving the lowest public approval of any government in Chile’s modern history to a breath of fresh air with the passing of the controversial “El ACUERDO DE PAZ Y NUEVA CONSTITUCIÓN”  (“The Agreement for Peace and a New Constitution”). This truce reached by the government of Piñera has been called “En la Cocina” “In the kitchen,” by large segments of the Chilean population to highlight the closed-door nature of this political agreement.

The agreement was on the cook for hours. It coincided with the anniversary of the assassination of Mapuche leader Camilo Catrillanca on Thursday, November 14th. After a day of large-scale disinformation warfare that included the rumor of another call to the streets by the military, and passed several hours of closed-door meetings and multiple different drafts and proposals, the truce was passed at 3:00AM on Friday, November 15th. Following the passing of the agreement in unison with the government news stations across Chile declared that the leaders of all political coalitions signed “The Agreement for Peace and a New Constitution”.

In a contemporary version of Diego Portales’ “weight of the night” (in which the instituted power works against the masses whilst they are asleep), the whole parliamentary spectrum was there, from far-right Union Democrata Independiente— historically, the most fierce defenders of the Pinochet legacy— to an important faction of the left wing organization Frente Amplio. The only exceptions were the leftists groups Partido Comunista, Partido Humanista, Partido Ecologista Verde, and Convergencia Social.

On that same Friday, hours after the peace agreement, repression escalated once again, with two deaths, dozens injured and blinded, and hundreds detained.

Considered by some a semantic matter rather than a substantial one, the agreement does not speak of a Constituent Assembly; rather, it proposes a plebiscite to be held in April 2020, consisting of two options: a ‘Constituent Convention’ and a ‘Mixed Convention’. The latter corresponds to a mix of current deputies and delegates specially elected for the occasion, while the former would only include new delegates. Moreover, these delegates will be elected with the same mechanisms that are in use today for deputies, giving thus total primacy to political parties over grassroots leaderships. More decisive perhaps, a quorum of 2/3 of approbation is established for every article discussed in the process, and despite that the signers declaring that the Convention will work on a blank slate—implying that there will be no return to the 1980 Constitution— the fact is that no explicit statement about the matter was left on the writing. Finally, an ad-hoc technical commission designated by the current parliament will define other important aspects of the process.

In this light, the semantic lapse can well be read as the questioning of the very possibility for a constituent power to take place. The Constituent Assembly is a sovereign body that, by its very definition, places itself on top of any other constituted political body; in contrast, the current agreement ties up from the outset the terrain and conditions in which the discussion takes place. Translated into realpolitik, this means that constituted powers—in Chile, the conservative/neoliberal bloc—will still hold the lion’s share over the destituent/constituent movement.

We can see that the sovereignty that belongs to the definition of a Constituent Assembly is made impossible with Piñera’s agreement, in which a number of constraints is established to tailor the process to the size of the veto-power that the right-wing has historically profited from, thanks to the constitutional ties that have made globally infamous the 1980 Constitution.

Some Gains for the Constituted Power (So Far)

It may appear as if the government has merely been trying to suppress the conflict; however, the reality is much more dramatic. In fact, the right-wing agenda of public security has been pushed forward with enormous celerity, and which started with the criminalization of fare-hikes evasion has given place to a pronounced criminalization of the protest that includes harder penalties for barricades, the use of hoods, and the vandalization of public and private property, along with a more extensive use of the so-called anti-terrorist law for “committing or inciting to” acts of violence.

Furthermore, the capacities of air-vigilance and the extension of protected faceless witnesses have been extended. There is also more protection for the police and the military, in what seems to present impunity for past and present human rights violations. To this regard, Chile’s chief of police has declared that he will not fire any police officer in service anymore. All this looks like the restoration, even reinforcement of the right-wing doctrine of national security, foundational to Chile’s current regime.

Since the very moment the agreement was announced (but especially after the death of Abel Acuña in a demonstration on Friday in a police procedure that prevented him to be assisted in a heart-attack), the overwhelming majority of the social organizations giving momentum to Chile’s Spring are calling to reject the agreement altogether. This, against a manufactured climate of fear to the military, nostalgia of normality and new media-induced doses of trust to the old institutional apparatus, and moral blackmail against anyone who criticizes the agreement as meeting ends with the far-right. Several reasons converge in the rejection.

First, the agreement totally lacked the input of on the ground social organizations, precisely in the moment in which both Piñera’s government and the parliament showed historical levels of disapproval. Among the absent actors, it is worth mentioning the platforms Mesa de Unidad Social (Social Unity, composed by 70 social movements, unions and grassroots organizations) and Bloque Sindical (Workers-Union Bloc, a gathering of the major worker unions inedit in recent times), to which it is necessary to add thousands of self-convened local assemblies in Chile and Chilean communities abroad— demonstrating that the process of a Constituent Assembly (if not its institutional container) is already in the making.

Second, the agreement’s constraints make it a tailored suit for the de facto powers, the same who came on Friday, November 15th to celebrate and cherish the agreement—first and foremost, financial investors, billionaires and big businessmen. Even the Line 4 of the subway opened that day, after announcements saying it would take months to make it back into operation. Yet the Chilean people still have a living memory of what a capital’s strike is.

Third, it does not say a word about the social agenda that social movements and organizations are demanding in a radically democratic way: along with a new constitution by means of a truly sovereign, plurinational and gender-parity Constituent Assembly, the main demands go from the nationalization of basic resources (water, copper and lithium among them) and social services such as urban transportation, immediate increase of pensions and an end to the private system, and a minimum wage of $500.000 (US$650) monthly, among many others.

Last but not least, there is no mention of the concrete means to achieve the announced social peace—only the criminalization agenda stands. The agreement soundly avoids a demand that remains at the core of the movement since the October 19 curfew, namely, reparations for the multiple human rights violations that have occurred during the conflict. More concretely, the demand is to form a Commission of Truth, Justice and Reparation that guarantees impartiality, after more than 2.300 injured (222 of which lost one of two of their eyes), almost 7.000 arrested (a 10% of them children), and 22 deaths, as official accounts say.

The people of Chile mourn those 22 fallen comrades as their own flesh, with declarations of Never Forget Nor Forgive spreading day after day. Also a thorough reform to both the police and the army have also emerged as transversal claims by the people.

The left started the cycle of protests organized around two coalitions: Unidad para el Cambio (Unity for Change, grouping the Partido Comunista, Federacion Regionalista Verde Social, and Partido Progresista) and Frente Amplio (Broad Front, including Revolucion Democratica, Partido Comunes, Partido Humanista, Partido Liberal and Convergencia Social among others). The markedly anti-party discourse of both the street demonstrations and the self-convened assemblies made it difficult for the established parties to validate their discourses among the mobilized people. Nonetheless, more than a mere rejection of the existing parliamentary parties as such the movement indicated a deep mistrust towards institutional politics and political organizations— pure destituent power.

And then, the government’s siren called accompanied by covert and overt signals of the possibility of a state of siege enough to attract most of the left to the “kitchen”, first to discuss and then to sign the peace agreement. With the exception of Humanistas and Comunistas, the Broad Front attended in bloc and even tried to take the lead in the negotiations, due to Gabriel Boric’s (Convergencia Social) role in the Congress’ Constitution Commission.

Paradoxically, Convergencia Social abandoned the “kitchen” without signing up, once the motion of a quorum of 3/5 (rather than the convened 2/3) was definitely dismissed. But in an act justified as “republican responsibility”, Boric signed up individually and later appeared as the main spokesman of the agreement. To further obscure the final picture, after a Thursday of public criticism from outside the kitchen, the next day the Partido Comunista came out to publicly cheer and thus validate the agreement.

At the weakest moment of Pinera’s government, the left contributed to the attempt of closing from above— from the constituted power— what was opened a month ago from below— from a constituent movement in the making.

The agreement demonstrated, first, ideological and tactical differences within the left. This, in turn, has led to a bleed-out, especially in the Broad Front. Boric has declared he will not resign from Convergencia Social, even when he acted in contradiction to the party’s decision; on Thursday, he waa suspended until the final decission of the Supreme Tribune of the party. This has provoked massive relinquishments of file-and-rank members and the public resignation of Jorge Sharp, mayor of Valparaiso (Chile’s second major city and location of the Congress) to the party. To a lesser extent, Revolucion Democratica and Partido Comunes are also suffering flows and convulsions. Resignations to the Broad Front as coalition already begun.

No doubt the agreement has damaged the convocation to protests, reinforced the information siege, and facilitated a scot-free intensification of repression. Some of the same triumphal voices of Friday are today acknowledging that, perhaps, the alleged guarantees of the agreement were not guaranteed at all.

After a month of protests, the following days will be crucial for the destituent/constituent movement to reverse the manoeuvre that pushes the power balance back again in the hands of the constituted power. For, while the majority of the political class celebrates the historical agreement that allegedly brings Pinochet’s constitution to an end, the vast majority of the social and popular organizations (workers, feminists, indigenous peoples, and grassroots assemblies) are calling to reject it altogether and continue the mobilization towards a new general, plurinational strike, to definitely change the power balance that shapes institutional politics in the first place.

In times of potential structural transformations in the social geography, with the current powers and institutions—the constituted order—in its more authoritarian disposition, ready for the return of Portales’ “weight of night”—the radical left needs to quickly shake off its liberal tendencies, renounce the tactics of only “influencing” (incidir en) public policies and institutional spaces, and accompany the agreement of the many, in which the meaning and practice of democracy has been contested back, expanded, and projected beyond neoliberal arrangements. If it is not already too late!